One person is confirmed dead in a fiery crash that closed all lanes of I-75 and Fowler Avenue in both directions.

HILLSBOROUGH COUNTY, Fla. — One man is dead after a tractor-trailer carrying tomatoes ran off an I-75 overpass and landed on a car below in Hillsborough County.

The fiery crash on Tuesday afternoon closed I-75 and Fowler Avenue, but as of Wednesday morning, all lanes have reopened. 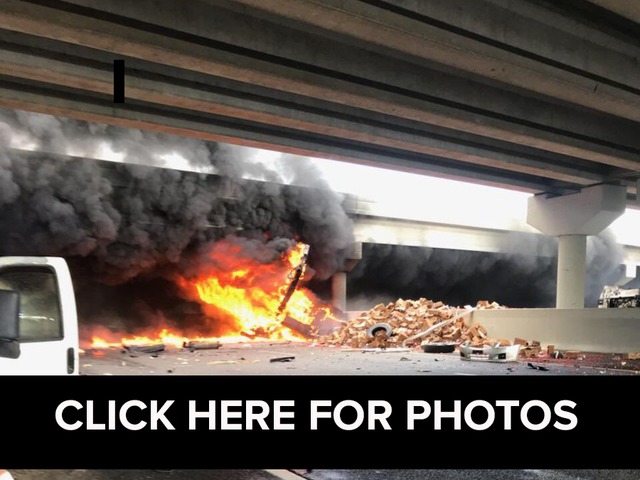 FHP says a tractor-trailer hauling tomatoes and a SUV crashed while traveling southbound on I-75 around 4:08 p.m. Tuesday.

The impact caused the tractor-trailer to tumble over the I-75 overpass onto Fowler Avenue and land on top of a car traveling below, killing the driver.

Five patients were transported from the scene.

Troopers say the crash involved at least four other vehicles.

Authorities say the crash started when a Toyota Sequoia driven by Jennifer Boynton, 40, of Belleview, entered the NB entrance ramp to 75 and lost control. The SUV spun across the NB lanes and into the path of the tractor-trailer driven by Angel Catalan, 63, of Port St. Lucie.

The vehicles collided, and the tractor-trailer hit the barrier wall along the Fowler Ave. overpass and toppled over.

It landed on top of a Hyundai Santa Fe driving on Fowler, killing an unidentified driver.

The semi and Santa Fe caught fire and burned extensively for more than 20 minutes.

An axle from the tractor portion separated and collided with a fifth vehicle in the SB lanes of I-75.

After inspectors evaluated the bridge for damage, all lanes of I-75 and Fowler Ave. reopened.

"It was pretty traumatic. Worst thing I’ve ever seen in my life,” he said.

He saw the semi-truck airborne as it fell from the overpass.

"By the grace of God I wasn’t ten seconds down the road or it would have landed on my car. I was literally the car next to go under that bridge," he said.

Hillsborough County Fire Rescue says that an explosion was involved.