Brinks driver out of the hospital

The desperate search continues for a man suspected of shooting a Brinks truck driver and a Good Samaritan in Hillsborough County on Friday.

BRANDON, Fla. — The desperate search continues for a man suspected of shooting a Brinks truck driver and a Good Samaritan in Hillsborough County on Friday.

Earlier in the day, Hillsborough County Sheriff Chad Chronister said a Brinks driver was shot twice when a black male attempted to rob him while he was working to replenish cash in the ATM at the entrance of GTE Financial, located on East Bloomingdale Avenue in Brandon.

The Brinks truck driver was released from the hospital on Saturday.

Chronister went on to say, "A Good Samaritan, sitting in a vehicle waiting for his wife to come outside from the bank, saw that the guard was struggling with the would-be robber and went out to also try to give him a hand. While attempting to help this Brinks Security driver, he was also shot."

Chronister visited the Good Samaritan Saturday. The sheriff's office said he's a retired Hillsborough County employee and said he told them if he had to do it all over again, he would.

"We are thankful for the bravery of this Good Samaritan. His actions saved the life of the Brinks truck driver who was the target of this would-be robber," Chronister said in a statement Saturday.

After shooting the Brinks driver and Good Samaritan, what was believed to be the suspect's get a way vehicle was found at an apartment complex down the street and a K9 tracked to one of the buildings, according to Chronister. 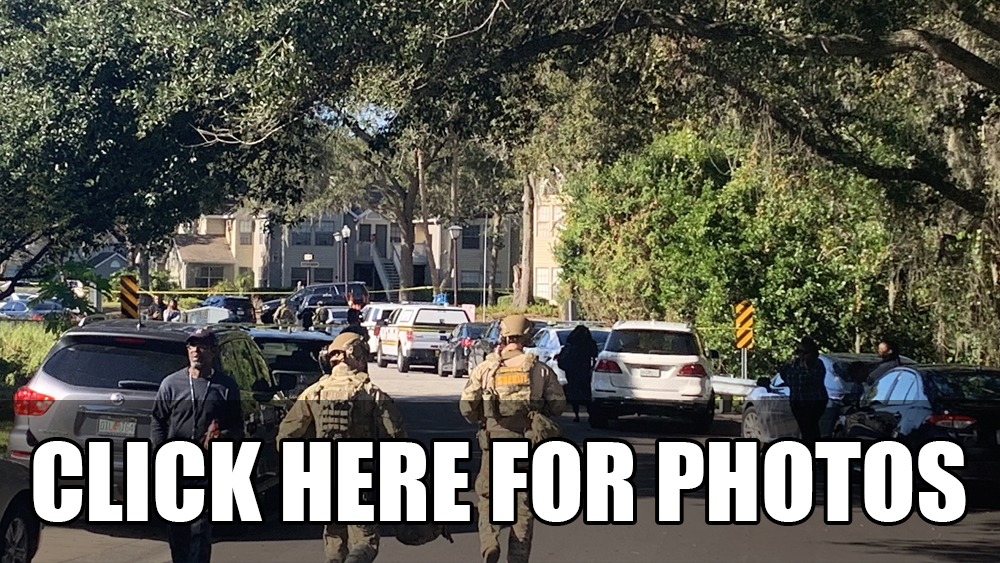 "Believe me when I tell you when he's become ever increasingly violent. This is a priority [deputies] will continue to follow every lead. We will make it a priority," Chronister said.

Chronister said they believe the suspect got into another vehicle before fleeing.

"It’s obvious now that this suspect has become much more brazen. We can’t say with entire certainty that this is the same suspect the suspect that’s been involved in other robberies of these other banking institutions he certainly does match the same description," he said.

Deputies released two surveillance photos of the suspect on their social media page.

The Good Samaritan is out of surgery, according to Chronister. As for the Brinks driver, he was shot once in the back ballistic vest and once in the lower torso. He was released from the hospital on Saturday.

When initial reports were released about the attempted robbery shooting, Action Air 1 flew over the scene where crime scene tape could be seen around the bank and a Brinks truck.

Witnesses ABC Action News spoke to over the phone said they saw several ambulances at the scene and witnessed at least one person being taking away on a stretcher.

Due to the nature of the incident, many schools in the area were placed on lock-in. However, the school district says that lock-in has since been lifted.

The 14 schools that were impacted included:

Officials with GTE Financial responded with the following statement about the incident:

“We have just been alerted about an attempt of robbery targeted to the external ATM in our GTE Financial branch located in Brandon. We are cooperating with law enforcement and doing everything in our power to ensure the safety of our members and employees.”

"Our thoughts and prayers for a speedy recovery are with our colleague who was injured this morning. Since this incident is part of an active criminal investigation, we can only say that we are working closely with local and federal law enforcement."