The City of Tampa’s transportation department has released it's year-long study on one way to try and fix downtown traffic jams.

TAMPA, Fla. — The City of Tampa's transportation department plans to add only one in extension as part of its Streetcar system, but they are looking at three different corridors to see what would be the best option to extend north.

The City of Tampa’s transportation department has released it's year-long study on one way to try and fix downtown traffic jams.

For the past year, the city has hosted four public meetings and received public feedback on their streetcar system and ways to expand it.

The plan is to expand the TECO Streetcar as part of their InVision approach to transforming Tampa’s transit.

In a presentation Wednesday to Hillsborough County’s Metropolitan Planning for Transportation – city leaders showed maps of the three different corridors where they may choose to place one, possibly two more tracks. 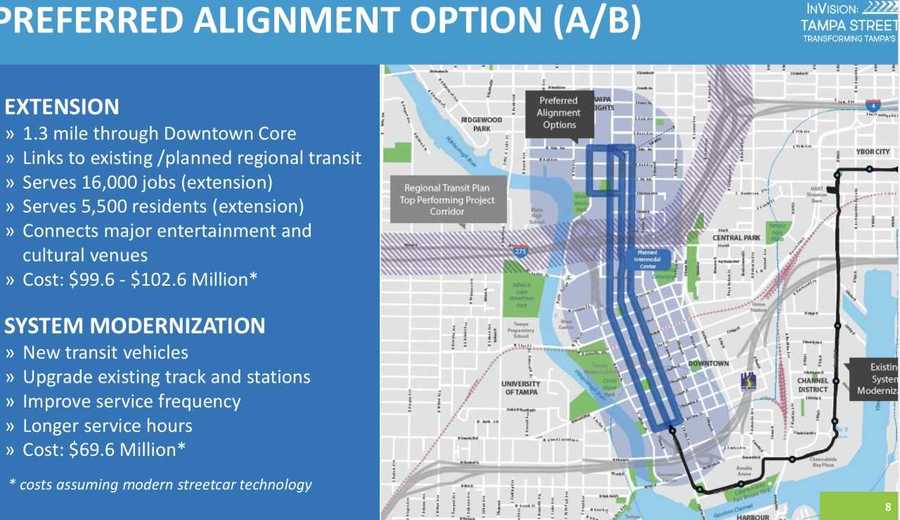 Numbers show ridership is down almost 8,000 people from 2015 to 2017, but they have a plan to fix that by making the streetcar more valuable to locals by expanding the routes and making them more frequent.

Right now the trolley system starts at noon on weekdays, except Friday and the stops run every 30 minutes.

The plan would be to increase the frequency to boost numbers and to encourage people who live and work in the area to use the transit system instead of cars.

Maps show three different corridors where the streetcar could extend, the options include: Tampa Avenue, Florida Avenue and Franklin Avenue.

City leaders say they are heading into the second phase of the study, which they hope to have approved by Summer.

If they can expand the streetcar system they think it could link to future mass transit systems.

Editors Note: This story has been corrected to say that the city will be choosing only one of the three different corridor options.