'Back the Blue' mural painted outside Tampa police headquarters vandalized 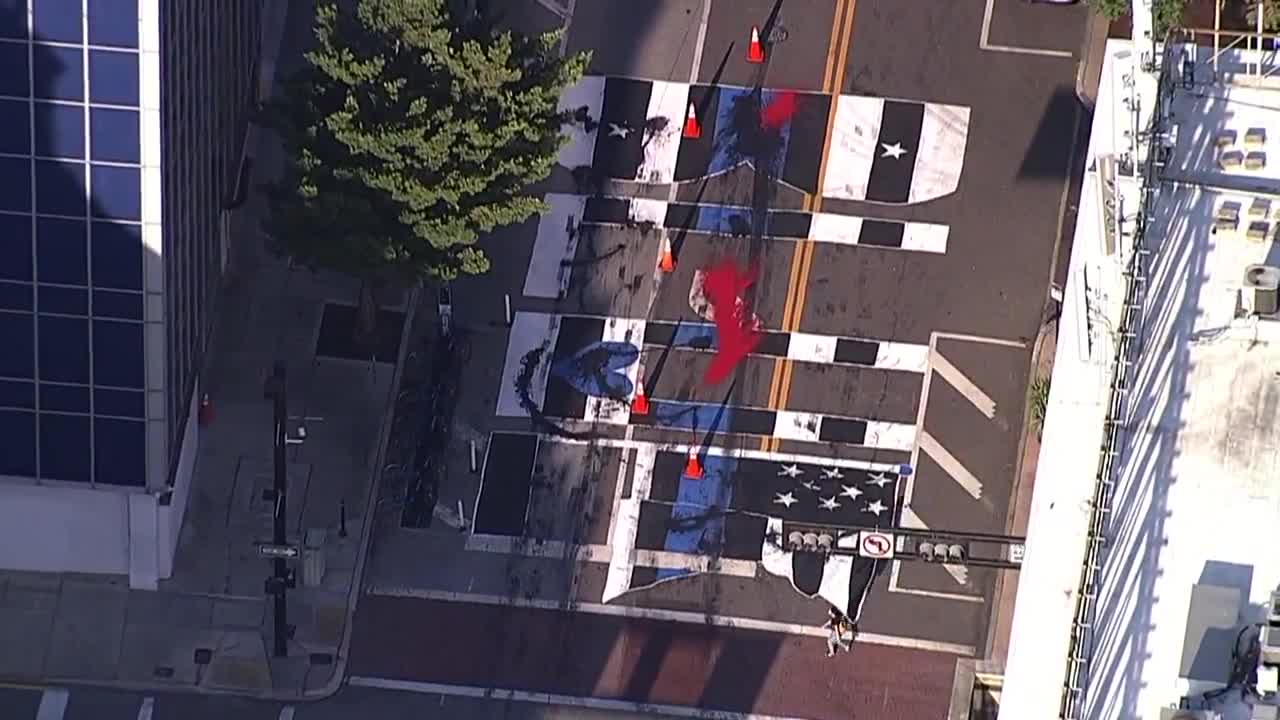 An unapproved "Back the Blue" mural that was painted outside of the Tampa Police Department headquarters over the weekend has been vandalized. TAMPA, Fla. — An unapproved "Back the Blue" mural that was painted outside of the Tampa Police Department headquarters over the weekend has been vandalized.

On Saturday, about 40 people came together and painted the mural on East Madison Street in downtown Tampa.

According to the Tampa Police Department (TPD), around 10 p.m. on Tuesday, a subject wearing all-black clothing and a black mask poured a substance resembling tar over the mural. The subject was seen on camera circling around the TPD headquarters prior to the vandalism, police said.

A little after 12:30 a.m., a second subject graffitied "F*** 12 and BLM" in red spray paint on one of the doors along the north side of the TPD headquarters, police said. The second subject also poured red paint on the "Back the Blue" mural.

Part of East Madison Street between Florida Avenue North and Franklin Street were closed for hours before reopening due to the tar on the road.

The mural drew criticism and support online after it was painted. A City of Tampa spokesperson said the mural was not approved by the city.

TPD said it is investigating the vandalism.

"The Tampa Police Department expects everyone to express themselves in a lawful manner. Murals painted in the city roadway need to be approved. We will continue to work with any group to make sure their first amendment rights are heard," said TPD Chief Brian Dugan in a press release.

RELATED: 'Back the Blue' mural painted outside Tampa police headquarters, city says mural was not approved

“Any tribute to honor their service is welcome. It’s unfortunate they didn’t see the permitting process through so that our community could participate in showing their appreciation for the brave men and women that service our residents every day," said Mayor Jane Castor.

A Change.org petition criticizing the mural said, "This mural seems to mock the Black Lives Matter movement and is a huge slap in the face for all the protesting we have been doing all over this country."

The group behind the mural said it got verbal approval from Mayor Castor's office. They said it was created to show support for law enforcement.