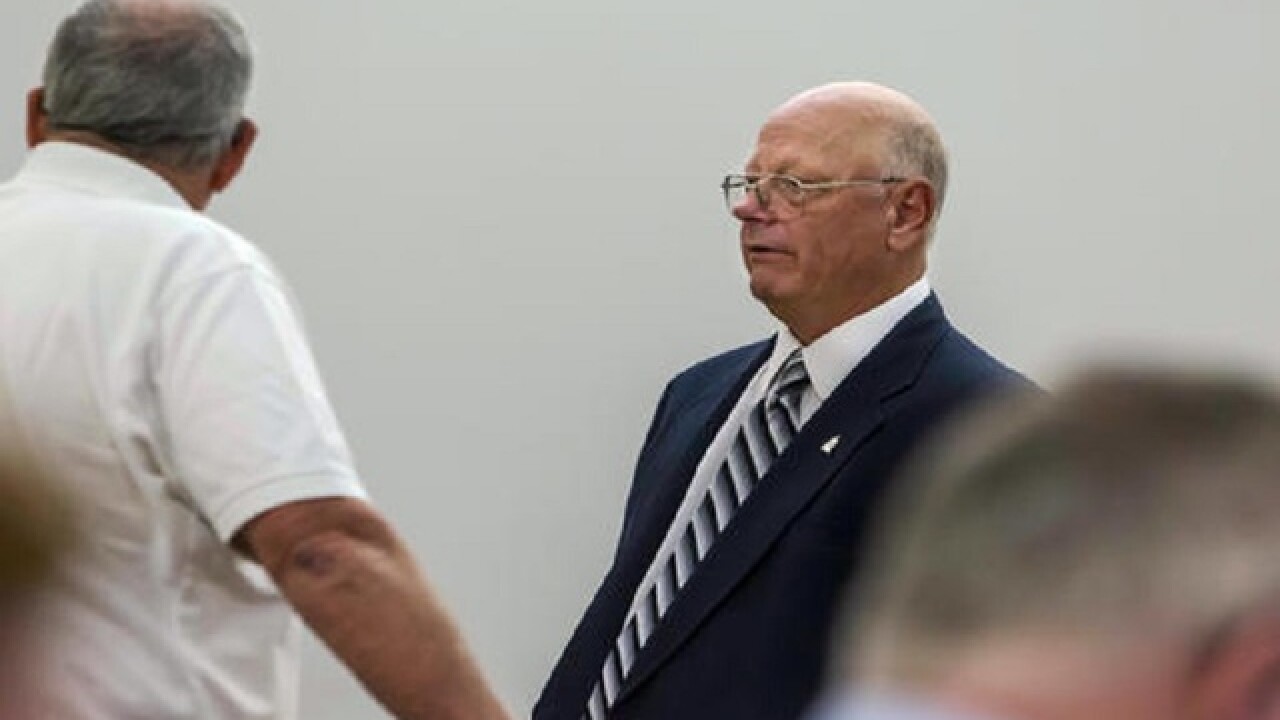 Gregory J. Lamoureux
<p>Vermont state Sen. Norman McAllister stands in court during recess on the first day of his trial on two counts of sexual assault Wednesday, June 15, 2016, in St. Albans, Vt. The 69-year-old Republican lawmaker was suspended from his legislative post in January, and could get up to two life sentences if convicted on the two sexual assault charges. (Gregory J. Lamoureux/County Courier via AP, Pool)</p>

ST. ALBANS, Vt. (AP) — A former legislative assistant to a Republican state senator testified Wednesday that he forced her into oral sex and intercourse at his home farm where she worked.
Sen. Norman McAllister, on trial on two counts of sexual assault, sat stoically at the defense table as the woman testified that he forced her to have oral sex in a barn at his farm and intercourse at his home.
Later, one of McAllister's defense lawyers, David Williams, got the woman to acknowledge she had changed key aspects of her story from what she told police on the day McAllister was arrested, to pretrial sworn statements to lawyers, to her testimony to the jury earlier Wednesday.
The 4-foot-11 woman, who weighs less than 100 pounds, spoke of up to 30 incidents in which she said the 64-year-old McAllister, a foot taller and 230 pounds, overpowered her.
"He put me on the bed. He was holding me down," the 21-year-old woman said. "I was still saying I did not want this to happen."
She said there was "so much weight" and "I'm not very strong."
Williams contrasted her statements to police about up to 30 assaults with her statements to him in a sworn pretrial deposition that there were four.
McAllister has maintained his innocence throughout. Williams asked a series of questions toward the end of the day Wednesday aimed at persuading jurors that the woman was worried her then-boyfriend was upset about her having a sexual relationship with McAllister and that the rape allegations were aimed at placating him.
One question not directly answered in Wednesday's testimony was whether there had been a consensual sexual relationship between McAllister and the woman.
Williams devoted much of the afternoon to highlighting what the woman acknowledged were numerous inconsistencies in her sworn statements.
Williams pointed to a pretrial deposition in which the woman said McAllister first sexually assaulted her "the very first day I started" working on his farm. He contrasted that with her testimony earlier Wednesday that the first sexual assault didn't occur until two or three weeks into her employment on McAllister's farm.
He also questioned why she continued working for McAllister, including volunteering on his 2014 re-election campaign, if he had been sexually assaulting her repeatedly.
The trial is expected to include testimony from some of McAllister's legislative colleagues. And he faces another trial in the case this fall on sex offenses involving two other women.
The start of the trial Wednesday was delayed when the state requested that McAllister's accuser be neither videotaped nor audiotaped. A lawyer for the Burlington Free Press and other media members objected, particularly to any ban on audio recordings of her testimony.
A hearing on the issue stretched through the morning before Judge Robert Mello ruled that audio recordings would be allowed but not video or still photos of the woman
In another media-related issue, lawyers agreed that the testimony of two reporters would not be needed, because the state and defense were able to agree on introduction of evidence the reporters would have been called to provide. Both of the journalists, Mark Davis of the Burlington weekly newspaper Seven Days and Peter Hirschfeld of Vermont Public Radio, had been slated to testify about interviews they had had with McAllister.
Copyright 2016 The Associated Press. All rights reserved. This material may not be published, broadcast, rewritten or redistributed.