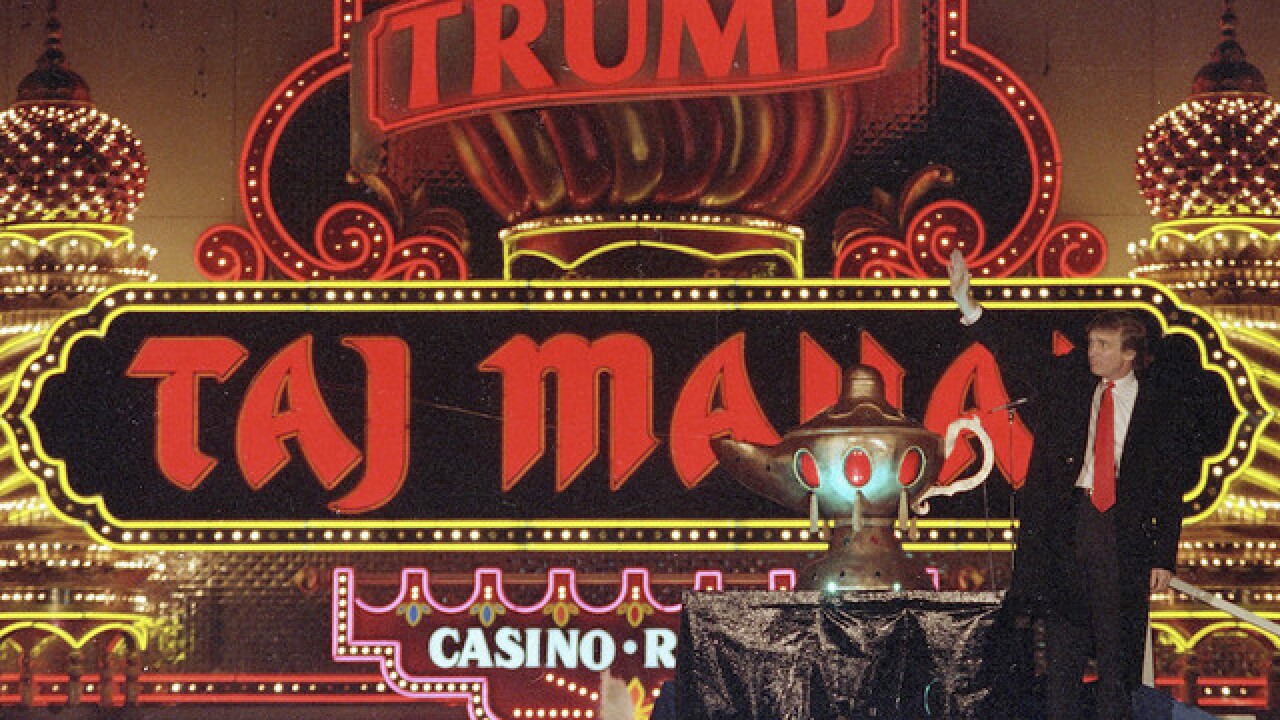 Copyright Associated Press
Mike Derer
<p>In this April 5, 1990 file photo, Donald Trump stands next to a genie lamp as the lights of his Trump Taj Mahal Casino Resort light up the evening sky marking the grand opening of the venture in Atlantic City, N.J. </p>

Donald Trump opened the Trump Taj Mahal casino 26 years ago, calling it "the eighth wonder of the world."

But his friend and fellow billionaire Carl Icahn closed it Monday morning, making it the fifth casualty of Atlantic City's casino crisis.

The sprawling Boardwalk casino, with its soaring domes, minarets and towers built to mimic the famed Indian palace, shut down at 5:59 a.m., having failed to reach a deal with its union workers to restore health care and pension benefits that were taken away from them in bankruptcy court.

Picketers affixed an anti-Icahn poster that they had signed to the casino's main Boardwalk entrance door. It proclaimed "We held the line."

"We held the line against a billionaire taking from us!" said Marc Scittina, a food service worker at the Taj Mahal's player's club since shortly after it opened in 1990. "This battle has been going on for two years."

The union went on strike July 1, and Icahn decided to shut the place down a little over a month later, determining there was "no path to profitability."

The Taj Mahal becomes the fifth Atlantic City casino to go out of business since 2014, when four others shut their doors.

But this shutdown is different: it involves a casino built by the Republican candidate for president, who took time out from the campaign trail to lament its demise.

Chuck Baker, a cook at the Taj Mahal since the day it opened in April 1990, was on the picket line at the moment it shut down. He was there when the doors opened and wanted to be there when they closed.

He led a moment of silence among the otherwise rowdy 200 or so picketers on the Boardwalk outside the casino.

"This didn't have to happen," he said. "To (Icahn), it's all just business. But to us, it's destroying our livelihoods and our families. You take away our health care, our pensions and overload the workers, we just can't take it."

Bob McDevitt, president of Local 54 of the Unite-HERE union, said virtually all of the striking workers feel the same way.

"Everybody has their Popeye moment: 'That's all I can stands; I can't stands no more,' " he said. "The workers made a choice that they weren't going to accept benefits and terms of employment worse than everyone else's. I applaud them: For the first time in 30 years, workers stood up to Carl Icahn and made him throw in the towel."

Icahn reached his limit on Aug. 3, when he determined the $350 million he had lost investing in, and then owning, the Taj Mahal was enough. It was then that he decided to close the casino, fearing he would lose an additional $100 million next year.

"Today is a sad day for Atlantic City," he said Monday. "Like many of the employees at the Taj Mahal, I wish things had turned out differently."

With yelling, chanting workers just outside the glass doors, Taj Mahal workers had trouble locking them, trying to jam wooden wedges into door frames to keep them from opening. Finally they succeeded in affixing barriers to the doors.

The Taj had actually been shutting down slowly for nearly two weeks. Many table games were left unstaffed, and workers cordoned off entire banks of slot machines with yellow caution tape last week as others ripped the electronic guts from them. Liquor had been removed from some service bars, and even soap dispensers disconnected from bathroom walls.

Trump said he will demand that his name come off the building now that it is closed, as he similarly did with Trump Plaza after it, too, closed in 2014. As of last week, a sign over the main entrance that had proclaimed "Donald J. Trump presents Taj Mahal" was already gone.

The Taj Mahal joins the Atlantic Club, Showboat, Trump Plaza and Revel as Atlantic City casinos that, since 2014, have succumbed to economic pressure brought about in large measure by competition from casinos in neighboring states. The city now has seven casinos.