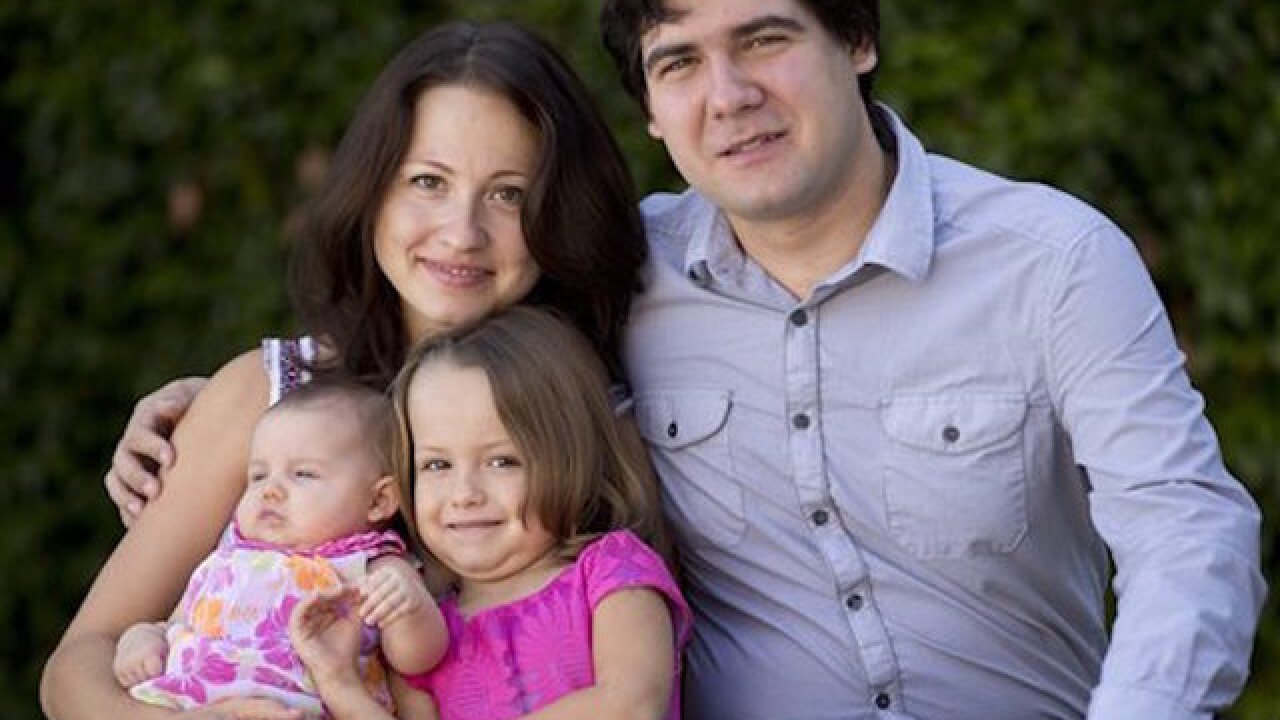 Joyce Marshall
<p>FILE - In this 2014 file photo, award-winning concert pianist Vadym Kholodenko, poses with his wife Sofya Tsygankova and daughters Nika, 4, and Michela, at their home in Fort Worth, Texas.. (Joyce Marshall/Star-Telegram via AP) MAGS OUT; (FORT WORTH WEEKLY, 360 WEST); INTERNET OUT; MANDATORY CREDIT</p>

BENBROOK, Texas (AP) — An award-winning concert pianist arrived at his estranged wife's home to pick up their two daughters and found the girls slain in their beds, police said Friday. Authorities say their mother, who had suffered knife wounds, faces a mental health exam.

Vadym Kholodenko stopped Thursday morning at the home where he formerly lived to pick up Nika, 5, and 1-year-old Michela, Benbrook police Cmdr. David Babcock said. The Ukrainian-born musician found his wife, Sofya Tsygankova, in an "extreme state of distress" and discovered the dead girls. The pianist then called 911, police said.

Kholodenko, a previous winner of the Van Cliburn International Piano Competition in Fort Worth, is not a suspect and is cooperating with police, Babcock said. Police said no suspects were being sought in the deaths of the girls or the stabbing of Tsygankova, who was recovering Friday at a Fort Worth hospital.

"At this time we don't believe that there's any immediate risk to anybody in the neighborhood," said Babcock. The wife was being held on a mental health evaluation, he said.

Autopsy results were pending on the children, who had no visible trauma, police said. Tsygankova's wounds were from a knife, said Babcock. He declined to say whether a knife was recovered at the home.

Hospital officials declined on Friday to release a condition on Tsygankova, who was born in Russia.

The couple had married in 2010 and filed for divorce in November, according to Tarrant County court records. Police had responded twice in 2014 to disturbance calls at the suburban Fort Worth residence, said Babcock.

Kholodenko had won the Van Cliburn International Piano Competition, named for the internationally known classical pianist, in 2013. It is held every four years in Fort Worth. Cliburn died in 2013. Kholodenko had been scheduled to perform this weekend with the Fort Worth Symphony Orchestra. Another soloist, Alessio Bax, was replacing him, the orchestra said.