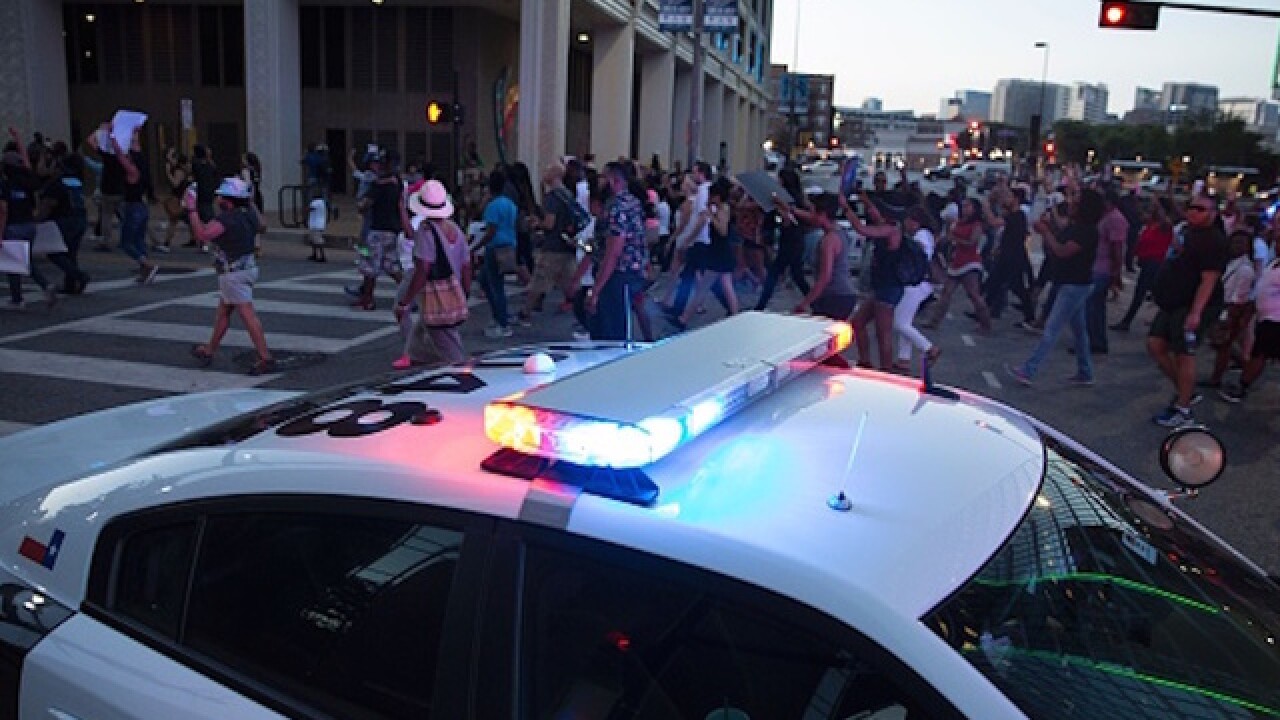 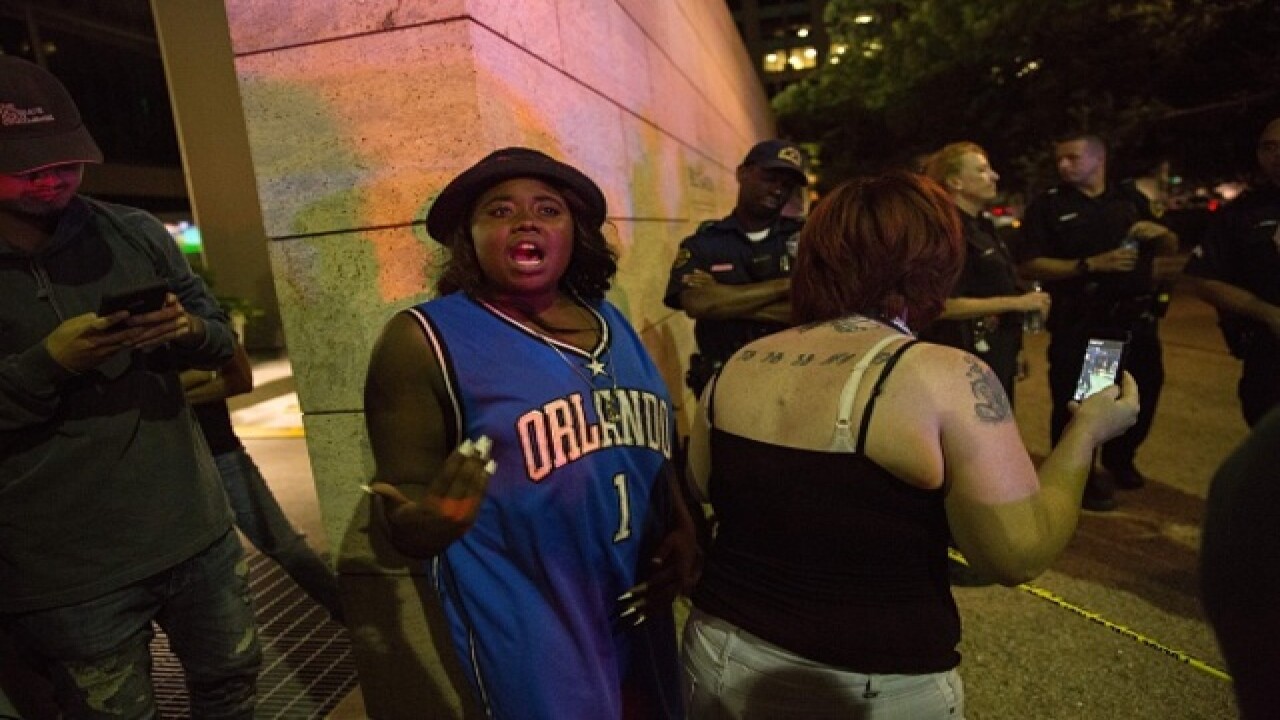 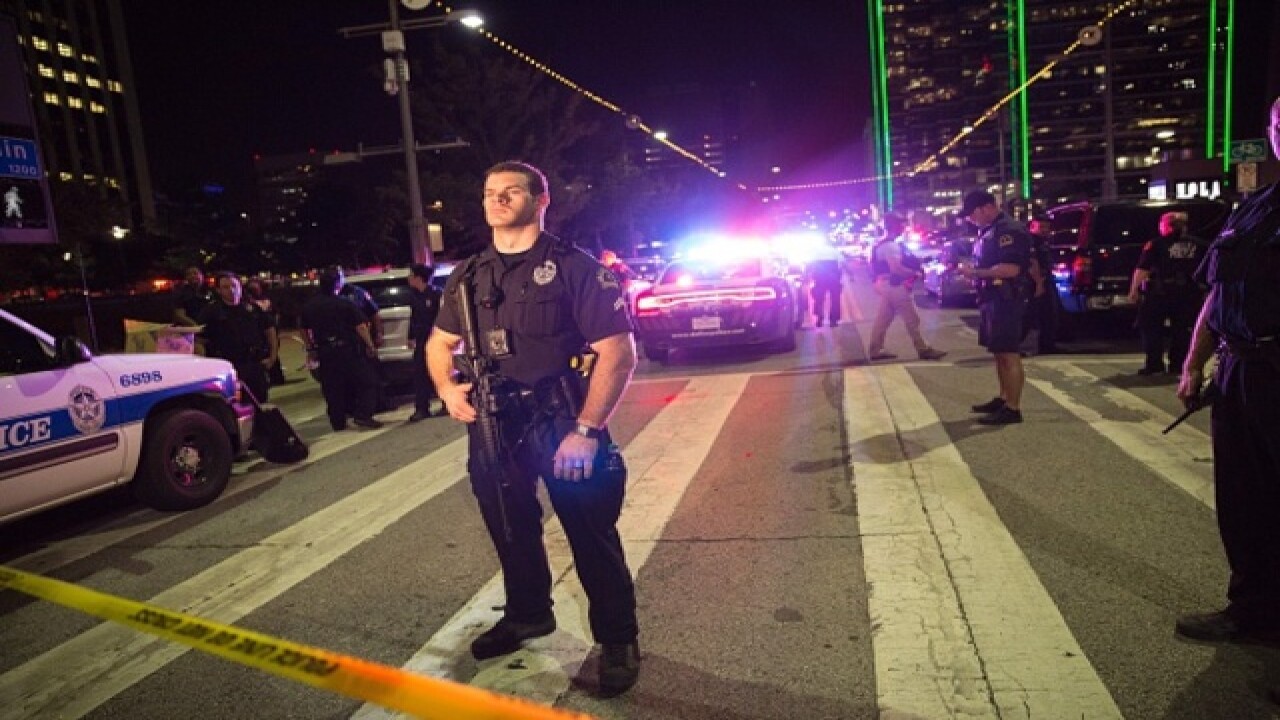 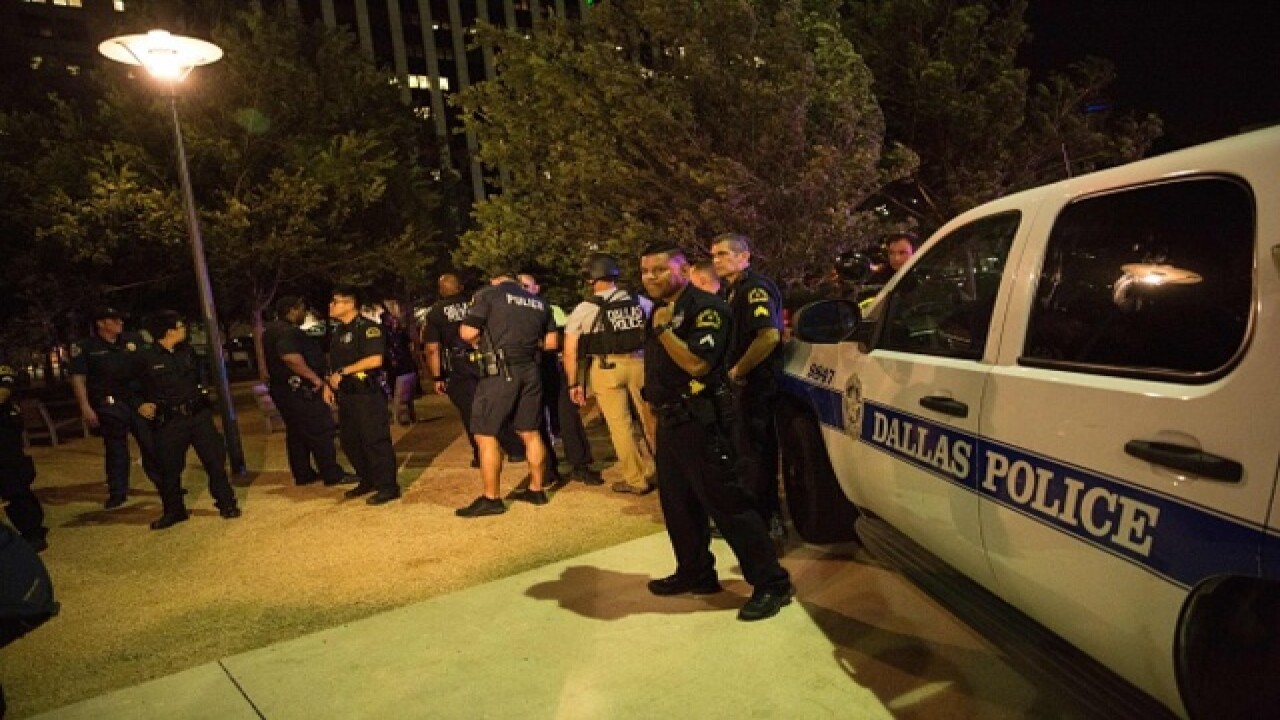 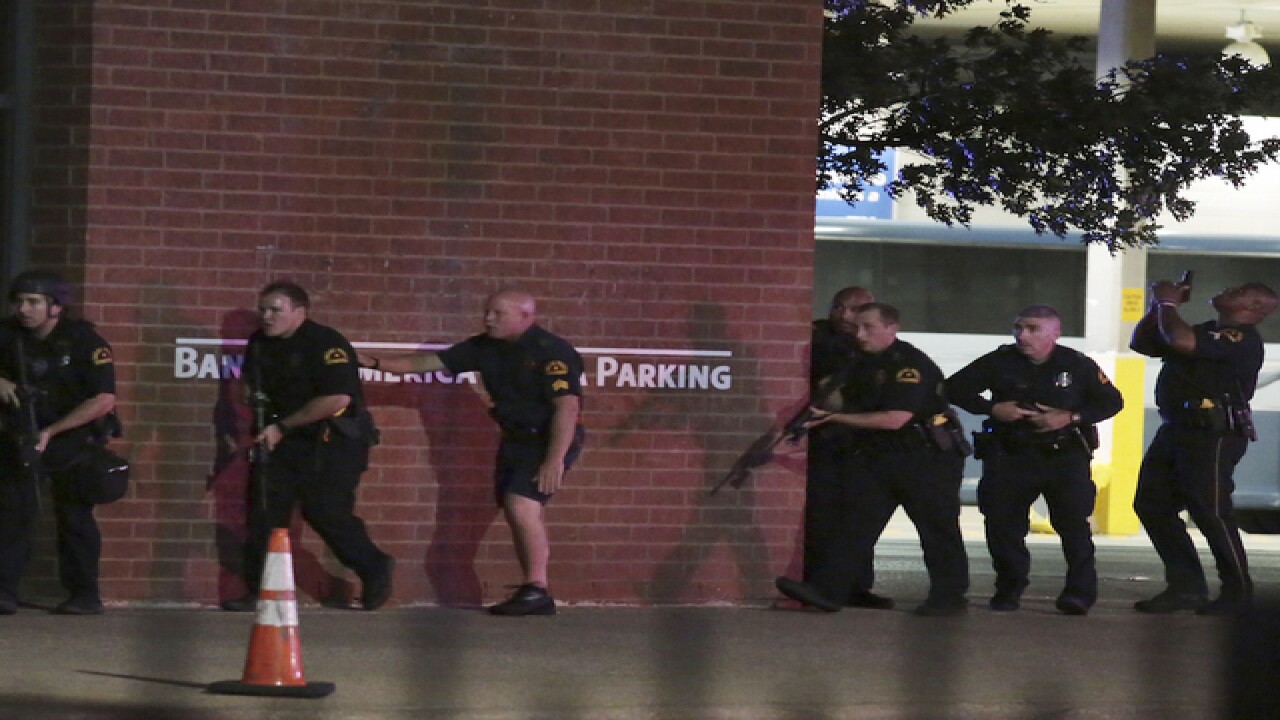 DALLAS (AP) — Dallas was in shock and beset by uncertainty early Friday after at least one gunman shot and killed five police officers and wounded seven during a peaceful protest over fatal police shootings of black men in other states, police said, in bloodshed evoking the trauma of the nation's tumultuous civil rights era.

Police Chief David Brown blamed "snipers" and said three suspects were in custody while a fourth had exchanged gunfire with authorities in a parking garage downtown and told negotiators he intended to hurt more law enforcement officials.

That fourth suspect was eventually identified as Micah Xavier Johnson, 25, of Texas.

"We don't exactly know the last moments of his death but explosives did blast him out," Rawlings told The Associated Press.

He said police swept the area where the standoff took place and found no explosives.

Police did not identify any of the other potential suspects. Brown said Johnson had declared before his death that he was upset about recent shootings and wanted to kill whites.

Brown said it appeared the shooters "planned to injure and kill as many officers as they could." Video from the scene showed protesters marching along a downtown street about half a mile from City Hall when shots erupted and the crowd scattered, seeking cover.

The attacks made Thursday the deadliest day for U.S. law officers since the Sept. 11, 2001, terrorist attacks, according to The National Law Enforcement Officers Memorial Fund, which tracks on-duty deaths.

It also drew a comparison with November day in 1963 when a U.S. president was slaughtered by a sniper on a Dallas street only a few blocks away.

"I think the biggest thing that we've had something like this is when JFK died," resident Jalisa Jackson downtown said early Friday as struggled to fathom the still-unsettled situation. Officers crouched beside vehicles, SWAT team armored vehicles arrived and a helicopter hovered overhead.

It has been a devastating night. We are sad to report a fifth officer has died.

Protests were held in several other U.S. cities Thursday night after a Minnesota officer on Wednesday fatally shot Philando Castile while he was in a car with a woman and a child, the shooting's aftermath livestreamed in a widely shared Facebook video. A day earlier, Alton Sterling was shot in Louisiana after being pinned to the pavement by two white officers. That, too, was captured on a cellphone video.

Thursday's shootings occurred in area of hotels, restaurants, businesses and some residential apartments only a few blocks from Dealey Plaza, where President John F. Kennedy was assassinated.

The scene was chaotic, with officers with automatic rifles on the street corners.

"Everyone just started running," Devante Odom, 21, told The Dallas Morning News. "We lost touch with two of our friends just trying to get out of there."

Carlos Harris, who lives downtown, told the newspaper that the shooters "were strategic. It was tap, tap pause. Tap, tap pause," he said.

Brown said police don't have a motivation for the attacks or any information on the suspects. He said they "triangulated" in the downtown area where the protesters were marching and had "some knowledge of the route" they would take.

Video posted on social media appeared to show a gunman at ground level exchanging fire with a police officer who was then felled.

Authorities have not determined whether any protesters were involved with or were complicit in the attack and were not certain early Friday that all suspects have been located, Brown said.

Rawlings said at the news conference that authorities will likely ask some people to stay away from downtown Dallas on Friday. Rawlings said a map would be posted online showing an area where people should avoid on Friday.

Early Friday morning, there were dozens of officers of the corridor of the ER at Baylor Medical Center, where other injured officers were taken. The mayor and police chief were seen arriving there.

Four of the officers who were killed were with the Dallas Police Department, a spokesman said. One was a Dallas Area Rapid Transit officer. The agency said in a statement that 43-year-old officer Brent Thompson was the first officer killed in the line of duty since the agency formed a police department in 1989.

"Our hearts are broken," the statement said.

Theresa Williams told The Associated Press that the injured civilian was her sister, 37-year-old Shetamia Taylor.

Williams said her sister was at the protests Thursday night with her four sons, ages 12 to 17.

When the shooting began, Taylor threw herself over her sons, Williams said. She was undergoing surgery early Friday after being shot in the right calf.

Texas Gov. Greg Abbott released a statement saying he has directed the Texas Department of Public Safety director to offer "whatever assistance the City of Dallas needs at this time."

"In times like this we must remember — and emphasize — the importance of uniting as Americans," Abbott said.

Other protests across the U.S. on Thursday were peaceful. In midtown Manhattan, protesters first gathered in Union Square Park where they chanted "The people united, never be divided!" and "What do we want? Justice. When do we want it? Now!" In Minnesota, where Castile was shot, hundreds of protesters marched in the rain from a vigil to the governor's official residence. Protesters also marched in Atlanta, Chicago and Philadelphia.

President Barack Obama said America is "horrified" over the shootings and there's no possible justification for the attacks.

Speaking from Warsaw, Poland, where he was meeting with leaders of the European Union and attending a NATO summit, the president said justice will be done and he's asking all Americans to pray for the fallen officers and their families. He also said the nation should express its gratitude to those serving in law enforcement.

Police Killed Per Capita | Graphiq
Copyright 2016 The Associated Press. All rights reserved. This material may not be published, broadcast, rewritten or redistributed.