Time Warner Center in NYC evacuated due to device

Federal authorities are investigating suspicious packages addressed to the home of Bill and Hillary Clinton in New York, the Obamas' home in Washington, D.C., and CNN in New York.

Federal authorities are investigating suspicious packages addressed to the home of Bill and Hillary Clinton in New York, the Obamas' home in Washington, D.C. and the White House.

RECOMMENDED: CNN office in New York one of many to receive explosive device package this week

Early Wednesday morning, a second package addressed to the residence of Former President Barack Obama was intercepted by the U.S. Secret Service in Washington, DC.

The packages were both found during routine mail screening procedures and identified as potential explosive devices. They did not reach Clinton or Obama.

There were reports that a third similar package addressed to the White House was intercepted Wednesday morning, but the U.S. Secret Service has since denied those reports.

CLARIFICATION: At this time the Secret Service has intercepted TWO suspicious packages - one in NY and one in D.C. Reports of a third intercepted package addressed to the WH are incorrect. We refer media to our statement: https://t.co/lJdTn04KmI

The Time Warner Center in New York City, home to CNN's bureau in NYC, was evacuated Wednesday after a suspicious device similar to those sent to the Clintons and Obamas was found. The package was found in the building's mailroom.

There are reports that all three devices are of similar pipe-bomb-style construction.

A suspicious device was sent to the office of Congresswoman Debbie Wasserman Schultz in Sunrise, Florida. Sources have confirmed to ABC News that Schultz's name appeared in the return address of at least one of the packages sent on Wednesday. Authorities do not believe she has any connection to the sender.

The Secret Service is conducting a criminal investigation along with federal and state officials to find the person or persons responsible. 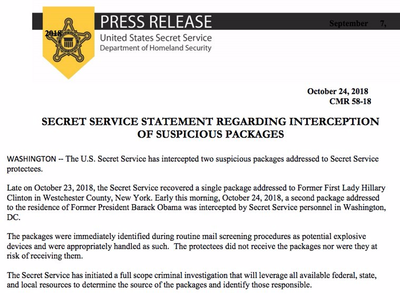 President Trump has been briefed on the suspicious packages sent to the Clinton and Obama homes and the White House has issued a statement forcefully condemning the "attempted violent attacks."

“We condemn the attempted violent attacks recently made against President Obama, President Clinton, Secretary Clinton, and other public figures," Sarah Sanders says in a statement. "These terrorizing acts are despicable, and anyone responsible will be held accountable to the fullest extent of the law. The United States Secret Service and other law enforcement agencies are investigating and will take all appropriate actions to protect anyone threatened by these cowards.”

Earlier this week, a suspicious package targeting billionaire investor and major Democratic donor George Soros was discovered and rendered safe. Authorities are investigating whether there are any connections between the packages.