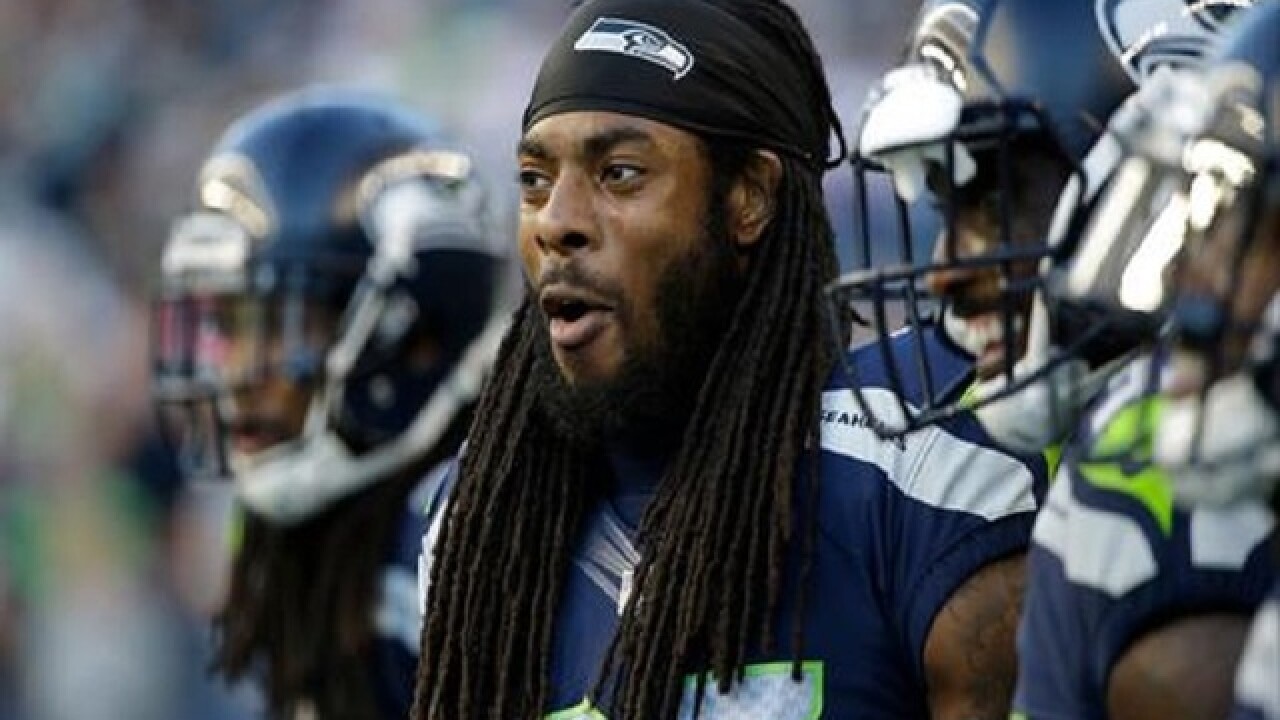 Elaine Thompson
<p>FILE - In this Aug. 18, 2016, file photo, Seattle Seahawks cornerback Richard Sherman stands on the sideline before a preseason NFL football game against the Minnesota Vikings in Seattle. Sherman has been an All-Pro player three times in his five-year career. (AP Photo/Elaine Thompson, File)</p>

RENTON, Wash. (AP) — Seattle Seahawks cornerback Richard Sherman said Wednesday the public isn't listening to the message NFL players are trying to send with their actions during the national anthem.
While some fans are obsessing about whether players take a knee, raise a fist or lock arms during the national anthem before games, Sherman said they should be talking about the reasons why players are protesting.
"More videos have come out of guys getting killed, and I think people are still missing the point," Sherman said. "The reason these guys are kneeling, the reason we're locking arms is to bring people together to make people aware that this is not right. It's not right for people to get killed in the street."
Sherman did not take questions during his media availability. Instead, he walked to the podium, said a few words about this week's opponent San Francisco and then gave a two-minute statement about what players have wanted to accomplish.
Sherman's message came after a pair of police shootings this week, one in Charlotte, North Carolina, another in Tulsa, Oklahoma.
"I do a lot of community service. I go out there and try to help kids and try to encourage them to be better and to aspire to more," he said. "And when you tell a kid, 'When you're dealing with police, just put your hands up and comply with everything,' and there's still a chance of them getting shot and no repercussions for anyone, that's an unfortunate time to be living. That's an unfortunate place to be in."
Sherman's statement came as the Seahawks are preparing to face San Francisco on Sunday. Teammate Doug Baldwin told reporters in the Bay Area that members of the Seahawks have had extensive conversations with Colin Kaepernick, who started the conversation with his decision to first sit and then kneel during the national anthem.
"It's not just the NFL landscape. It's across the country right now," Baldwin said. "Obviously, we wouldn't be having this conversation if it wasn't for him bringing it to light. He stood on the table and shouted and got everybody's attention. And now we have to work on the follow through collectively."
While Kapenerick and other players have chosen to kneel or raise fists during the anthem, the Seahawks have stood with coaches and players interlocking arms for the first two weeks of the season. Seattle defensive back Jeremy Lane sat during the final preseason game in Oakland but has stood with his teammates the past two weeks.
"When a guy takes a knee, you can ignore it. You can say he's not being patriotic, he's not honoring the flag," Sherman said. "I'm doing none of those things. I'm saying it straight up. This is wrong and we need to do something."
Copyright 2016 The Associated Press. All rights reserved. This material may not be published, broadcast, rewritten or redistributed.