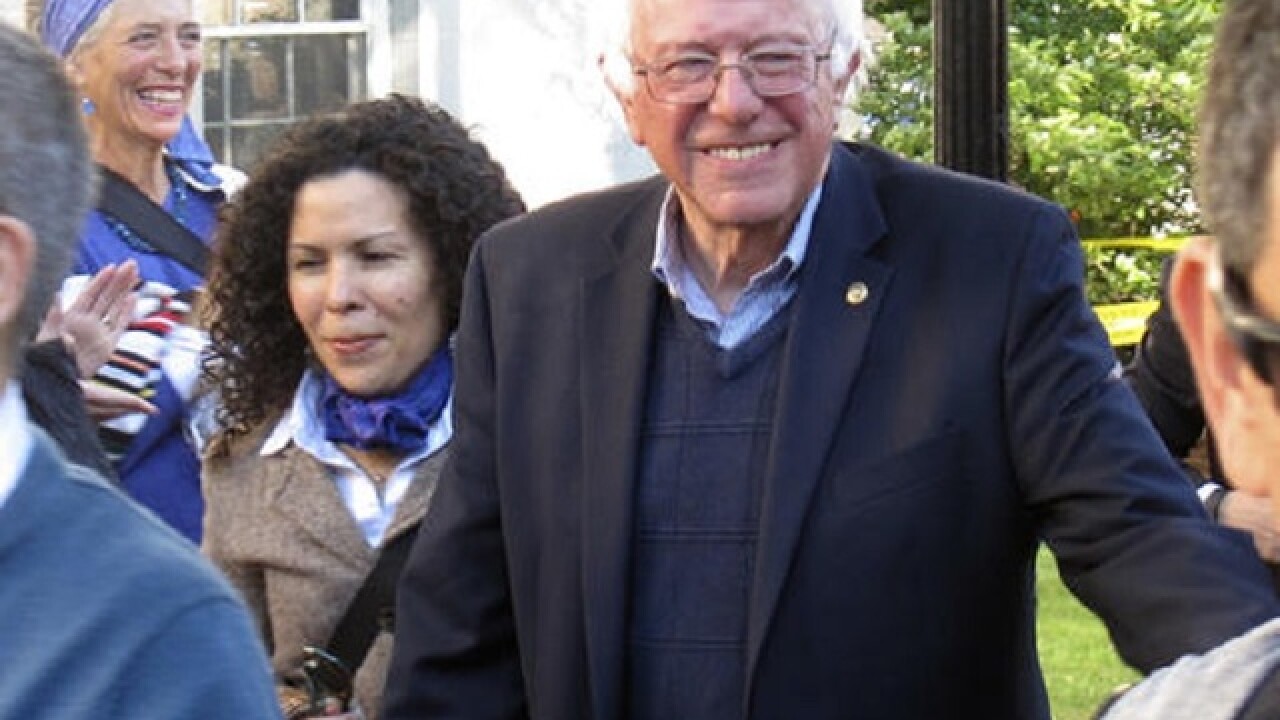 By: Associated Press
Posted at 9:56 PM, Jun 13, 2016
WASHINGTON (AP) — Bernie Sanders is expected to spend his final primary night meeting with Democratic rival Hillary Clinton — not before thousands of cheering supporters — as his campaign seeks to influence Clinton's agenda against Republican Donald Trump.
Sanders plans to meet privately with Clinton in Washington on Tuesday evening as the District of Columbia holds the last primary of the Democratic race. The Vermont senator suggested in media interviews Sunday that an endorsement will not come immediately, saying he hopes to learn more about the kind of platform she will support.
"Dependent on how Secretary Clinton comes down on many of these major issues will determine how closely we can work with her," he said on CBS' "Face the Nation."
Clinton is now the presumptive Democratic nominee and Sanders has shown signs of winding down his campaign. He met last week with President Barack Obama and Vice President Joe Biden, who both later endorsed Clinton, and held a Washington rally that included chants of "Thank you, Bernie."
After spending a long weekend in Vermont, Sanders attended a vigil in his hometown Monday to show solidarity with the victims of the mass shooting at a nightclub in Orlando.
Sanders said the Orlando shooting was carried out by "one hateful person" and was not committed by the Muslim people. To claim otherwise, he said, "is bigotry pure and simple."
"Our job is not to allow politicians, Mr. Trump or anyone else, to divide us up by where our family came from, the color of our skin, our religion or our sexual orientation," Sanders said.
Sanders will meet Tuesday with Senate Democrats during their weekly luncheon, following up on meetings last week with Senate Democratic leader Harry Reid of Nevada and Sen. Chuck Schumer of New York, the party's incoming Senate leader.
Sanders has pledged to do everything he can to defeat Trump but it remains unclear what shape his campaign will take after Tuesday. He told reporters Sunday after meeting with supporters that he intends to take his campaign to the Philadelphia convention with an awareness of "who has received the most votes up to now."
"He hopes to have a good discussion with (Clinton). After that we'll think some more about the next steps of the campaign, but he has made it clear that the campaign will go to the Democratic National Convention in Philadelphia where the issues that he fought for will be discussed," said Sanders spokesman Michael Briggs.
Looking forward, Sanders has begun helping Democrats preparing for congressional races and the battle to regain control of the Senate.
An early test of his clout will come Tuesday in Nevada, where a Sanders-backed congressional candidate, Lucy Flores, competes in a three-way primary.
Sanders has opened up his campaign's massive email donor list to several Democratic candidates, hauling in more than $2.4 million for his allies. Flores has been the top recipient of those appeals, collecting about $390,000 from an email Sanders sent in April on behalf of her and two other candidates.
Copyright 2016 The Associated Press. All rights reserved. This material may not be published, broadcast, rewritten or redistributed.