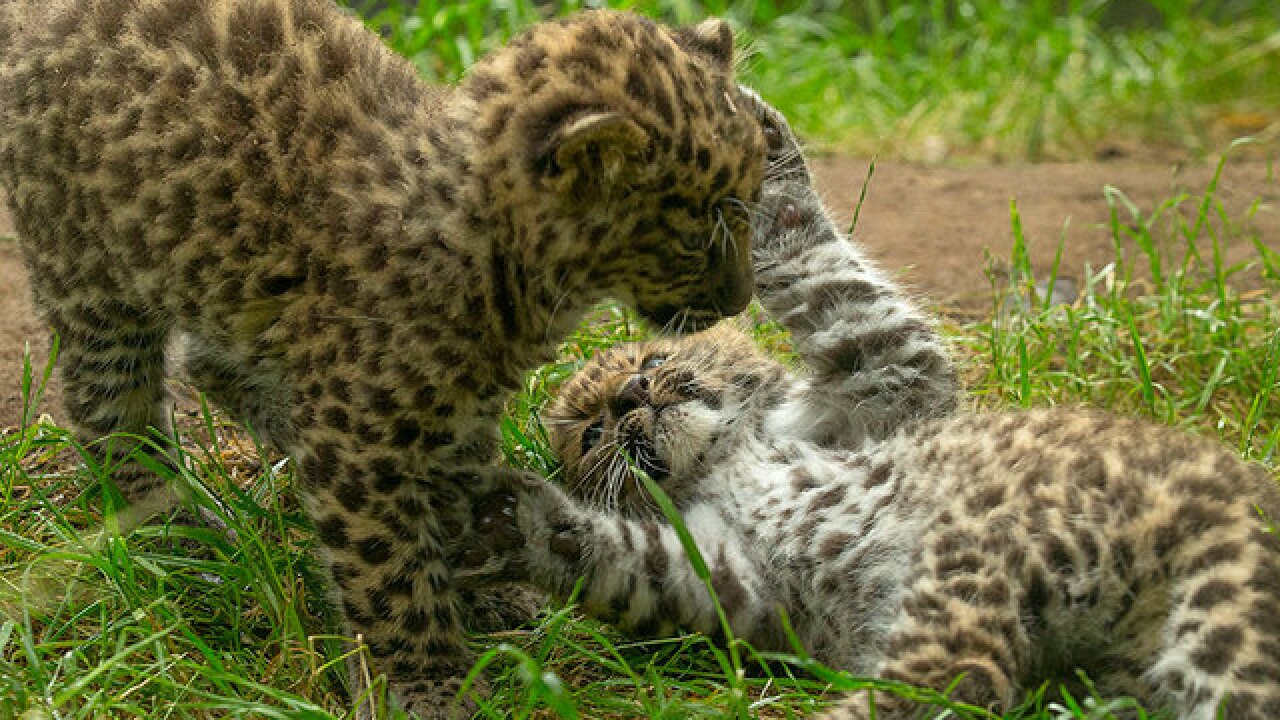 Copyright 2018 Scripps Media, Inc. All rights reserved. This material may not be published, broadcast, rewritten, or redistributed.
TAMMY SPRATT, SAN DIEGO ZOO GLOBAL
<p>Two adorable Amur leopard cubs played in their habitat at the San Diego Zoo this morning, under the watchful eye of their mom, 4-year-old Satka, animal care staff, zoo guests. The cubs, born April 5th, are the first Amur leopard cubs born at the Zoo since the rare species first arrived in 2011. Over the past few weeks, Satka has been introducing the young ones to their habitat, slowly allowing them to explore, climb and play, before corralling them into the den for feedings or to rest.</p>

According to the zoo, this is the first time Amur leopard cubs have been born at the Zoo since the rare species first arrived in 2011.

The mother, 4-year-old Satka, has been keeping a watchful eye on the cubs since their birth on April 5. Over the past few weeks, she has been introducing the young ones to their habitat, slowly allowing them to explore, climb and play, before corralling them into the den for feedings or to rest. Animal care staff said that so far, they haven’t had much contact with the cubs. Instead, their objective is to allow Satka to take the lead in their care.

"Our strategy for managing these cubs is to remain very hands off and let their mother continue to do the great job she’s been doing,” said Todd Speis, senior mammal keeper at the San Diego Zoo. “As the cubs get older, we will begin to build a relationship with them. But the highest priority right now is the relationship they have with each other and with their mother.”

For the past seven years, the animal care staff has worked to gain management experience with this species, transporting cats from Europe to North America for approved breeding as part of the Global Species Management Program (GSMP)—an international conservation effort in which scientists work to increase regional animal populations. Less than 70 Amur leopards have been documented in their native habitat, the Primorye region of the Russian Far East, making them the rarest big cat species on the planet. These mostly solitary animals were once found in northeastern China, Russia and the Korean peninsula, but those populations have been decimated, due to loss of habitat and poaching for their thick, spotted coats.

San Diego Zoo Global and other zoological organizations around the world have joined together with the hope of conserving this species. More than 94 institutions, caring for over 220 leopards, take part in the GSMP, which also supports field conservation efforts to protect the remaining animals. The hope is that the population will slowly grow in numbers, specifically in the trans-border region of Russia and China. In conjunction with habitat preservation and restoration efforts, the breeding program in zoos is designed to support the sustainability of the Amur species by building a baseline population, which will then produce offspring that could help bolster the dwindling population in the wild.

Animal care staff will perform a health check on the cubs within the coming days—including determining their gender. San Diego Zoo guests can visit Satka and her cubs at their home in the Asian Cats habitat found in Panda Canyon.