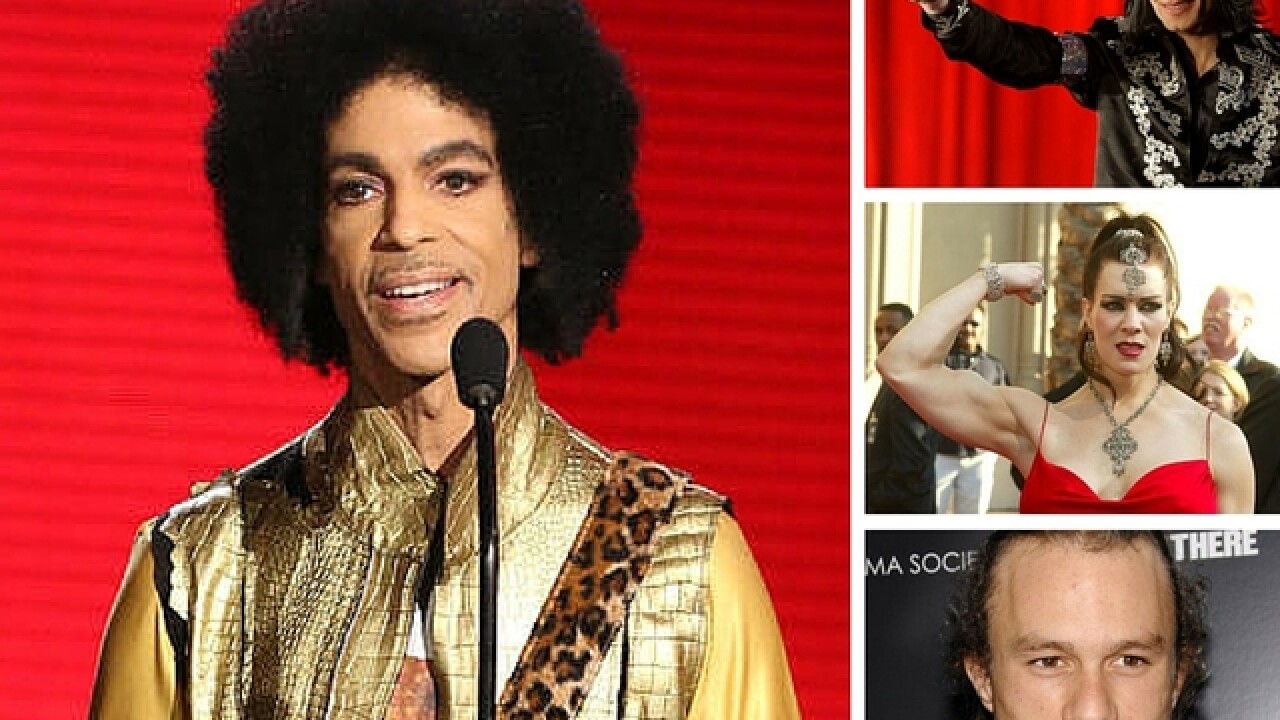 LOS ANGELES (AP) — A Minnesota medical examiner said Thursday that Prince died of an accidental overdose of fentanyl, a synthetic opioid painkiller. Authorities have not said whether he had a prescription for the drug and, if not, how he obtained it.

Prince joins a list of other stars, including Judy Garland and Marilyn Monroe, whose lives ended with an overdose.

Bennett had a patch containing fentanyl on his back when he died in May 2009. He had recently written on his MySpace page that he was getting ready for hip replacement surgery.

He had worked as a sound engineer and played instruments for Wilco from 1994 to 2001. He sued Wilco frontman Jeff Tweedy before he died, claiming he was owed royalties for songs during his seven years with the group.

— CHYNA: Joanie Laurer, a former wrestling star known as Chyna, died in April of a suspected drug overdose. Manager Anthony Anzaldo says she accidentally overdosed on a prescription sleeping pill and a tranquilizer.

Laurer had prescriptions for Ambien and a generic version of Valium. No alcohol was found in her system.

Chyna was pro wrestling's first female superstar. She fought both men and women in the ring. She was billed as the "9th Wonder of the World," a nod to Andre the Giant's self-designation as the eighth.

— MARGAUX HEMINGWAY: Actress and model Margaux Hemingway was found dead in her apartment in 1996. Investigators determined it was a suicide from an overdose of phenobarbital, a sedative used to treat epilepsy and other conditions.

As a model, Hemingway appeared on the covers of Elle, Cosmopolitan and Vogue. Her film credits include 1979's "Killer Fish" and 1984's "Over the Brooklyn Bridge."

— MICHAEL JACKSON: Michael Jackson died in 2009 of "acute propofol intoxication." The King of Pop had been taking the prescription anesthetic to sleep as he prepared for a series of comeback concerts.

Former cardiologist Conrad Murray was convicted in 2011 of giving Jackson a fatal dose of the drug. He served two years in in jail for causing Jackson's 2009 death. Murray's conviction was upheld in 2014.

— HEATH LEDGER: Oscar-nominated for "Brokeback Mountain" and a posthumous winner for "The Dark Knight," Heath Ledger died in 2008 from an accidental overdose of six different drugs.

Among the medications in his system were oxycodone, hydrocodone, diazepam, temazepam, alprazolam and doxylamine. There was no mention of alcohol or illegal drugs.

"Heath's accidental death serves as a caution to the hidden dangers of combining prescription medication, even at low dosage," his father said.

Three of the six prescription drugs found in Ledger's apartment had been filled in Europe.

Contributing factors included her weakened condition from stomach flu and an infection on her buttocks.

Police say the death was probably not a suicide because people who die by suicide typically use more lethal drugs than chloral hydrate.

Broward County Medical Examiner Dr. Joshua Perper said Smith also had been on several antidepressant and anti-anxiety drugs and had recently been injecting herself with purported longevity medications, vitamin B-12 and growth hormone.