Pope to bring his message to world leaders at UN 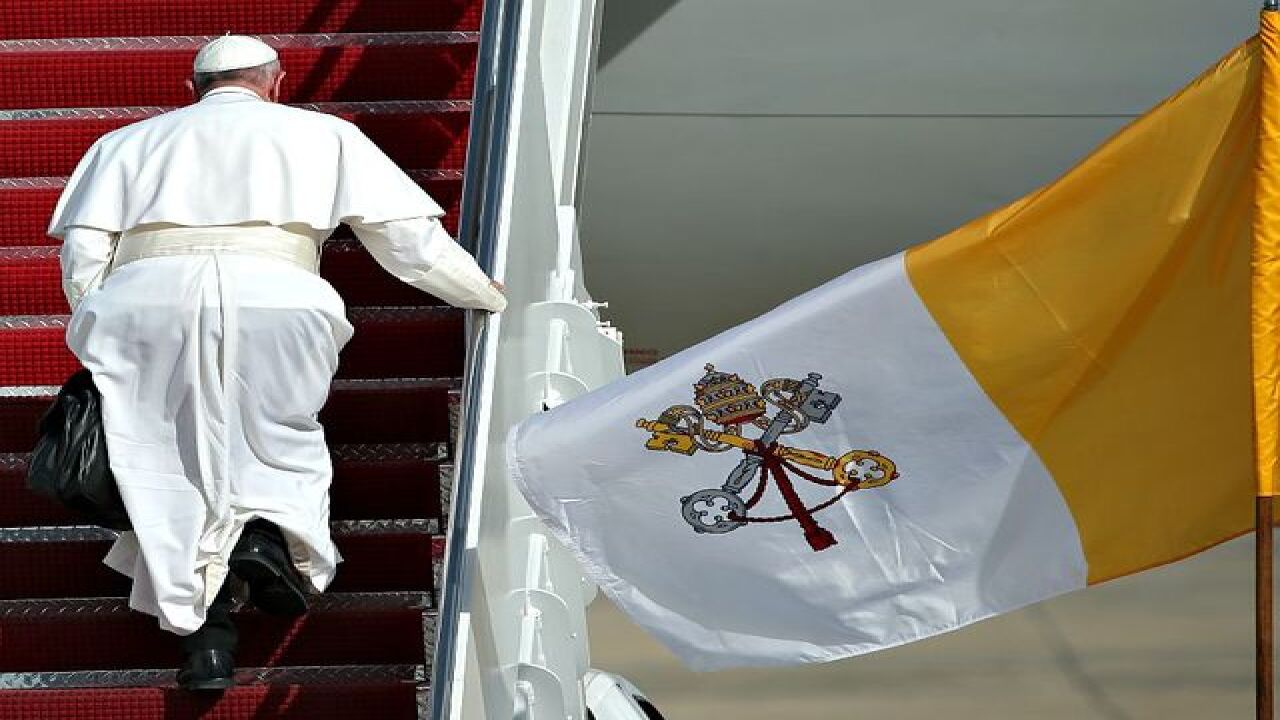 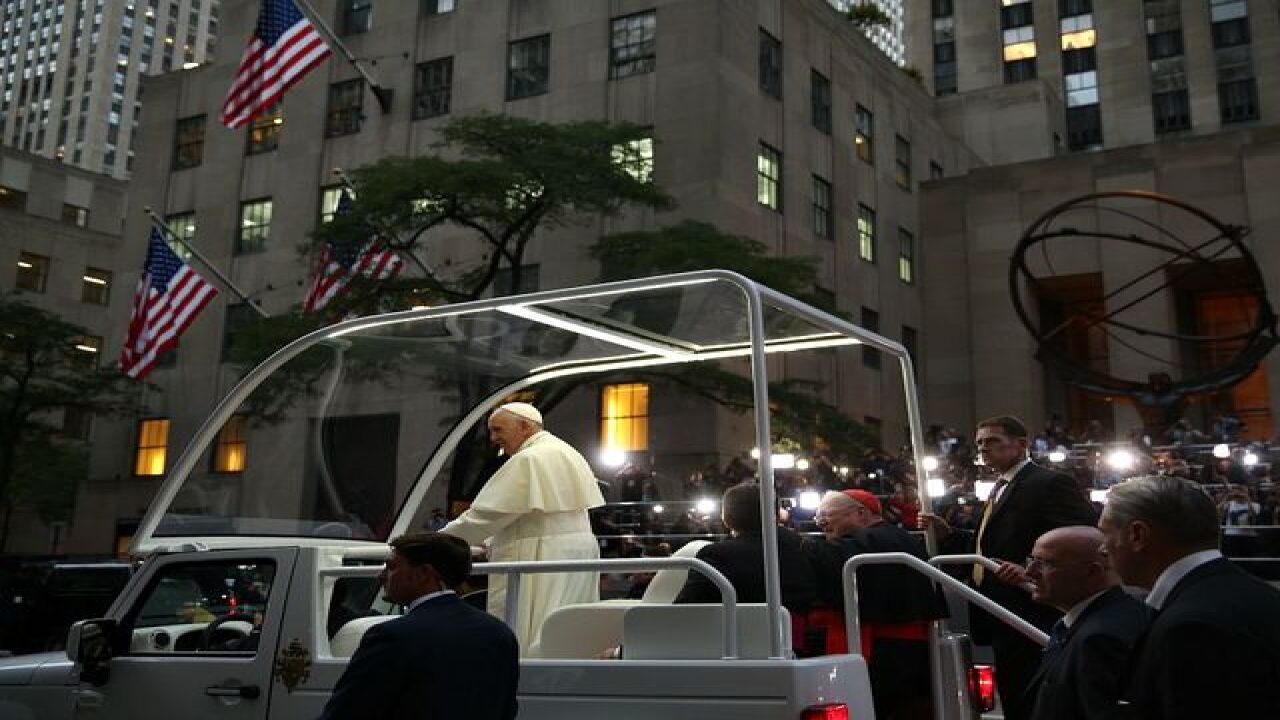 From the world stage of the United Nations to an inner-city school, Pope Francis is emphasizing themes that have shaped his popular papacy as he packs in encounters with the powerful and the poor in New York City.

His agenda for Friday reflects both his global stature and his of-the-people approach, while taking him from the solemnity of ground zero to the struggles of East Harlem. It includes events as large as a processional drive through Central Park, as personal as meeting schoolchildren and immigrants, and as inspiring for the faithful as Mass for thousands in the Madison Square Garden arena.

Francis, who on Thursday became the first pope to address a joint session of the U.S. Congress, is now set to speak to world leaders gathered for a U.N. General Assembly summit to adopt new global goals to fight poverty and preserve the environment.

The Vatican has said Francis is expected to discuss the need for peace, the plight of refugees and the role of poverty and bad government in driving conflict and migration. But inequality, poverty, the environment and religious persecution may also be among the issues he highlights for the international audience.

Francis has exhorted wealthy countries to "open doors" to migrants seeking better lives, a message that resounded in Thursday's speech to a rapt Congress. He also touched on the conflicts that have sparked the greatest refugee crisis since World War II and, in some places, have spurred killings of Christians and other religious minorities by Islamic extremists. The pontiff has expressed deep concern about those killings, but he cautioned in his speech to Congress that the world must be thoughtful about how it responds to extremism.

Francis is also scheduled to confer with U.N. Secretary-General Ban Ki-moon on Friday and meet with U.N. officials and staffers.

While his visit marks the fifth time a pope has been to the United Nations, the Vatican's gold-and-white flag will be raised for the first time just before his arrival. The General Assembly recently agreed to allow the U.N.'s two observer states, the Holy See and Palestine, to fly their flags alongside those of the 193 member states.

The pope will head next to the 9/11 memorial, where two waterfall pools mark the outlines of the World Trade Center's twin towers before they were felled by the terrorist attacks of Sept. 11, 2001. He's expected to meet relatives of some of the nearly 3,000 victims before heading belowground to the National Sept. 11 Museum for an interfaith service.

Francis' plans for Friday afternoon reflect the penchant of the "people's pope" for engaging with the public, on scales large and small.

First comes a visit to Our Lady Queen of Angels School, set amid public housing in the heavily Hispanic neighborhood of East Harlem.

Known for ministering to the downtrodden in his native Buenos Aires, Francis will meet schoolchildren and offer a special blessing to refugees and immigrants, including people living in the country illegally.

Then he'll greet as many as 80,000 onlookers as he drives through Central Park, en route to Mass for 18,000 at Madison Square Garden.

On Thursday evening, thousands cheered as Francis waved from his popemobile along Fifth Avenue en route to St. Patrick's Cathedral for evening prayers.

His reflections included his strongest expression yet of gratitude and respect for American nuns, whom he thanked for their strength, spirit and courage. Pews full of U.S. priests and sisters erupted in applause on hearing Francis' words, which came after he halted an overhaul the Vatican had ordered under his predecessor to the largest umbrella group of U.S. sisters. The Vatican office that guards orthodoxy had accused the nuns of straying from church teaching, which they denied.

In Washington earlier Thursday, the pope waded into bitter disputes while speaking to Congress, entreating the nation to share its immense wealth with those less fortunate. Before a House chamber packed with Supreme Court justices, Cabinet officials, lawmakers and Vice President Joe Biden, he urged Congress and the nation to abolish the death penalty, fight global warming and embrace immigrants.

Lawmakers gave rousing ovations despite obvious disagreements over some of his pleas. Though he offered an agenda more to Democrats' liking, Republicans heard something to applaud in his references to the sanctity of life and family relations, reminders that even the more open Roman Catholic Church over which Francis presides still condemns abortion and gay marriage.

His historic speech appeared determined to remind the United States of its foundations as a country made up of foreigners, addressing the chamber and the American people in personal terms as a son of immigrants to "this great continent."

"Let us treat others with the same passion and compassion with which we want to be treated," he said. "Let us seek for others the same possibilities which we seek for ourselves."

Later, he underscored his message by traveling to a downtown Washington church, where he mingled with needy and homeless people, blessed their noontime meal and walked among them while they ate.

Francis wraps up his U.S. visit this weekend in Philadelphia, where he speaks in front of Independence Hall and celebrates Mass on the Benjamin Franklin Parkway to close out a big Catholic families rally.