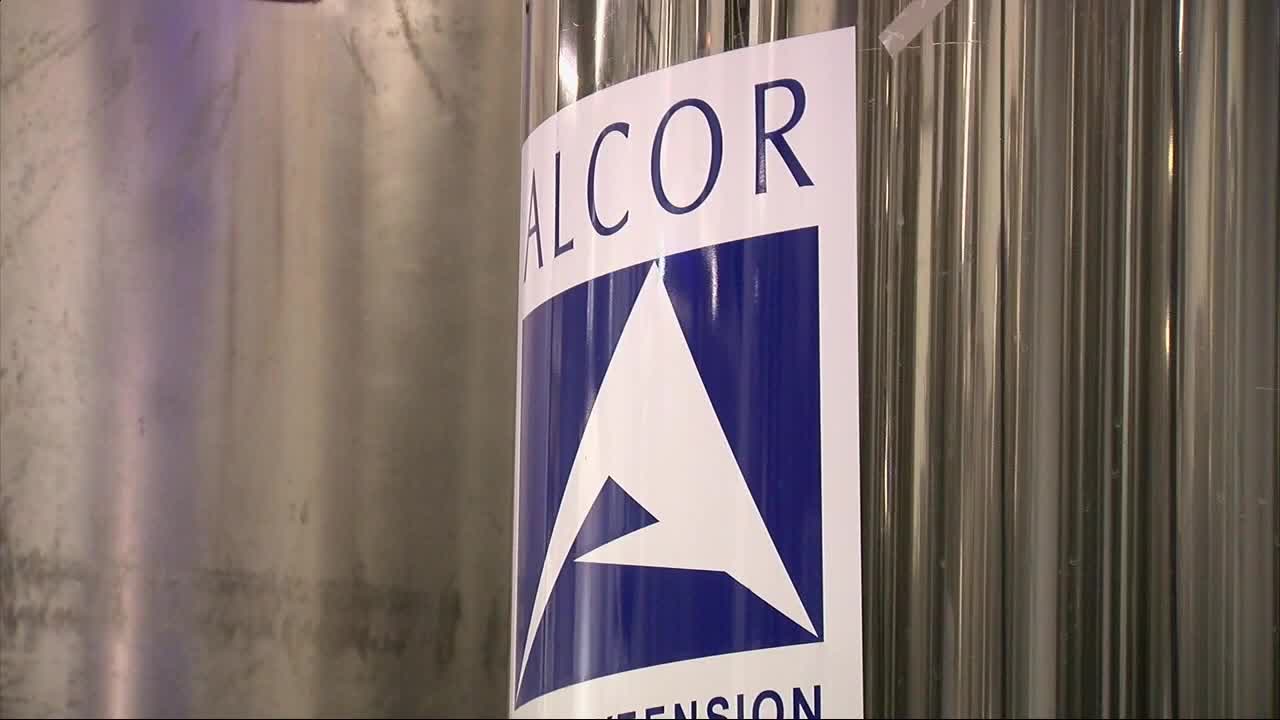 It may sound unorthodox, but the practice of cryogenically preserving, or freezing a body after legal death, is slowly gaining traction around the world. The Scottsdale based Alcor Life Extension Foundation now has 186 humans and 86 animals cryopreserved inside its facility. 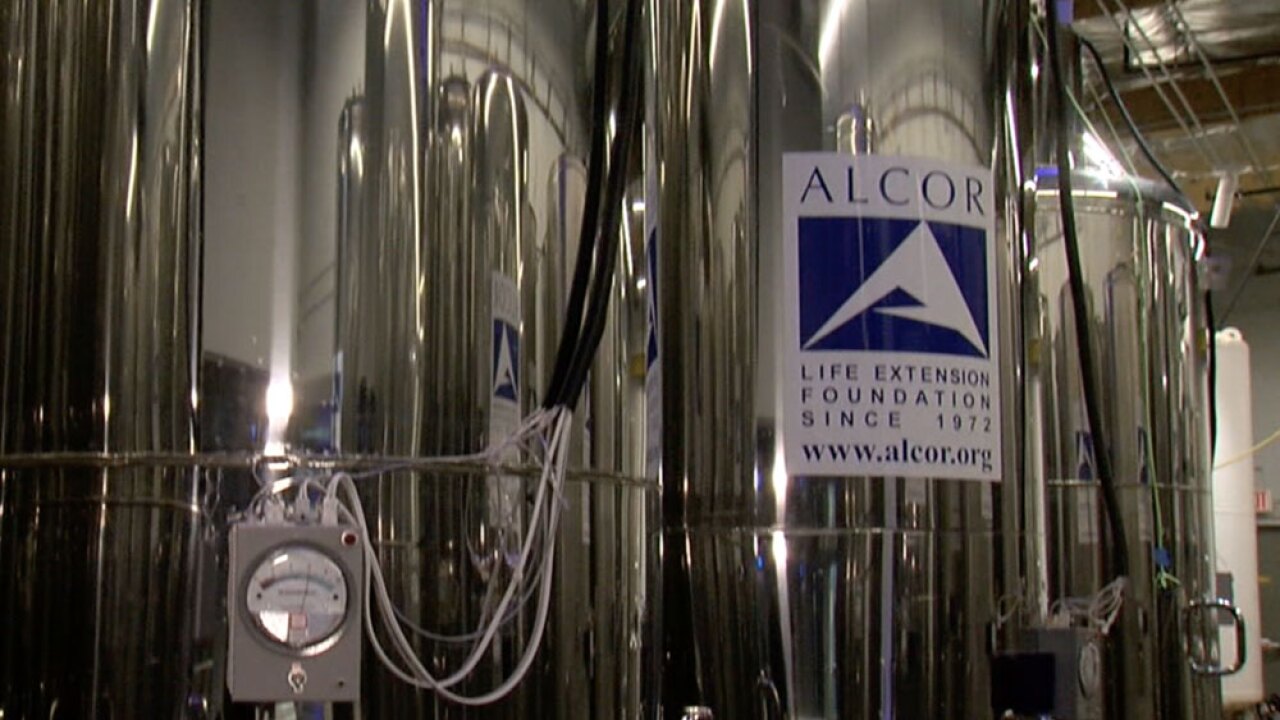 SCOTTSDALE, AZ — It may sound unorthodox, but the practice of cryogenically preserving, or freezing a body after legal death, is slowly gaining traction around the world. The Scottsdale based Alcor Life Extension Foundation now has 186 humans and 86 animals cryopreserved inside its facility.

The practice of preserving a pet is open to Alcor members only, and Alcor CEO Dr. Max More said they had seen a big increase in the number of pets being preserved in their facility.

"If you love an animal, why not have it come back with you in the future, assuming that this will work," said More.

While unconventional, More said many people chose to dedicate their bodies for scientific research instead of being buried in a casket or cremated with their ashes preserved in an urn.

More said if you considered all the science and medical technology advancements that have been made so far, it is not entirely unreasonable to think that someday, it could be possible to bring back a cryogenically preserved person.

"The idea of Cryonics is if you can protect the cells take the body down to super cold temperatures of minus 320 degrees Fahrenheit, that will stop everything and it buys us decades or even centuries for science to catch up to the point where we can fix whatever it was that stopped you functioning, and even reverse the aging process," said More.

He added that the definition of what is considered "legally dead" today has already changed.

"If you go back to 1960 (and) if your heart stopped beating and you stopped breathing then we just said you're dead and that was it. Today we say this person will die if we don't do something quickly. So we've got to resuscitate quickly or do CPR and defibrillation. So what's interesting is in 1960 what was dead then, we don't consider dead today. What we're saying is when we say someone is dead today, all that means is the doctor is throwing up his hands and saying there's nothing more I can do based on the skills and technology today, but that will change in the future," said More.

More also pointed out scientists were now cryopreserving all kinds of tissues in labs, such as skin, corneas, eggs, and sperm and they were able to revive those.

The facility and ideas have received some criticism and skepticism by medical professionals who have gone as far as to call the ideas "baloney." Scripps station ABC15 in Phoenix reached out to several neurologists and doctors but were unable to find one willing to go on camera to comment about the practice of Cryology.

ABC15 asked Dr. More what he would say to those who considered their ideas "hogwash."

"Well, I would say they need to look into it more. We expect technology to keep advancing just as life spans have now gone from (an) average of 40 something to mid 70's or 80's, we think that's going to keep extending as we keep getting better and better biological repair methods," said More.

Preserving a whole body cost about $200,000. Dr. More said about half their members had chosen just to preserve their brains. They called them "neuro" patients.

ABC15 asked More if Alcor members had encountered criticism from those who found the practice to be unethical.

"Well what do you think is the ethical problem? People spend vast amounts of money trying to stay alive at the end of their lives. For even a few more days, weeks or months in absolute misery, and that can cost a lot more than what we charge for this," said More.

He explained that most of their members used life insurance policies to pay for the cryopreservation.

"You just make Alcor the legal beneficiary, that pays out soon after legal death," said More.

During a tour of the facility, More pointed out pictures of cryopreserved members and animals lining their walls. He explained that most of their members were scientists, researchers, mathematicians and computer programmers. He pointed out a science fiction writer from China and a 3-year-old girl from Thailand who suffered from brain cancer.

Most of the Alcor members cryopreserved in Scottsdale are from the United States and Europe.

More said they did not consider their patient's dead, they considered them in an in-between state or "de-animated".

The majority of the 86 animals cryopreserved in the facility were dogs and cats, but they also included a turtle, a chinchilla and a Rhesus monkey.

More himself had his beloved Goldendoodle Oscar preserved in the facility. He called Oscar the first dog he had ever loved.

"He was just a fantastic dog, he was the most friendly loving dog you can imagine," said More.

ABC15 asked More what he would say to critics who felt you could save a lot of animals in shelters with $200,000.

"They are free to do that with their money. If they can stop buying expensive shoes and handbags, and going on flights to vacations, I'm assuming they do that. Are they also going to hospitals and telling people not to have cancer treatment and heart surgery?" said More.

ABC15 asked More if the company was simply selling those afraid of death a form of hope.

"This is not supernatural hope. This is not something that has no foundation. This is the same thing we're doing to Cryopreserve organs and tissues," said More, but he stressed they did tell all members this was not guaranteed.

"We make it very clear that we're not guaranteeing anything. We don't know if this is going to work for sure, we don't know if the organization will survive, there is all kinds of ifs and buts," said More.

"I really do believe at some point in the future this will be the normal thing. We'll look back on the present and scratch our heads and why did we throw our loved ones in the ground or in gigantic ovens when we could have given them a chance to come back?" he added.

The Scottsdale facility has 12 paid staff members, dozens of volunteers and 7 members on a board of directors who are not paid. They contract with cryopreservation friendly surgeons in the community to help them with the actual process of preservation.