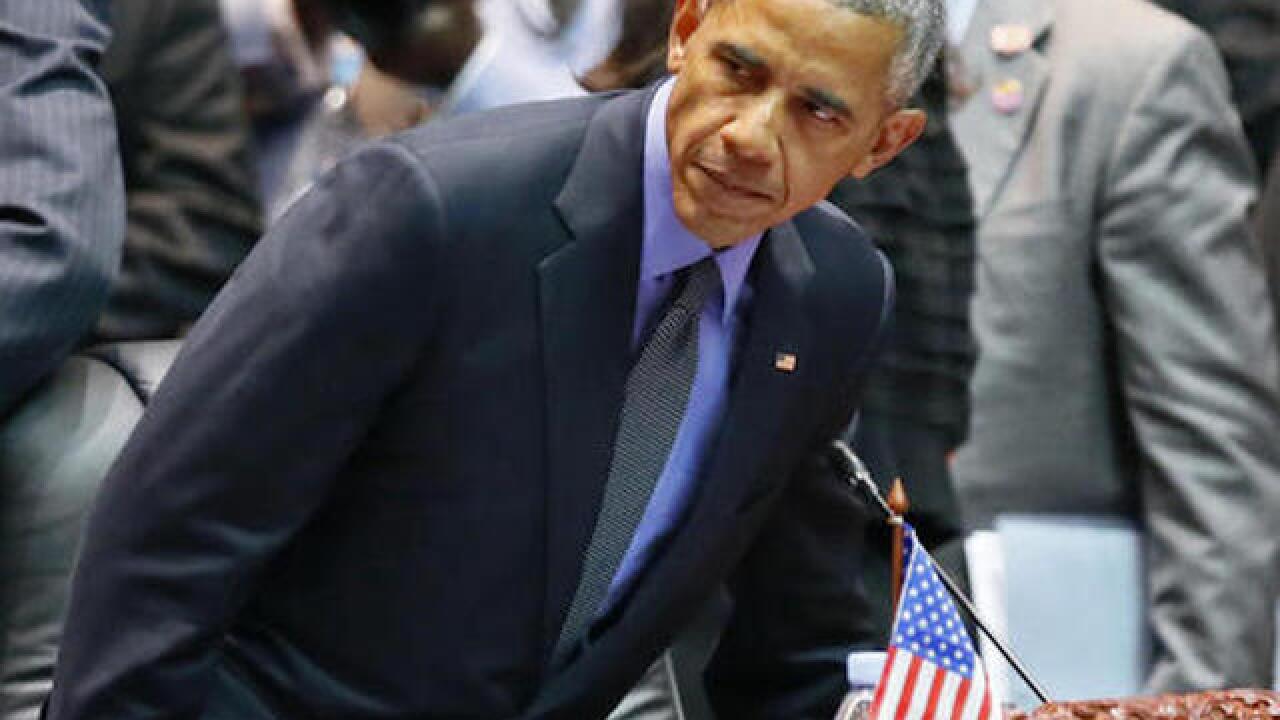 Copyright Associated Press
Bullit Marquez
<p>U.S. President Barack Obama takes his seat at the start of the 11th East Asia Summit on the last day of the 28th and 29th ASEAN Summits and other related summits at the National Convention Center Thursday, Sept. 8, 2016 in Vientiane, Laos.(AP Photo/Bullit Marquez)</p>

VIENTIANE, Laos (AP) — President Barack Obama said Thursday that Republican Donald Trump confirms his belief that Trump isn't qualified to be president "every time he speaks," adding that he was confident Americans would ultimately reject the brash billionaire on Election Day.

Obama, closing out his final presidential trip to Asia, said his meetings with foreign leaders during the trip had illustrated that governing is "serious business" requiring knowledge, preparation and thought-out policies that can actually be implemented. He urged Americans not to allow the "outrageous behavior" seen amid the campaign-season din to become the new normal.

"The most important thing for the public and the press is to just listen to what he says and follow up and ask questions to what appear to be either contradictory or uninformed or outright whacky ideas," Obama said.

Throughout the campaign, Obama has repeatedly denounced Trump and deemed him "unfit" to serve as commander in chief, while arguing that his controversial positions and comments are a step beyond what Republican nominees have embraced in the past. Obama has endorsed Hillary Clinton and has said he plans to campaign full-force for the Democrat ahead of the November election.

Obama's remarks came at the end of a grueling nine-day trip that took the him to Laos and China following U.S. stops in Nevada, Hawaii and Midway Atoll in the Pacific Ocean. Obama said that the United States and Southeast Asian nations gathered in Laos have advanced a vision of an open, dynamic and competitive economic system in which all nations play by the same rules.

"When I think back to the time I spent here as a boy, I can't help but be struck by the extraordinary progress that's been made by the region in the decades since, even if there's still a lot of work to be done," Obama said.

At the top of that list is the Trans-Pacific Partnership, a 12-nation free trade deal Obama helped broker. That deal awaits ratification in the U.S. Congress, where there is opposition from both parties, but Obama said he planned to do everything possible to persuade lawmakers to approve it before year's end.

The president pointed to discussions with Southeast Asian leaders about maritime disputes in the South China Sea and suggested progress had been made in clarifying the path ahead to lower tensions between China and the Philippines. In a joint statement issued by leaders of the Association of Southeast Asian Nations, members were expected to issue a mild rebuke to China without referencing it by name.

"I realize this raises tensions," Obama said earlier as he met with ASEAN leader, referring to a recent international arbitration ruling against China on the maritime dispute. "But I also look forward to discussing how we can constructively move forward together to lower tensions and promote diplomacy and regional stability."

On his last day in Asia, Obama met with Indian Prime Minister Narendra Modi, whose help Obama is seeking to galvanize further action on climate change, especially among developing countries. The two grinned and shook hands but made no substantive comments as reporters were allowed in briefly for the start of their meeting.

Obama's final stop in Laos included an informal conversation with Philippine President Rodrigo Duterte on the sidelines of a summit. Obama had canceled a formal meeting with Duterte after the new Philippine leader used a crude schoolyard epithet to insult the president and warn him not to bring up extrajudicial killings in the Philippines during their meeting.