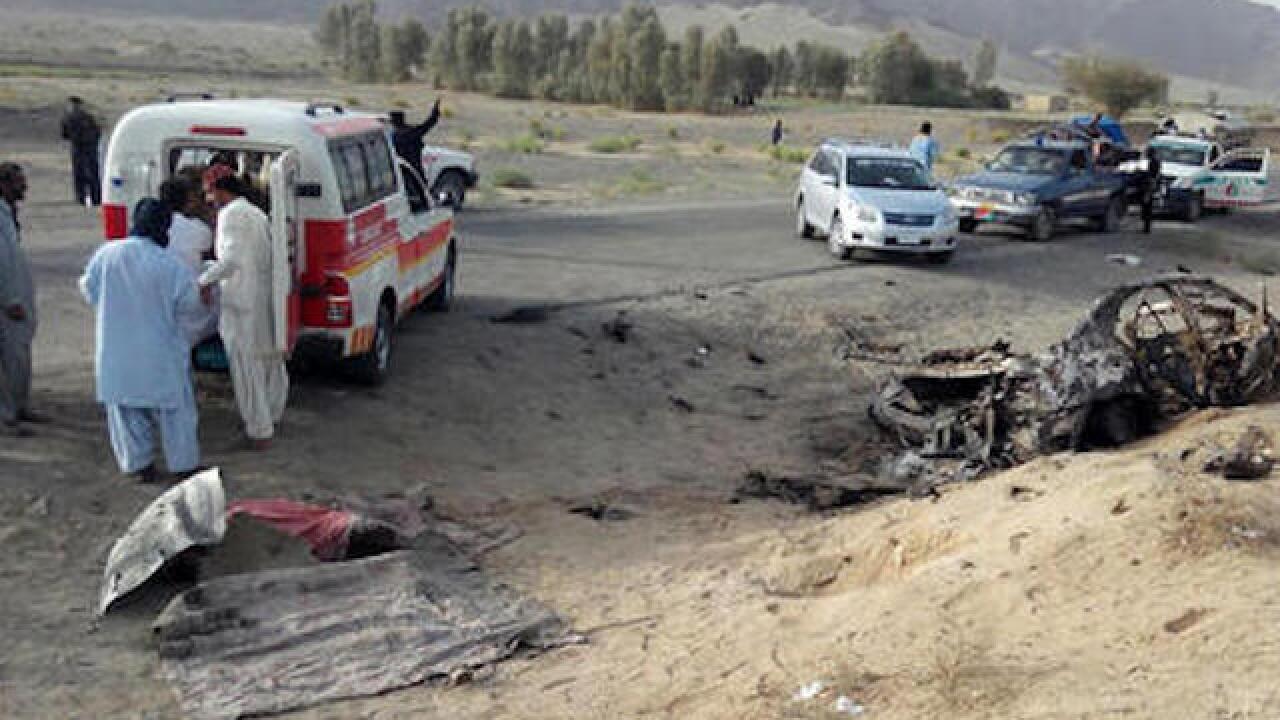 Copyright Associated Press
Abdul Malik
<p>This photo taken by a freelance photographer Abdul Malik on Saturday, May 21, 2016, purports to show people are volunteers stand near a wreckage of the destroyed vehicle, in which Mullah Mohammad Akhtar Mansour was traveling in the Ahmed Wal area in Baluchistan province of Pakistan, near Afghanistan border. A senior commander of the Afghan Taliban confirmed on Sunday that the extremest group's leader, Mullah Mohammad Akhtar Mansour, has been killed in a U.S. drone strike. (AP Photo/Abdul Malik)</p>

Obama also said Mansour's death was an "important milestone" in the yearslong effort to bring peace to Afghanistan.

"It has been confirmed that he is dead," Obama said Monday during his first visit to Vietnam. "He is an individual who, as head of the Taliban, was specifically targeting U.S. personnel and troops inside of Afghanistan" who Obama sent there to help counter terrorism and help train Afghan troops.

Mansour was killed when a U.S. drone fired on his vehicle in the southwestern Pakistan province of Baluchistan, though it was unclear whether the airstrike took place on Friday or Saturday. He had emerged as the successor to Taliban founder Mullah Mohammad Omar, whose 2013 death was only revealed last year.

Obama authorized the attack and was briefed before and after it was carried out, aides said.

Speaking at a news conference following his meeting with Vietnamese President Tran Dai Quang, Obama said the fatal attack on Mansour did not represent a change in U.S. military strategy in Afghanistan, which is to help train Afghan forces. Obama ended the U.S. combat mission in Afghanistan in 2014.

"We are not re-entering the day-to-day combat operations that are currently being conducted by Afghan security forces," Obama said. "Our job is to help Afghanistan secure its own country, not to have our men and women in uniform engage in that fight for them."

"On the other hand, where we have a high-profile leader who has been consistently part of plans and operations to potentially harm U.S. personnel and who has been resistant to the kinds of peace talks and reconciliation that ultimately could bring an end to decades of war in Afghanistan, then it is my responsibility as commander in chief not to stand by, but to make sure that we send a clear signal to the Taliban and others that we're going to protect our people.

"And that's exactly the message that has been sent," Obama said.

Mansour was chosen to head the Afghan Taliban last summer after the revelation of Omar's death in 2013. The Taliban is the most powerful insurgent group in the war-ravaged country, where an estimated 11,000 civilians were killed or wounded and 5,500 government troops and police officers died last year alone.

The Taliban seized power in 1996 and ruled Afghanistan according to a harsh interpretation of Islamic law until the group was toppled by a U.S.-led invasion following the Sept. 11, 2001, attacks on New York and Washington.

Almost 15 years later, about 13,000 troops are in the country from a U.S.-NATO coalition, including around 9,800 Americans. While they are mostly focused on training and helping Afghan government forces battle the insurgency, about 3,000 troops are conducting counterterrorism operations against the Taliban and the extremist groups al-Qaida and the Islamic State.

In a written statement issued before the news conference, Obama said Mansour's death marked an "important milestone in our longstanding effort to bring peace and prosperity to Afghanistan." Obama said Mansour had rejected Afghan government efforts to engage in peace talks with the Taliban with the goal of ending violence that has killed thousands. He called on the organization to choose the path toward peace.

"The Taliban should seize the opportunity to pursue the only real path for ending this long conflict - joining the Afghan government in a reconciliation process that leads to lasting peace and stability," Obama said.