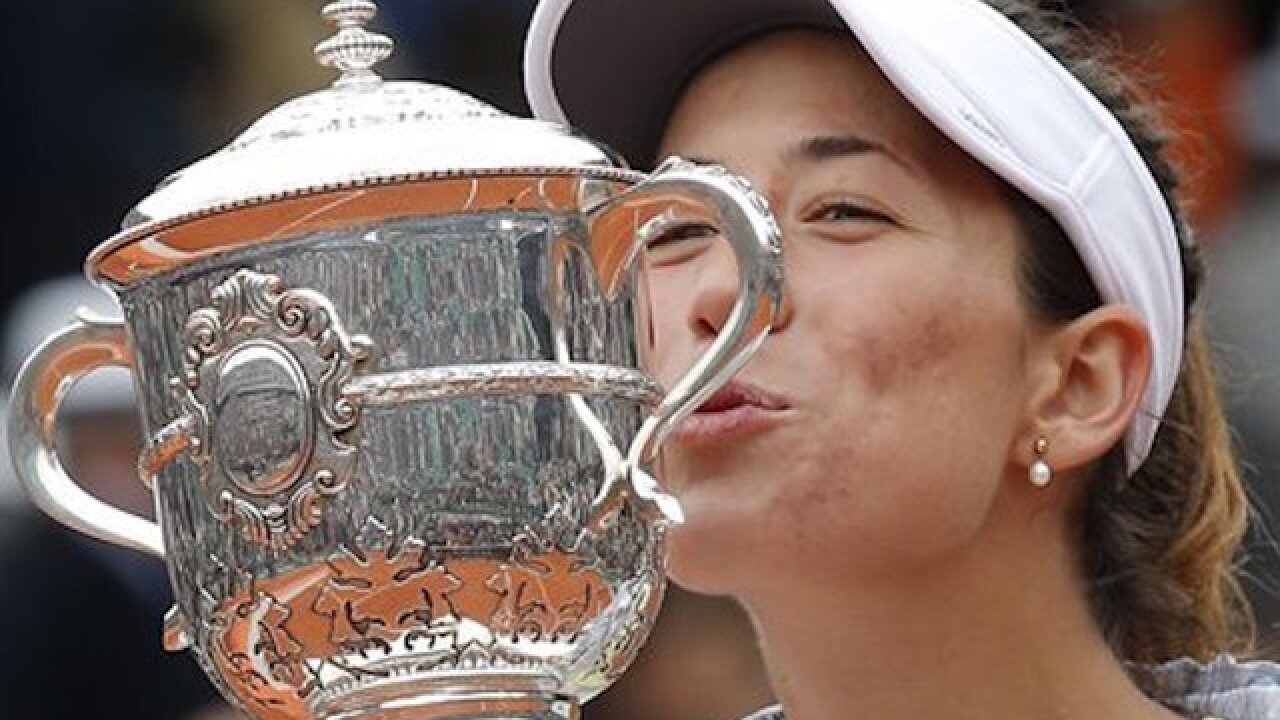 PARIS (AP) — The day before the French Open final, Serena Williams' coach, Patrick Mouratoglou, was discussing whether his player would need to lift her level to beat Garbine Muguruza and collect a record-equaling 22nd Grand Slam title.

"I don't know why everybody's so impressed with Garbine," Mouratoglou said. "Did she win a Slam ever?"

His comment, accompanied by a chuckle, was intended in a lighthearted way. About 24 hours later, his question required a new answer.

Muguruza won her first major trophy and prevented Williams yet again from collecting No. 22, outplaying the defending champion in a 7-5, 6-4 victory at Roland Garros on Saturday.

"She has a bright future, obviously," said Williams, who at 34 is 12 years older than her Spanish opponent. "She knows how to play on the big stage and ... clearly, she knows how to win Grand Slams."

The fourth-seeded Muguruza used her big groundstrokes to keep No. 1 Williams off-balance and overcame signs of nerves in the form of nine double-faults. Most impressively, Muguruza broke Williams four times, including three in a row.

"I can't explain with words what this day means to me," Muguruza said.

This was her second major final; she lost to Williams at Wimbledon last year. But Muguruza has won her past two matches against Williams on the clay of Roland Garros, including in the second round in 2014. So dating to the start of the 2013 French Open, Williams is 0-2 in Paris against Muguruza, 21-0 against everyone else.

"I have grown up playing on clay," Muguruza said during the trophy ceremony, "so for Spain, and for me, this is amazing."

For Williams, whose timing was not exactly right much of the afternoon, Saturday's loss postponed her pursuit of Steffi Graf's Open-era mark of 22 major singles championships. Margaret Court holds the all-time record of 24.

Williams got No. 21 at Wimbledon in 2015, her fourth major title in a row. Since, she was beaten in the U.S. Open semifinals by Roberta Vinci, in the Australian Open final by Angelique Kerber, and now by Muguruza. It's the first time in Williams' career she lost back-to-back Slam finals.

Mouratoglou said Saturday that chasing a 22nd major "isn't an obsession" for Williams.

"She doesn't wake up every morning thinking about it. That's for sure." But he added: "The pressure of leaving an indelible mark on history is incomparable."

Williams credited Muguruza with playing "unbelievable," adding: "The only thing I can do is just keep trying."

This year's visit to Paris hardly could have started off more inauspiciously for Muguruza: She lost the first set she played, against 38th-ranked Anna Karolina Schmiedlova.

But, oh, how Muguruza turned things around. She won her next 14 sets, displaying take-the-ball-early aggressiveness.

The final began under a slate ceiling of clouds, but at least there was none of the heavy rain that led to flooding in Paris and a temporary shutdown of the Louvre museum. The showers jumbled the tournament schedule, and Williams was in action a fourth straight day in the final.

She did not blame that or a problem with a leg muscle.

"I don't think it's like something that I would say: 'Oh, that was the reason,'" Williams said.

Muguruza won the coin toss and let Williams serve first, a fascinating choice given the American's prowess with that part of the game. And the decision seemed only more dubious as Muguruza put the ball on play on only one of the first six points Williams served.

And yet, it all wound up working out. And how.

Muguruza won all six points of 10 shots or more in the first set and, indeed, there was no junkballing on this day. Both women hit hard, trading bold forehands and backhands from the baseline that made it seem unfair to characterize nearly anything as an "unforced error."

After a run of breaks gave Muguruza the first set and a lead in the second, Williams never recovered. She did, however, cast aside a quartet of match points for Muguruza at 5-3. There was nothing Williams could do about the fifth, which Muguruza converted with a delightful lob that landed right on the baseline.

Williams applauded. Maybe stunned by that shot, maybe stunned that she was now a Grand Slam champion, Muguruza turned toward her coach and other supporters in the stands with a blank expression. Soon, she was flat on her back, caking her dress and arms with the rust-colored clay she will never forget.