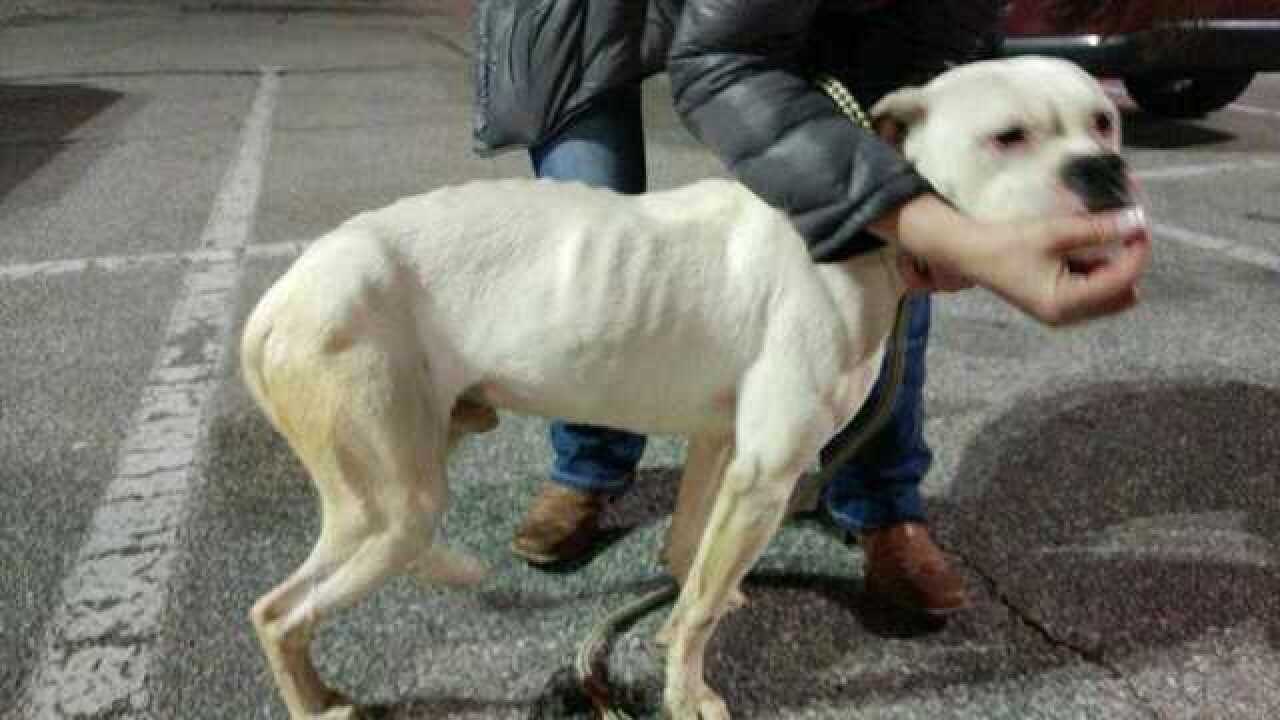 Copyright 2018 Scripps Media, Inc. All rights reserved. This material may not be published, broadcast, rewritten, or redistributed.
<p>Picture of one of the malnourished dogs. </p>

GLEN BURNIE, Maryland — Two kennel owners are facing dozens of charges after several dogs were found neglected in their care, and one of them had to be put down.

On March 20, Anne Arundel County Police say they got a complaint about Olympian Kennels, a company that was supposed to be training and caring for dogs. Some of the dog owners were concerned after they could not reach the kennel's owners, Rebecca Wolfe or Cameron Whitaker-Nelson.

In addition to not being able to reach the owners, there were concerns raised after Wolfe posted a message on social media saying Animal Control had taken all of the animals in her care and custody, but Animal Control had not done that.

After an investigation, police found six dogs in the basement of Wolfe and Whitaker-Nelson's home on Shade Drive in Glen Burnie. Two of the dogs were severely weak and sick.

The basement where the dogs were kept smelled of ammonia and fecal matter. One of the two sick dogs was having trouble breathing and had to be put down shortly after going to the animal hospital.

The five other dogs were returned to their owners following a checkup from a veterinarian.

The adventures of Maizie Rai with her human best friend Fiona Dawson are well documented on social media, their story is now intertwined with this house.

Dawson's story lines up with numerous other's who have reached out about neglect at this home.

The couple used to work for Jessica breeding at Premier Dog Training and Boarding.

Wolfe worked the front desk and Whitaker-Nelson was a trainer, Breeding said she trusted them initially.

Putting dogs into trainers homes to acclimate is how most dogs complete their training.

Breeding got suspicious when a service dog in training named King died in the couples care and the couple refused to get a necropsy done.

"After two weeks we were asking her for the results she wouldn't’t give them to us,” said Breeding.  “I ended up calling the vet and they said no necropsy was ever done. It was a battle to try to get the body from the vet for me to actually get a necropsy done. We found out that the dog had passed because of negligent circumstances.”

Around that time Dawson started to get worried about Maizie Rai.

ABC2 got emails that show an agreement with the couple Dawson met through Premier Dog Training.

Dawson had to travel a lot for much for work, so the couple would take in Maizie

Dawson would pay for her food, medicine, and give the couple $100 a month.

Wolfe and Nelson would take care of Maizie long term and Dawson could set up visits.

“I picked her up and she seemed to be doing great,” said Dawson. “She was socializing with other dogs which was quite unusual for her because she had such anxiety when she was with me. I really kind of felt like she was having a better life with them then she was with me."

That was the last time Watson saw Maizie Rai.

She said for two months the pictures were replaced by excuses and then nothing.

“Throughout all this time never in my mind did I think that she wouldn’t be alive,” Dawson said.

Dawson and Breeding went to the house to figure out what was going on, no one answered.

Anne Arundel County Police and Animal Control joined them,that's when the couple finally came out of the house.

“I say "Hi Cameron here for Maizie Rai". In front of the police and animal control.  Cameron looks me in the eye and says "Fiona we texted you a couple of months ago not sure if you got it or not but Maizie Rai died". I just lost it, and screamed and cried almost hyperventilated.  We then sat back and watched animal control take dogs out of their house.”

Dawson has no idea where Maizie Rai's body is.

The investigation is still ongoing and can result in additional charges. Anyone with information is asked to contact Animal Control Officer Wolfe at 410-222-3929 (no relation to suspect Rebecca Wolfe).

We were able to reach Whitaker-Nelson on the phone, he said he had no comment and that he didn't know what was going on.

Wolfe and Whitaker-Nelson have each been charged with 40 counts of animal cruelty.