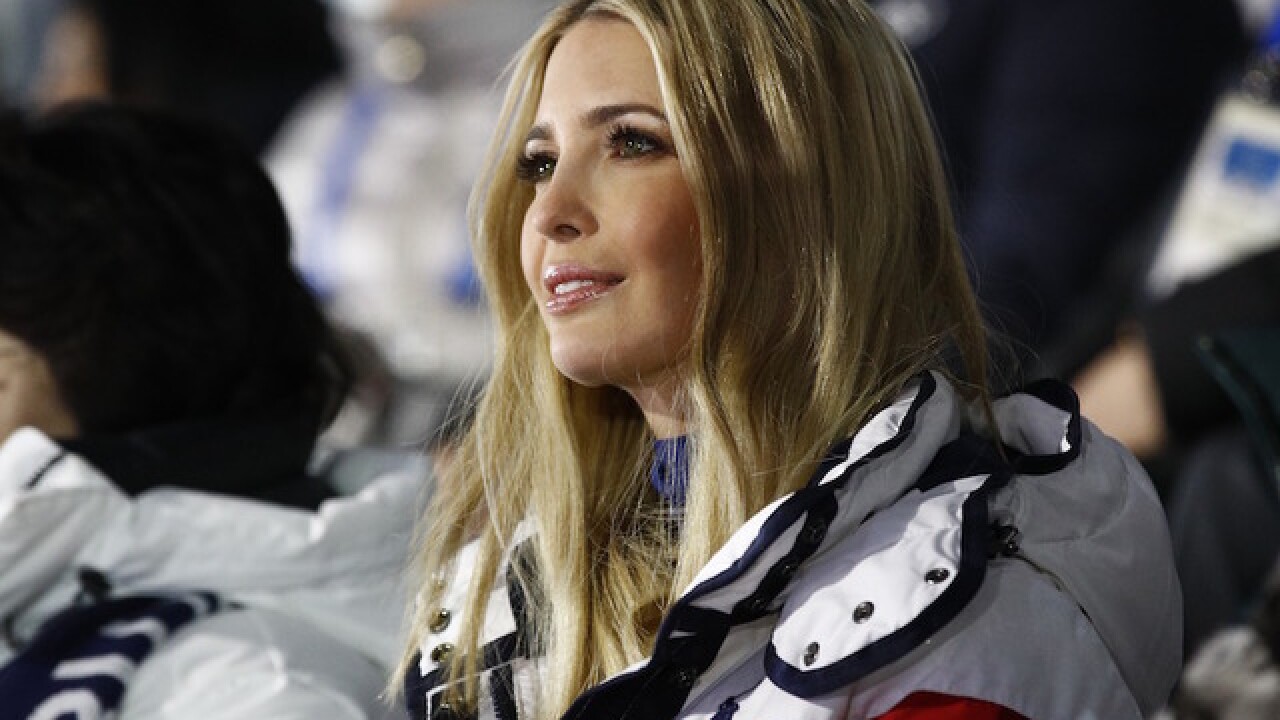 She's a policy adviser bearing sensitive new details on sanctions to the South Koreans. She's a loyal family member who won't entertain questions about her father's purported infidelities. And she's a US figurehead bearing goodwill at an international sporting event.

But inside the White House, Ivanka Trump's unique stature -- along with that of her husband, Jared Kushner -- is causing tension. Some of their colleagues chafe at the pair's favorable standing, and the boss, chief of staff John Kelly, has worked to instill a military-style hierarchy to the West Wing.

Just as Kushner's struggles to obtain a permanent security clearance have highlighted his unusual position in the administration, Ivanka Trump's visit this week to South Korea -- her highest-profile solo trip yet -- underscored the unavoidable conflict she juggles. Not since she temporarily filled her father's seat at the G20 summit last year in Germany -- stirring external criticism -- has she taken such a high-profile assignment.

The decision to send her to South Korea did not sit well with some senior officials in the West Wing, two people familiar with the situation told CNN. The nuclear threat from North Korea and the tensions already boiling across the Korean Peninsula made any US delegation far more than ceremonial.

Kelly was not initially enthusiastic about her South Korea trip, a person close to President Donald Trump said, largely because the visit to the Korean Peninsula was far more than a typical Olympic closing ceremony.

'The stakes are far higher and more complex'

"This isn't like going to Italy. The stakes are far higher and more complex," a person close to the President said, speaking on condition of anonymity to discuss the sensitive subject of the Trump family.

The concerns of Kelly and others about Ms. Trump — who has little experience in government or diplomacy, and hasn't played a role in discussions about North Korea — were aired in private, according to people familiar with the matter. Kelly was advised by those closest to him that it would be a losing battle to oppose Ivanka as the delegation's leader.

White House officials disputed the notion of any tension surrounding Ivanka Trump's trip, saying it had been in the works for several weeks. They said Ms. Trump was not in negotiations with the South Koreans, rather stating administration policy.

"General Kelly and General McMaster were supportive of the trip since the planning process began," White House press secretary Sarah Sanders told CNN Monday night. "We all thought it was a great success. Ivanka was a great representative for the administration."

The blurred line between staffer and daughter has long irked Kelly, according to people familiar with the matter, who say his regimented sense of order is tested by the implicit access being a child of the President affords. When he assumed his West Wing role in late July, Kushner and Ms. Trump were initially supportive. The White House went to lengths to insist they would report to Kelly, rather than directly to the President. And over the summer and fall, both were said to admire Kelly and the order he brought to the White House.

Over the past weeks, however, Trump's chief of staff has found himself repeatedly caught between his role as the West Wing's top manager and as the person charged with carrying out the President's will - which, in many cases, means doing what Trump's family wants.

That includes handling the matter of Kushner's security clearance, which is in a state of limbo after Kelly mandated that all aides still working on interim clearances lose access to classified material. The deadline was Friday, but as of Monday, it remained unclear whether Kushner or Ms. Trump had formally been stripped of their interim clearances -- or granted a waiver.

On Friday, Trump told reporters at a news conference that it would be Kelly's decision - and not his - whether Kushner could continue accessing the country's secrets.

"He's going to do what's right for the country," Trump said, looking toward his chief of staff, who was seated nearby. "And I have no doubt he'll make the right decision."

It was evident to most top aides gathered in the East Room what he meant. Trump went to lengths to praise Kushner's work on Middle East peace and made sure to note he wasn't drawing a salary - with the implication that his volunteerism should be rewarded with access to the nation's top secrets.

Meanwhile, Kelly has grown increasingly frustrated with Ivanka Trump since he entered the West Wing last July, people familiar with the situation say. He often feels that she tries to have it both ways, acting as a senior adviser to the president when it suits her and then as his daughter when it doesn't. Kelly has remarked privately that Ivanka is just "playing government," one source said, and has largely brushed aside her agenda, once disregarding her child tax credit as "a pet project."

Another source familiar with the President's thinking says Ivanka's influence on his decision making has been exaggerated. He generally doesn't heed her advice when it comes to serious policy debates, as he didn't when he made the decision to withdraw from the Paris climate accord. But she is looked at in the West Wing as one of few people who can soothe the President when he is indignant or angry.

Some staffers have used Ivanka's clout as daughter and adviser to their advantage. She was sent on the road last fall -- often to suburban areas -- to sell her father's tax reform plan. Trump praised her work on the tax issue during a news conference on Friday.

"She was very much involved, as you know, in the child tax credit, and now she's working very much on family leave, things that I don't think would've been in the agreement if it weren't for Ivanka and some of our great senators," Trump said. "But she was very much in the forefront of that."

Though Ivanka interacts with most White House staff only in a limited manner, there is a healthy amount of resentment toward her in the West Wing, whether it's about the blurring of the lines of her apparel company or the feeling of officials who believe they are more experienced and better suited to handle the high-profile roles she often assumes.

The Olympics episode led to questions about whether she was traveling to Pyeongchang as a senior adviser or as the first daughter, a distinction that several administration officials and people close to the White House say has softened as Trump's administration enters its second year.

Ahead of her trip to South Korea, top White House aides went to lengths to insist that Ms. Trump was leading the delegation as an administration official, not as a member of Trump's family.

In her role as the delegation's leader, Ms. Trump oversaw a US senator, the White House press secretary, the de facto ambassador in Seoul and several members of the US military. She spoke on the delegation's behalf when the group arrived in South Korea, and was the honored guest for dinner at the presidential Blue House in Seoul. The menu for the event included "Korean food designed to be palatable for foreigners," with "Grilled soft tofu with special marinade for Ivanka Trump" and "Kalbi grilled ribs for everyone else," according to a menu released by the South Koreans.

It became clear even as Ivanka Trump and her delegation were arriving in South Korea that her visit would be about more than just winter sports. During talks with South Korean President Moon Jae-in, Ms. Trump provided information abut a new round of economic sanctions against North Korea and "discussed the continued effort on the joint maximum pressure campaign against North Korea," according to a senior administration official.

"Ivanka Trump has been briefed on this. She's been part of the team," Treasury Secretary Steven Mnuchin said at the White House on Friday. "She had dinner with President Moon. They had a private discussion in advance about this occurring."

Pressed about her security clearance, which like her husband's remains in temporary status, Mnuchin snapped: "Yeah, she has the appropriate access to brief President Moon."

Role as a daughter

Despite the trip's official nature, when Ms. Trump was questioned about accusations of sexual misconduct against the President it was her role as his daughter that she leaned on.

"I think it's a pretty inappropriate question to ask a daughter, if she believes the accusers of her father, when he's affirmatively stated that there's no truth to it," she told NBC News, the US broadcaster of the Olympic Games. "I don't think that's a question you would ask many other daughters."

Leading a US Olympic delegation is a role often assigned to the first lady. Laura Bush attended the 2006 Games in Italy and Michelle Obama traveled to the 2012 Games in London.

There is no modern day precedent for Ivanka's role, which still makes for awkward moments for the White House. A senior administration official told reporters on a briefing call last week: "Mrs. Trump delivered a personal message to President Moon from President Trump about today's North Korea related sanctions announcement at a small meeting at the Blue House."

Repeatedly, the official described the trip "Mrs. Trump" was taking.

Apparently lost on the official and others in the White House is the fact that Mrs. Trump is technically the first lady, who stayed back in Washington.