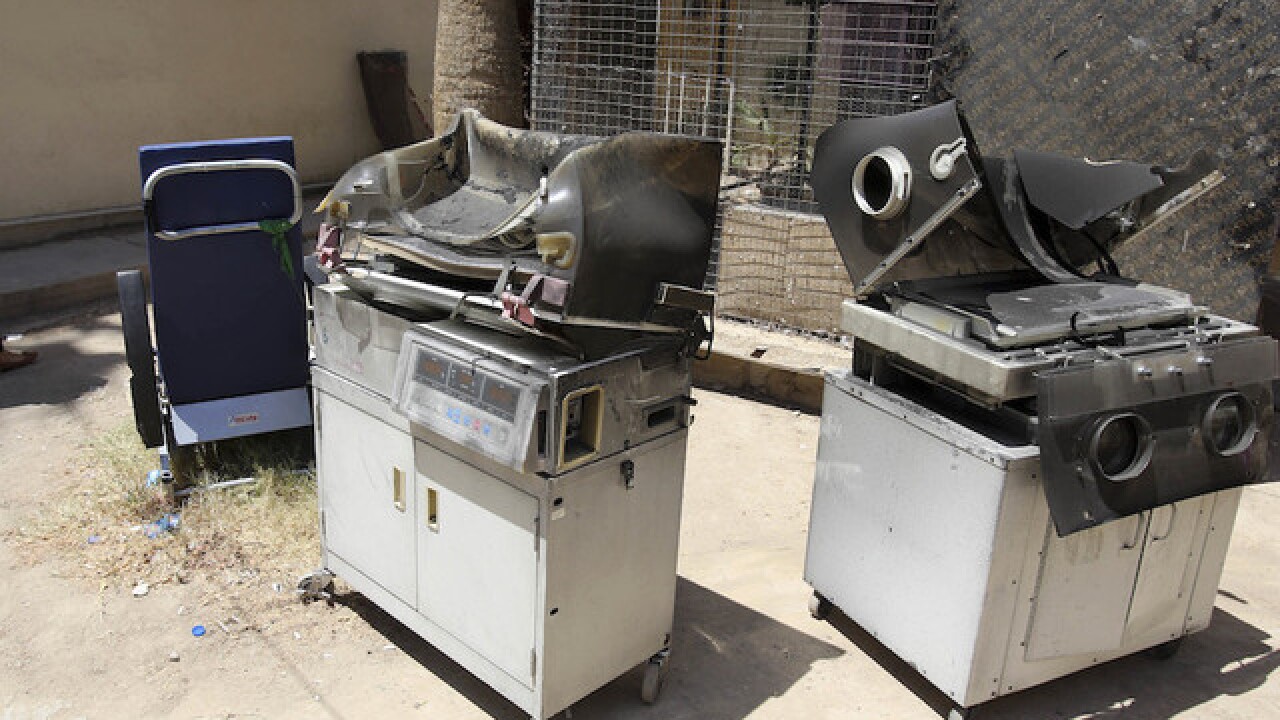 By morning, grief-stricken fathers searched for their missing newborns in vain while angry relatives gathered outside the Yarmouk hospital in western Baghdad blamed the government for the tragedy. Some of the babies who perished were prematurely born, a doctor at the hospital said.

The hospital director, Saad Hatem Ahmed, said the blaze broke out late on Tuesday night and that the initial investigation indicated it was an electrical fire. Ahmed said 29 female patients and eight babies were moved from the ward where the fire broke out and transferred to another hospital.

Baghdad authorities initially sealed off the hospital but later allowed some media into the site.

At the maternity ward, forensic teams in masks and protective gloves were seen searching through the rubble and charred pieces of furniture. A yellow tape stretched across the ward entrance, preventing reporters from getting closer.

"Some of the dead babies were preemies but not all of them," said one of the doctors at the Yarmouk hospital. He spoke on condition of anonymity as he was not authorized to talk to reporters.

Outside, crying relatives claimed some of the babies were still missing and demanded an answer from authorities.

One father, 30-year-old Hussein Omar, a construction worker, said he lost twins in the blaze, a baby boy and a girl born last week. The hospital told him to go look for them at another Baghdad hospital where some of the patients were moved to during the fire.

He said he looked and couldn't find them anywhere so he came back to Yarmouk. The hospital staff then told him to go look at the morgue.

"I only found charred pieces of flesh," Omar said, crying. "I want my baby boy and girl back. The government must give them back to me."

Nearby, Shaima Hassan stood dazed and trembling in shock after losing her two-day-old son. The 36-year old had spent more than a year visiting hospitals in and outside Iraq trying to conceive.

"I waited for ages to have this baby and when I finally had him, it took only a second to lose him," she said, holding a bunch of blackened documents with her hands, covered with burns.

She recounted how the chaos began at midnight at the ward, located on the ground floor.

"People started screaming, 'Fire, fire' and running," said Hassan. She and her husband, who was visiting them, ran toward the room for the newborns but were stopped by a wall of thick smoke.

"Then someone broke a window and threw me out," she added.

Eshrak Ahmed Jaasar, 41, said she is unable to find her four-day-old nephew.

"I came early this morning to see my nephew and his mother, but they told me about the fire," Jasaar said. "My nephew is still missing and his mother was moved to another hospital ward."

She said she was still in shock and felt very bitter.

"We pay the hospital employees thousands of Iraqi dinars to allow us in to get our loved ones basic food and milk, which they cannot provide," Jasaar said. "It's a corrupt government that doesn't care about its citizens and lets this happen."

Electrical fires are common in the Iraqi capital and elsewhere across the country because of shoddy maintenance and poor wiring. A lack of fire escapes also contributes to the danger whenever a fire breaks out. There is also widespread failure by construction companies and those providing building material to follow accepted standards.