DENVER, Colorado – The ire over a Colorado coffee shop’s apparent slight of gentrification in the Five Points neighborhood did not stop on Thanksgiving, as photos from the location circulating on social media show the shop has now been vandalized.

The backlash against ink! Coffee started after photos of a sandwich board sign which read “Happily gentrifying the neighborhood since 2014” went viral on Twitter Wednesday afternoon.

The chain was forced to issue an apology, first through Twitter and then through Facebook after the story gained national attention.

“Our (bad) joke was never meant to offend our vibrant and diverse community. We should know better. We hope you will forgive us,” a social media manager for the company wrote on Facebook.

But the company’s response wasn't enough for residents in the area who felt those words were just a hollow apology. A protest has already been planned outside the location at 29th and Larimer this Saturday at 1 p.m.

Tensions between the company and Five Points residents escalated on Thanksgiving, as photos from the location show the shop had been vandalized by early Thursday morning.

A photo from Denver-based photographer Armando Geneyro of Theyshootn, an international photography community based in Denver, shows the red walls of the shop are now decorated with the words “WHITE COFFEE” in all-black caps along with "gentrify deez nuts!" written on the shop's sign. 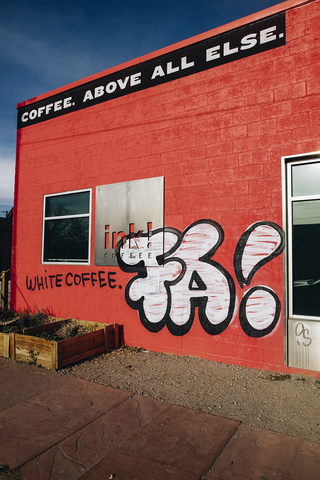 "I thought the sign was in poor taste. You don’t laugh at other’s distress. That doesn't justify this response, though,” said someone on Twitter after Denver7 shared the photo. “A sit-in of (sic) the people who are displaced by gentrification would be more demonstrative.

Just after noon on Thursday, ink! Coffee founder Keith Herbert tweeted out a letter apologizing once again for the gentrification sign. You can read the full letter below:

I have been following the comments on social media and listening to our customers, and I want you to know that I hear you. I have used the last 24 hours to listen to your perspectives, and to better educate myself on gentrification. I am embarrassed to say that I did not fully appreciate the very real and troubling issue of gentrification, and I want to sincerely apologize to those who understand firsthand the hardship and cultural consequences that gentrification has caused in the Five Points neighborhood, throughout the City and County of Denver and in communities throughout our state.

When our advertising firm presented this campaign to us, I interpreted it as taking pride in being part of a dynamic, evolving community that is inclusive of people of all races, ethnicities, religions and gender identities. I recognize now that we had a blind spot to other legitimate interpretations. I sincerely apologize – absolutely and unequivocally. Over the coming weeks and months, I will continue to educate myself and my colleagues about this issue, and we will find ways to demonstrate the depths of our contrition by taking meaningful steps to support our local community and its residents.

The company, which has removed its reviews section on Facebook, has seen a barrage of negative reviews on Yelp! where it currently holds a 1.5 star rating.

Meanwhile, some people passing by the store took pictures of the graffiti and said they understood the frustration behind it.

"We've seen a lot of development and started to call it RiNo, and those are primarily people that are white," said Andi Todaro, who lives nearby. "To not be sensitive about that is to basically point the finger at yourself and say, 'Yes. You are correct. I'm the biggest part of the problem.'"