ICE attempted to bring a Tennessee man into custody. His neighbors formed a human chain

The neighbors of an immigrant family in Tennessee formed a human chain to shield the family from ICE agents, who were attempting to apprehend the family on an administrative warrant. 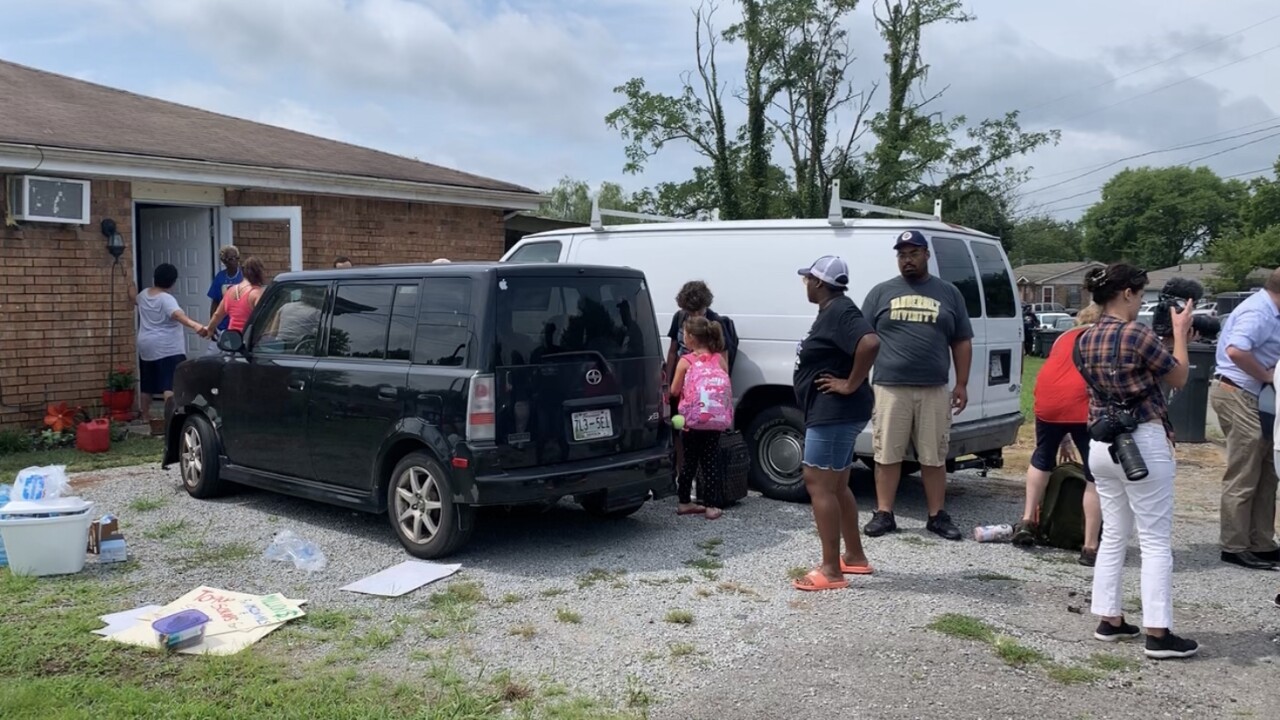 HERMITAGE, Tenn. — A U.S. Immigration and Customs Enforcement agent tried to bring a man in Hermitage, Tennessee, into custody, but neighbors formed a human chain to allow the man and his son to get home.

This happened Monday morning in the area of Brooke Valley Drive and Forest Ridge Drive. The man had entered into his van with his son when an ICE vehicle blocked him in.

Over the next few hours, neighbors came out to support their neighbor, bringing them water, gas and wet rags so they could stay in their van.

“We made sure they had water, they had food, we put gas back in the vehicle when they were getting low just to make sure they were OK,” Felishadae Young, a neighbor, said.

Eventually, after about four hours, the neighbors created a chain to allow the father and son to run into their home. They were able to do so and ICE left.

The ICE agent had an administrative warrant. While that does allow ICE to detain someone, it doesn't allow ICE to forcibly remove someone from their home or vehicle.

“There were two immigration officials sort of bullying a family inside of their own vehicle, telling them that they had an administrative warrant, which isn’t the same thing as a judicial warrant, and trying to harass them and fear them into coming out,” Daniel Ayoadeyoon, a local lawyer who came to the scene to help, said. “They were saying, 'if you don’t come out, we’re going to arrest you, we’re going to arrest your 12-year-old son,' and that’s just not legal, it’s not the right law.”

There were metro Nashville police officers at the scene. They were not trying to assist in the arrest, but simply there to have a presence after being called by ICE.

Several people near the vehicle broadcasted on Facebook Live during the event.

Neighbors said while ICE had left, they believe that they will be back, and if they do return, the neighbors said they plan to once again do everything in their power to support their neighbors.

“I know they’re gonna come back, and when they come back, we’re coming back," Young said.

After the event, the neighbors once again formed a chain to help the family into a car so they could leave their home.

“I could see if these people were bad criminals, but they’re not, they’re just trying to provide for their kids,” Stacey Farley, a neighbor, added. “The family don’t bother nobody, they work every day, they come home, the kids jump on their trampoline, it’s just a community.”

Metro Nashville Police released a statement on their role:

"An ICE representative telephoned the Emergency Communications Center at 7:19 a.m. He relayed that ICE attempted to stop a white Ford van, the driver would not stop, but did proceed to a driveway on Forest Ridge Drive. The caller said the driver was sitting in the van and was not getting out. He requested the police department’s assistance, but did not specify what he wanted the police department to do. When the police arrived, they learned that ICE was attempting to serve a detainer only on the individual. The man was sitting in the van with a 12-year-old boy.

The officers were instructed to not be involved in the service of the detainer, but to stand by from a distance to keep the peace if necessary. ICE ultimately left while the man was still in the van. The police left accordingly."

"It is my job as Mayor is to keep all Nashvillians safe.

This morning, ICE agents attempted to detain a Nashville resident. However, the agents did not end up detaining the resident, and no arrests were made.

Our police officers do not actively participate in immigration enforcement efforts and only serve as peacekeepers. The officers were at the incident today to keep neighbors safe and secure a perimeter.

I am keenly aware that this type of activity by our federal government stokes fear and distrust in our most vulnerable communities, which is why we do not use our local resources to enforce ICE orders.

I will continue to work with local advocacy organizations like TIRRC to make sure residents know their rights and that support and resources are available for undocumented immigrants should the need arise."

"I had just early voted this morning at Howard School, and began seeing social media comments about the unfolding situation in Hermitage and I decided to take a look.

MNPD's policy is that they do not assist ICE with CIVIL immigration enforcement. It appears that once the officers on the scene assessed that this was a civil immigration matter, they were instructed to not participate in serving the papers, to keep their distance, and to only be involved if it became necessary to keep the peace. To me, it looked like the officers were properly following their instructions.

There are reports I have heard that the ICE agents may have been telling the gentleman in the van that he had to give himself up or else MNPD would arrest him. If that's what they said, that's not true. Again, Metro's policy and MNPD's policy is to not be involved in federal civil immigration enforcement. Our city is less safe if people are afraid of MNPD."

This story was originally published by Catlin Bogard and Jesse Knutson on WTVF .