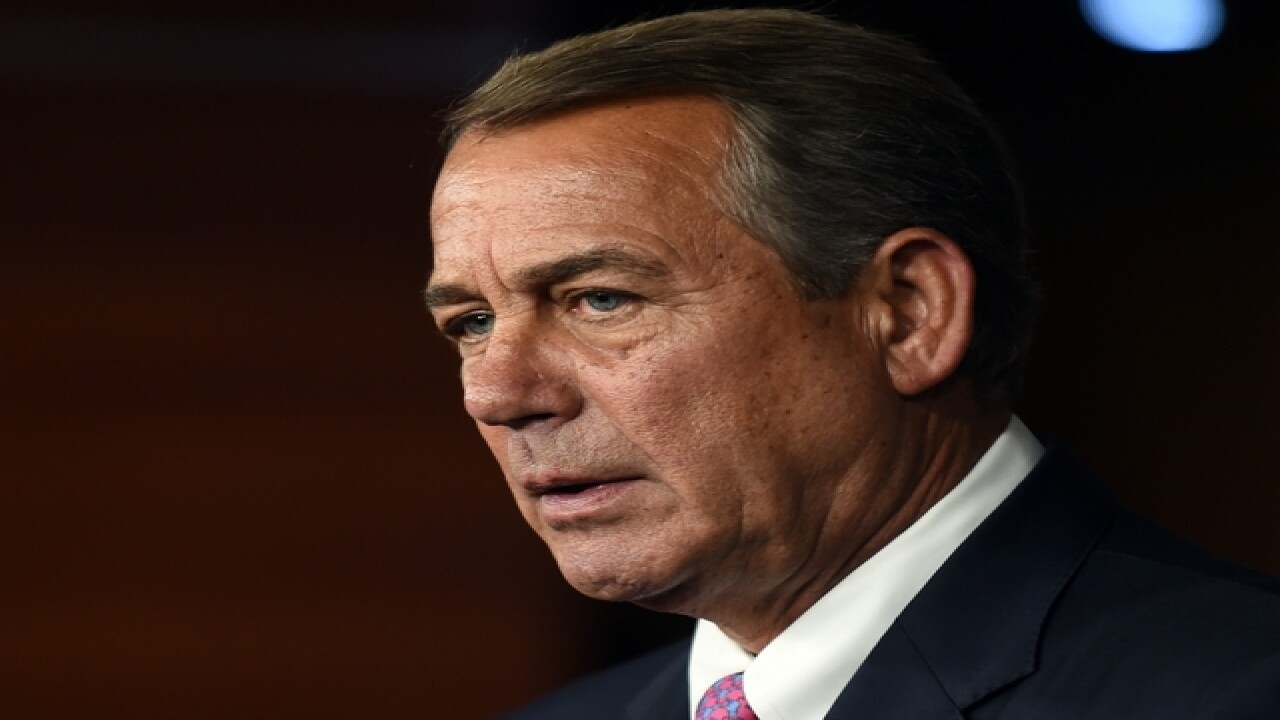 In a stunning move, House Speaker John Boehner informed fellow Republicans on Friday that he would resign from Congress at the end of October, stepping aside in the face of hardline conservative opposition that threatened an institutional crisis.

The 13-term Ohio Republican shocked his GOP caucus early Friday morning when he announced his decision in a closed-door session. It came one day after a high point of Boehner's congressional career, a historic speech by Pope Francis to Congress at Boehner's request.

A constant focus of conservatives' complaints, Boehner was facing the threat of a floor vote on whether he could stay on as speaker, a formal challenge that hasn't happened in over 100 years. That was being pushed by tea partyers convinced Boehner wasn't fighting hard enough to strip Planned Parenthood of government funds, even though doing so risked a government shutdown next week.

Boehner "just does not want to become the issue," said Rep. John Mica, R-Fla. "Some people have tried to make him the issue both in Congress and outside," Mica said.

Some conservatives welcomed the announcement.

Rep. Tim Huelskamp of Kansas said "it's time for new leadership," and Rep. Tom Massie of Kentucky said the speaker "subverted our Republic."

"I think it was inevitable," Massie said. "This is a condition of his own making right here."

But more mainstream Republicans said it would be a pyrrhic victory for the tea partyers.

"The honor of John Boehner this morning stands in stark contrast to the idiocy of those members who seek to continually divide us," said Rep. David Jolly of Florida.

"The shutdown caucus as I call them has a small victory," Jolly said.

With his relaxed and sociable demeanor, love of golf, and well-known tendency to cry in public, Boehner was widely popular among House Republicans. Though he is also known as a strong conservative, his tactics were never confrontational enough to satisfy the most conservative faction in the House.

Boehner's decision removes the possibility of a damaging vote to strip him of his speakership, a scenario that grew more likely amid the clamor over a possible shutdown.

Boehner took over the speakership in January 2011. His tenure has been defined by his early struggles to reach budget agreements with President Barack Obama and his wrestling with the expectations of tea party conservatives who abhorred his tendencies toward deal-making.

Two years ago, conservatives drove him to reluctantly embrace a partial government shutdown in hopes of delaying implementation of Obama's new health care law. The tactic was unsuccessful. Nonetheless, tea party lawmakers had been pressing him to retry the tactic to try to take away federal funding from Planned Parenthood following the disclosure of controversial videos involving its practices of procuring fetal tissue for research purposes.

As he told lawmakers Friday of his plan to resign, Boehner also announced plans to schedule a vote on a government funding bill that includes money for Planned Parenthood before next week's deadline. It will be likely to pass with Democratic support, notwithstanding conservative complaints.

Even as they praised Boehner for a selfless move, some of his allies questioned whether it would make a difference.

"I think it's an incredibly selfless act. I wish he were staying," said Rep. Carlos Curbelo, R-Fla. "I don't know that it will help us. Because he's not the problem in our conference."

The turmoil in Congress is playing out against an already roiling race for the GOP presidential nomination in which the candidates at the top of opinion polls are all Washington outsiders. Many of the GOP candidates have criticized Boehner and his Senate counterpart, Majority leader Mitch McConnell, R-Ky., who've seen their approval ratings sag even among Republicans.

"I'm not here to bash anyone," Rubio said told the buzzing crowd, "but the time has come to turn the page."

Although it's not certain who will succeed Boehner, the most obvious candidate is the No. 2 House Republican, Kevin McCarthy, a genial Californian who was first elected to Congress in 2006. McCarthy did not immediately announce any plans to run for speaker but would be expected to. Regardless, Boehner's departure ensures a major leadership race in which tea party conservatives would be expected to field a candidate.

Boehner was first elected to the House in 1990 and soon established a strongly conservative record. He was part of former Speaker Newt Gingrich's leadership team when Republicans took over the House in 1995 for the first time in four decades but was ousted from his leadership role in the wake of the GOP's disappointing performance in the 1998 midterms.

He won a 2006 race to succeed Tom DeLay as the House's No. 2 Republican when DeLay stepped aside as majority leader. He took over as the top Republican in the House in 2007 after Democrats retook the chamber.