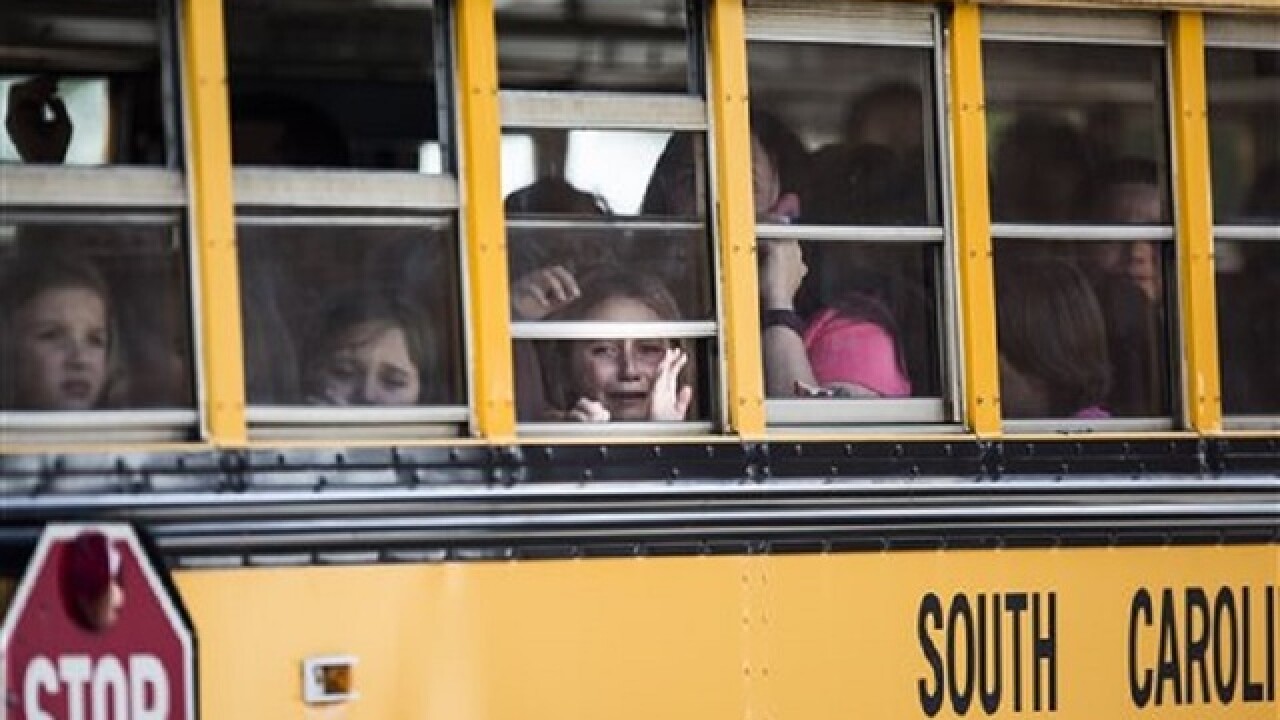 TOWNVILLE, S.C. (AP) — A judge will decide whether authorities can continue holding a teenager arrested after a school shooting that left two students and a teacher wounded and a tiny South Carolina community coping with the aftermath.
The juvenile who authorities say is also suspected of fatally shooting his father before the violence at Townville Elementary School was due in court Friday morning for an initial hearing.
Anderson County Solicitor Chrissy T. Adams said the public wouldn't be allowed in because the suspect is a juvenile and prosecutors won't provide additional details about the shooting, which occurred Wednesday.
"While I realize there are many unanswered questions, the investigation into this tragedy is in a critical stage, and is ongoing," she said in a statement.
On Thursday, firefighters recounted the harrowing scene at the school, in a quiet community near the Georgia line. When two volunteer firefighters rolled up to the school, they said they found only a wrecked black pickup truck at the playground. There was no gunman and no one inside the truck.
Within minutes, though, it was clear something awful had happened. One went inside to help treat the wounded and the other searched for the shooter, and neighbors are now calling them heroes.
"This was more than just another call to us. This incident occurred in the school where our children and the children of the community attend," Townville Fire Chief Billy McAdams said Thursday during a news conference, pausing to keep his emotions in check.
Authorities say the teen, who hasn't been identified because of his age, shot his father, 47-year-old Jeffrey Osborne, at their home before driving the pickup 3 miles down a country road lined with chicken houses and pine trees to Townville Elementary. He only had to make two turns to arrive at the red brick school, where he crashed the truck, got out and fired at a door as it was being opened for recess, authorities said.
Bullets struck two students and a first-grade teacher, and the building was immediately placed on lock down.
Anderson 4 Superintendent Joanne Avery said staff saved lives by flawlessly implementing active-shooter training drills conducted with students over the past few years — at Townville Elementary, most recently just last week.
Though shot in the shoulder, the teacher "was with-it enough" to close the door, lock it and barricade the students, Avery said.
"If he'd gotten in the school, it would've been a different scenario," she said.
The shooter then fired toward students on the playground but missed. A teacher who heard the first gunshot was able to get those students safely inside, Avery said.
One of the wounded, 6-year-old Jacob Hall, remained in critical condition Thursday and was said to be fighting for his life. A sign outside a diner conveyed the sentiments of an entire community: "Pray for Jacob. Pray for Townville."
The shot teacher and another student who was hit in the foot were treated and released from a hospital, officials said.
Classes are scheduled to resume at the school Monday, but second-grader Mattie LeCroy doesn't want to go. Asked whether she was scared to return to school, the blond-haired 7-year-old simply nodded her head "yes" after dropping off flowers for Jacob with her mom at the town's fire station.
The violence was a punch in the gut to people around Townville, where residents say some families have lived on the same land since before the Civil War.
"It's just a shock. Why in the world would that boy do that?" said Douglas Ayers, who lives on the road linking the Osborne home and the school.
Authorities said they don't yet know a motive for the shooting and they were not sure if the students and teacher were targeted or shot randomly.
Anderson County Sheriff John Skipper said the teen had been homeschooled, but the reason isn't clear.
The fire chief said he and firefighter Jamie Brock were working on his farm when they got the call about an active shooter at Townville Elementary. They rushed to the school and found the empty pickup.
Teachers told them there were wounded inside, and Brock suggested to the fire chief that he go inside to help because he was a paramedic. Alongside a school nurse, the chief attended to Jacob, who was the most seriously injured.
In the meantime, law enforcement swarmed the school and Brock looked for the shooter, finding him near the back of the school building.
"Feeling it was imperative to the safety of the students, the teachers and all the responders that were on site, he immediately confronted and subdued that shooter," the chief said. "He was able to keep him on the ground until law enforcement could place him into custody."
The teen's mother, Tiffney Osborne, said in a statement that the family "cannot express the devastation we feel at the loss of our beloved Jeff." She was at work at the time of the shooting, the sheriff said.
Both Tiffney and Jeffrey Osborne's first marriages ended in divorce before they got married. They each had children, who are now adults, with their exes.
Authorities said audio from the 911 calls will not be released while the investigation is ongoing.
Copyright 2016 The Associated Press. All rights reserved. This material may not be published, broadcast, rewritten or redistributed.