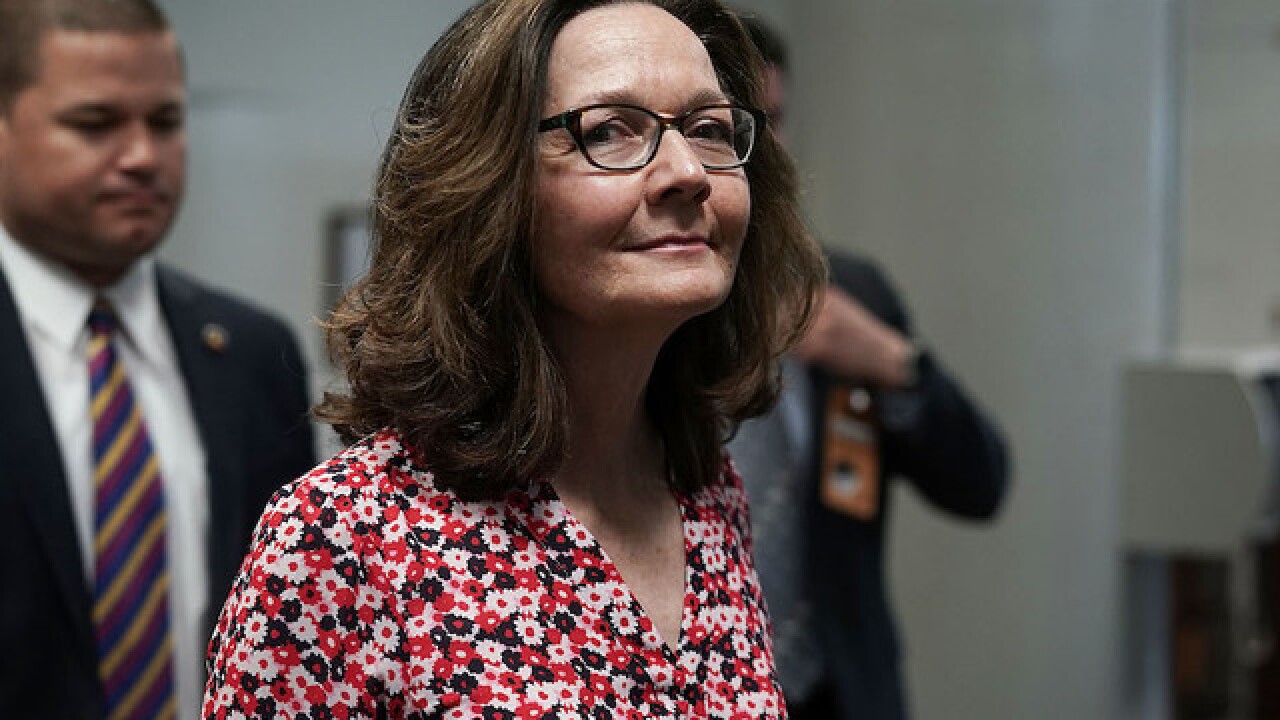 Copyright Getty Images
Alex Wong
<p>WASHINGTON, DC - MAY 07: CIA nominee Gina Haspel (R) is seen waiting for the Senate subway while she is on Capitol Hill for meetings with senators May 7, 2018 in Washington, DC. Haspel will attend her confirmation hearing before the Senate Intelligence Committee on Wednesday. (Photo by Alex Wong/Getty Images)</p>

Gina Haspel, President Donald Trump's pick to be the next CIA director, pledged Wednesday she would not restart the CIA's detention and interrogation program and that she would not follow an order that she found morally objectionable.

"I would not allow CIA to undertake activity that I thought was immoral, even if it was technically legal," Haspel said. "I would absolutely not permit it."

Haspel was pressed at her confirmation hearing by Senate Intelligence Committee's top Democrat Virginia Sen. Mark Warner and other Democrats about her views on the George W. Bush administration's interrogation program as well as her role in it.

Democrats asked Haspel for more details about her time supervising one of the CIA's black sites, and her role in the destruction of CIA interrogation tapes.

"Do you believe program was consistent with American values?" Warner asked Haspel.

Haspel responded by saying that "we have decided to hold ourselves to a stricter moral standard," but she did not weigh in on her views about the program itself.

Haspel told the committee that the decision to destroy the tapes was not hers, but she said she was "absolutely an advocate" if it could be done legally.

"I absolutely was an advocate, if we could within and conforming to US law, and if we could get policy concurrence to eliminate the security risk posed to our officers by those tapes," Haspel told Democratic Sen. Dianne Feinstein of California.

In her opening statement, Haspel said she would not restart the interrogation program in an effort to convince skeptical senators to back her nomination.

"Having served in that tumultuous time, I can offer you my personal commitment, clearly and without reservation, that under my leadership, on my watch, CIA will not restart such a detention and interrogation program," Haspel said in her opening statement, adding, "I fully support the detainee treatment required by law, and just as importantly, I will keep CIA focused on our collection and analysis missions that can best leverage the expertise found we have at the agency."

Haspel added that she believes it's now clear that the "CIA was not prepared to conduct a detention and interrogation program."

Warner expressed skepticism about confirming Haspel, questioning "the message the Senate would send" by appointing a director who worked in the interrogation program.

"Ms. Haspel has stated that the law has changed and that the RDI program is no longer legal. She has committed to upholding the law. I appreciate that, but it is not enough," Warner said. "We must hear how you would react if the president asks you to carry out some morally questionable behavior that might seem to violate a law or treaty. How will you respond if a secret DOJ opinion authorizes such behavior and gives you a 'get out of jail free' card?"

Senate Intelligence Chairman Richard Burr praised Haspel as the most qualified nominee that could have been chosen for the post, and argued that her confirmation hearing should not be used to put the George W. Bush administration's interrogation program on trial.

"I'd like to set the record straight and make clear to those in attendance, and the American people, that this hearing is not about programs already addressed by executive order, legislation and the court of law — it is about the woman seated before you," Burr said.

For lawmakers on the fence, Haspel's willingness to answer questions about her past will be a major factor in whether she will be able to clinch Democratic votes. And several senators from both parties say her answers will matter -- they're looking to her hearing to decide how they will vote on her nomination.

Sen. Angus King, an independent from Maine who is still undecided on Haspel, said the hearing was going to be key in whether he supports her.

"It's an important hearing," King said. "My principal concern is about the tapes' destruction and what she was thinking, what her role was. That's the essence of it."

Haspel was selected as deputy CIA director last year, a position that did not require Senate confirmation. But President Donald Trump's selection of Haspel to succeed Mike Pompeo atop the agency has been contentious ever since she was tapped in March. Her nomination was quickly opposed by human rights groups and many Democrats, as well as Republican Sen. Rand Paul of Kentucky, over her role in the George W. Bush administration's interrogation and detention program, in which critics say the CIA tortured terror detainees.

Critics point to Haspel's time leading the CIA's black site in Thailand in 2002, where harsh interrogations were conducted. Then in 2005, she was chief of staff to the CIA's clandestine chief, Jose Rodriguez, when he ordered the destruction of tapes of CIA interrogations.

With Paul's opposition and Sen. John McCain's absence from Washington as he fights brain cancer, Haspel will need at least some Democratic support to win the simple majority needed for confirmation. Republicans are looking to the same red-state Democrats who voted for Pompeo's confirmation as secretary of state last month to also back Haspel. Several have signaled they're open to supporting her.

Sen. Bill Nelson of Florida pointed to support for Haspel from former Obama and Bush administration officials, while Sen. Joe Manchin of West Virginia said she "has been a true soldier and done her job."

Other Democrats, however, say the CIA has failed to publicly disclose key details about her record that the public should have access to before she is confirmed to a Cabinet-level position.

Several Democrats on the Senate Intelligence Committee have urged the CIA and Director of National Intelligence Dan Coats to make Haspel's record in the interrogation program public.

The CIA has declassified some materials, including an internal 2011 report on the tape destruction clearing her of wrongdoing. And the agency provided additional classified material to senators but has argued that the information cannot be made public for security reasons.

Democrats say the response is insufficient, and they have complained that the CIA is selectively releasing favorable parts of Haspel's record.

They are also warning that Haspel will say little to nothing about the controversial parts of her career during the open hearing -- there is also a classified session for senators -- because they remain classified.

"As of now, this is headed toward a secret confirmation process," said Sen. Ron Wyden, an Oregon Democrat, adding later, "It is going to take place in public. Yet I believe, as of now, people will not know much of what the nominee was doing during that crucial period and will not know a number of the facts ... that relate to her record and who she really is."

Haspel and the CIA tried to push back on the criticisms of her record in the lead-up to the hearing.

Senate Intelligence Chairman Richard Burr has been a vocal supporter of Haspel's, and has argued that the CIA cannot declassify the materials that Democrats are seeking.

"This is an opportunity for the most qualified candidate nominated for that post to have an opportunity to share with America her expertise, her knowledge and her passion for the agency," the North Carolina Republican said.

Haspel's leadership experience has left many in the GOP leadership confident she'll get the job.

"She's got the résumé. She's got all the field work. She knows this job cold," Sen. John Thune of South Dakota, a member of GOP leadership, told CNN. Thune said Haspel "enjoys broad support among Republicans. The question is are there Democrats that will vote for her?"