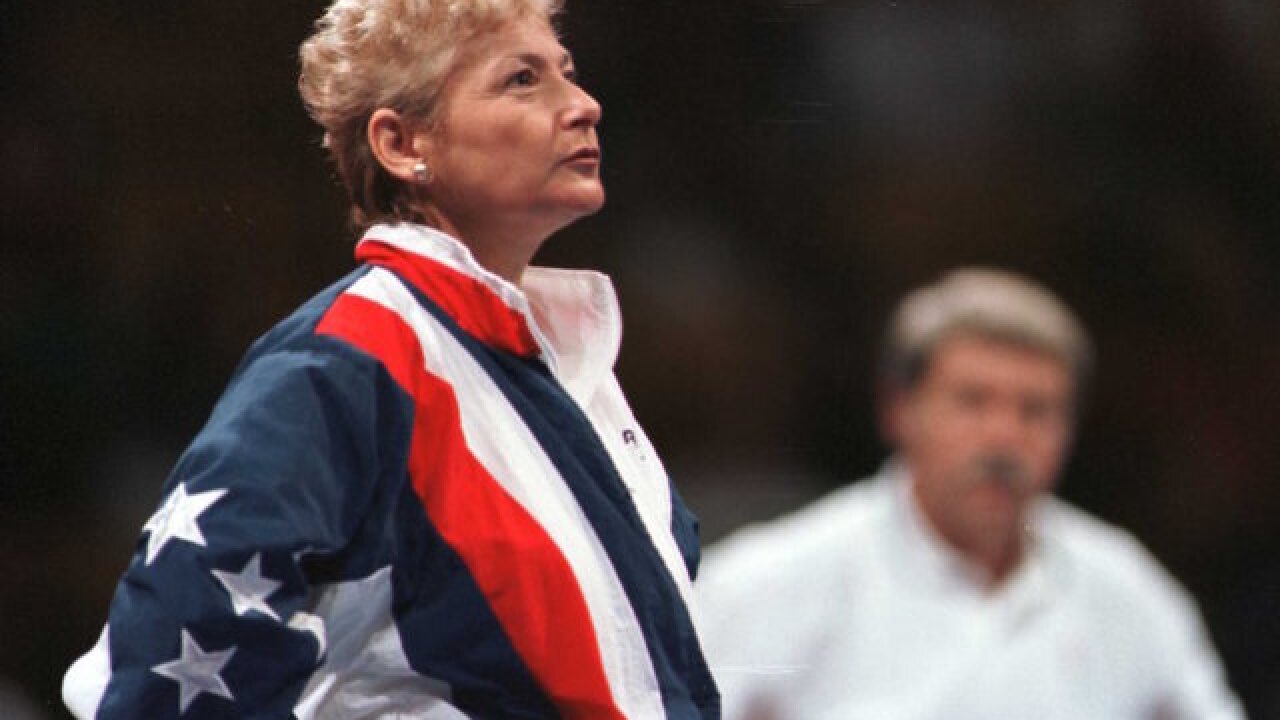 Copyright Getty Images
Doug Pensinger
<p>30 June 1996: Gymnastics coach Martha Karolyi watches Kerri Strug warm up prior to competition in the US Gymnastics Olympic Trials at the Fleet Center in Boston. Strug earned a spot on the 1996 US Women's Gymnastics Team as did coach Martha Karolyi when she received the nomination to be head coach. Her husband Bela Karolyi, right, will go to Atlanta as a personal coach for Kerri Strug and Dominique Moceanu. Mandatory Credit: Doug Pensinger/Allsport</p>

Legendary USA Gymnastics coaches Bela and Martha Karolyi said they did not know former team doctor Larry Nassar was abusing girls at their gymnastics facility and declined to take responsibility for his abuse.

She said she's aware that people have questioned how the Karolyis, the most powerful figures in women's gymnastics, didn't know about Nassar.

"But if you couldn't suspect anything -- I heard during the testimonies that some of the parents were in the therapy room with their own child and Larry Nassar was performing this," she said, "and the parent couldn't see. How I could see?"

The comments on the "Dateline" report are the first public statements from the Karolyis on the Nassar scandal. The report also included the first TV interview with McKayla Maroney, the gold medal gymnast who said she was abused hundreds of times by Nassar.

Nassar, the former USA Gymnastics team doctor and Michigan State University physician, admitted in criminal court to using his influence as a trusted medical doctor to sexually abuse young girls over two decades. He was sentenced to at least 40 years and is currently serving time in federal prison on child pornography charges.

The remarkable extent of his abuse has led to an array of lawsuits and investigations into how the institutions allowed the abuse to continue for so long.

Bela and Martha Karolyi denied any wrongdoing or knowledge of Nassar's years of abuse at the Karolyi ranch under their supervision, and they positioned themselves as victims of his lies.

"This miserable man destroyed everything, whatever I -- I was working for. My -- my facilities, my dreams, my -- to be honest," Bela Karolyi said.

In her first TV interview, McKayla Maroney questioned how the Karolyis could not know that was happening in their own facility.

Maroney said she was sexually abused hundreds of times by Nassar. And when she finally got the nerve to speak up about it, she was met with silence, Maroney said.

In 2011, when Maroney was 15, Nassar abused her in a hotel room in Tokyo before the world championships, she said. For years, she had believed Nassar when he said his "treatments" were a legitimate medical treatment, but this time she realized his actions were abuse.

The next day, she spoke up to her fellow gymnasts and to coach John Geddert, she said.

She knew they heard her because "people gasped," Maroney added.

Fellow gymnast Aly Raisman, who was also in the car, said she remembers hearing Maroney talk in graphic detail about what Nassar did to her. But coach Geddert said nothing, Raisman said.

"That was the moment that I shut it down," Maroney said. "In my head, I was never going to speak about him again. And I was just going to go along with it."

Raisman has previously spoken to CNN about that car ride from her perspective. Geddert did not respond to a request for comment at the time, and he and his attorney declined to comment for a CNN story last month investigating what gymnasts said was his emotional abuse.

USA Gymnastics released a lengthy statement on Sunday outlining the actions it took at the time and in the wake of the Nassar investigation.

"USA Gymnastics admires the courageous women who shared their deeply personal experiences about the impact Larry Nassar had on their lives," the organization said. "Their powerful voices and stories will continue to be a basis for our future decisions."

"USA Gymnastics is sorry that any athlete has been harmed during her or his gymnastics career, and we are committed to creating a culture that empowers and supports our athletes and focuses on our highest priority, which is the safety and well-being of our athletes."