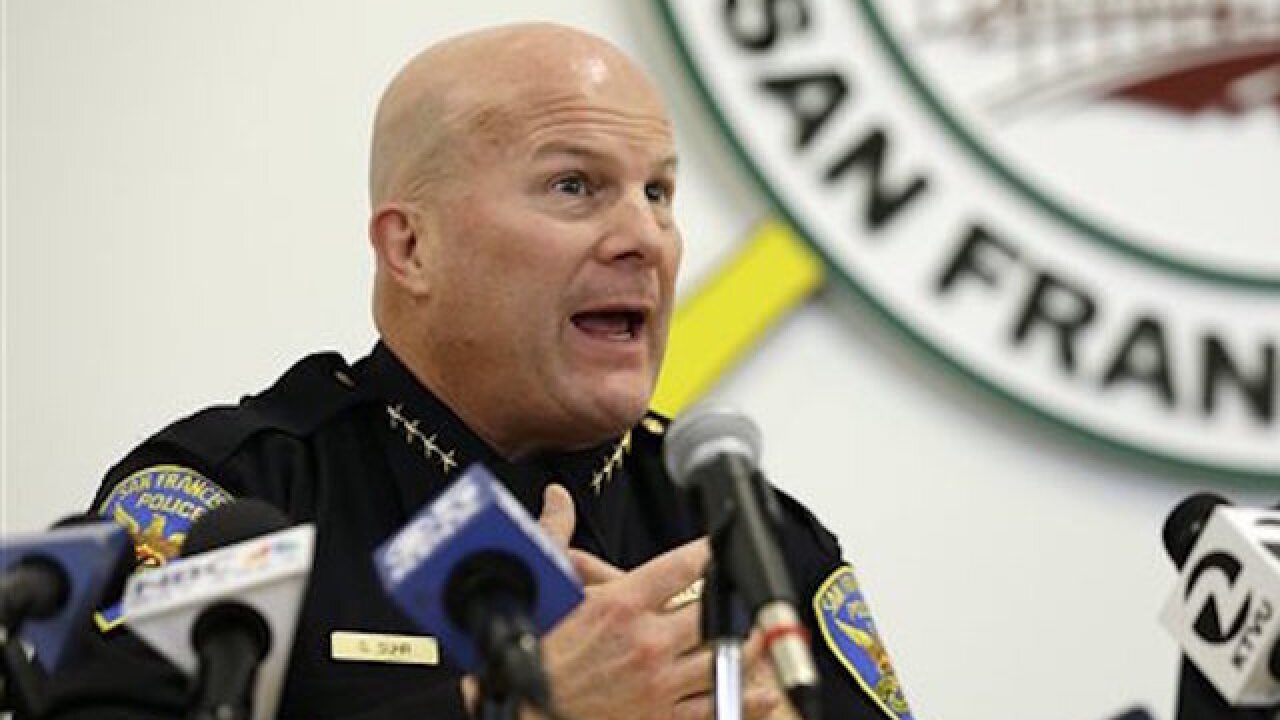 SAN FRANCISCO (AP) — The death of a young black woman in a stolen car proved to be the last in a series of shootings and racially tinged scandals that finally led to the resignation of San Francisco's police Chief Greg Suhr.
A new acting chief is now tasked with mending the department's strained relations with the black community.
Deputy Chief Toney Chaplin, a 26-year department veteran who is black, was appointed acting chief by Mayor Ed Lee after Suhr's resignation Thursday.
Chaplin had the confidence of at least one key supporter.
"Toney Chaplin has the charisma, chemistry and courage to lead this department," said Rev. Amos Brown, the president of the San Francisco chapter of the NAACP.
Brown had also supported Suhr through the department's difficulties, and said the police's problems "are bigger than one man."
Pressure had been mounting for the resignation of Suhr since December, when five officers fatally shot a young black man carrying a knife. Since then, there have been protests, moves to reform the police department and a federal review of its protocol.
Mayor Ed Lee supported the chief in December and again in April after it was disclosed that three officers had exchanged racist text messages.
But hours after Thursday's shooting, Lee asked for Suhr's resignation and received it.
The texting scandal was the second to rock the department after it was also disclosed that several officers had exchanged racist messages dating back to before Suhr was chief. But Suhr was criticized for moving too slowly to fire the offending officers, all of whom have retained their jobs because of the chief's failure to start disciplinary action when he first found out about the inappropriate.
Suhr could not be reached for comment Thursday.
Protesters demanding Suhr's resignation drowned out the mayor's second inaugural speech in January, and demonstrators forced the mayor to abandon a planned speech on Martin Luther King Jr. Day later that month.
Nonetheless, the mayor stood behind the chief, and the two announced a series of reforms aimed at reducing police shootings. The two also called in the U.S. Department of Justice to review the department's policy and procedures.
Suhr renewed his call for reform April 8 after an officer shot and killed a Latino homeless man who police said refused orders to drop a large knife.
But Suhr lost Lee's backing Thursday, after a patrol car prowling an industrial neighborhood for stolen vehicles came across a 27-year-old black woman sitting behind the wheel of a parked car.
Police said the car had been reported stolen.
Officers turned on the patrol car's lights and sounded its siren, and the woman to sped off in the stolen car. A few second later and about 100 feet away, the stolen car slammed into a parked utility truck.
The officers jumped out of the patrol car and raced to the wreckage, where the woman was revving the car in an effort to disengage the auto from the truck. Suhr said a witness reported that the officers opened the driver's door and began grabbing the woman in attempt to arrest her.
At that point, a sergeant fired one fatal round.
"This is exactly the kind of thing with all the reforms we are trying to prevent," Suhr said Thursday, less than two hours after the shooting and before he resigned.
"The progress we've made has been meaningful, but it hasn't been fast enough," Lee said in a brief statement at City Hall. "Not for me, not for Greg."
The identity of the dead woman has not been released. She was shot in the same neighborhood where the five officers shot and killed Mario Woods, the 26-year-old black man carrying a knife.
Video of Woods' shooting circulated widely online and led to protests and calls for Suhr's resignation.
But at the time, the chief still enjoyed the backing of the mayor and other community leaders, who said they wanted to give Suhr time to implement the reforms he promised.
"Some of the reforms underway might have prevented or clarified today's incident," the mayor said Thursday. "We need to turn these plans into actions."
Lee appointed Suhr chief in 2011. He was a 34-year veteran of the department who rose through the ranks despite several professional missteps.
He was demoted from deputy chief to captain in 2009 after failing to file a police report after a female friend told him she had been assaulted by her boyfriend.
The city last year paid $725,000 to settle a wrongful termination lawsuit filed by a former department lawyer who recommended Suhr be fired for failing to report his friend's assault. When Suhr became chief, he fired the lawyer.
Suhr was also re-assigned from head of patrol in 2005 to guarding the city's water supply, which was widely viewed as a demotion.
Two years earlier, he was one of several officers indicted in the city's so-called "Fajitagate" for allegedly trying to cover up an investigation of three off-duty officers who had beaten up a waiter and took his bag of Mexican food. The indictment was tossed out.
Associated Press 2016