WINTER WEATHER: 2,000 flights may be cancelled 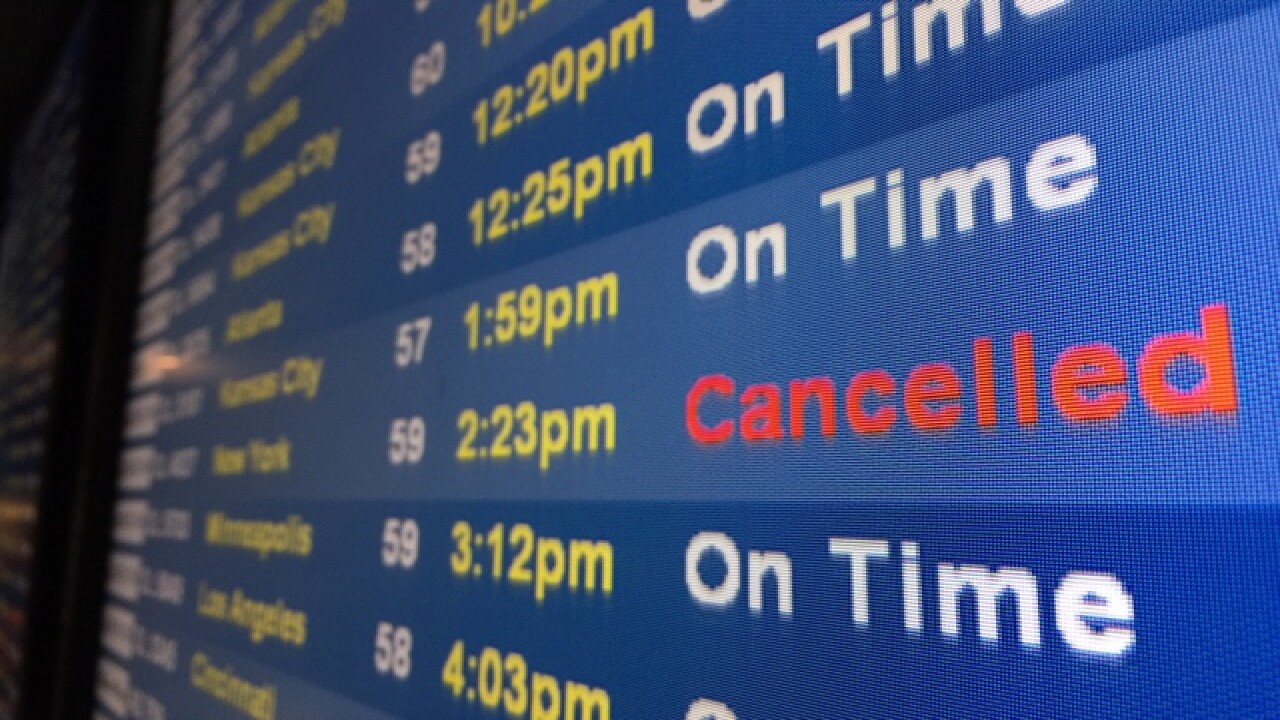 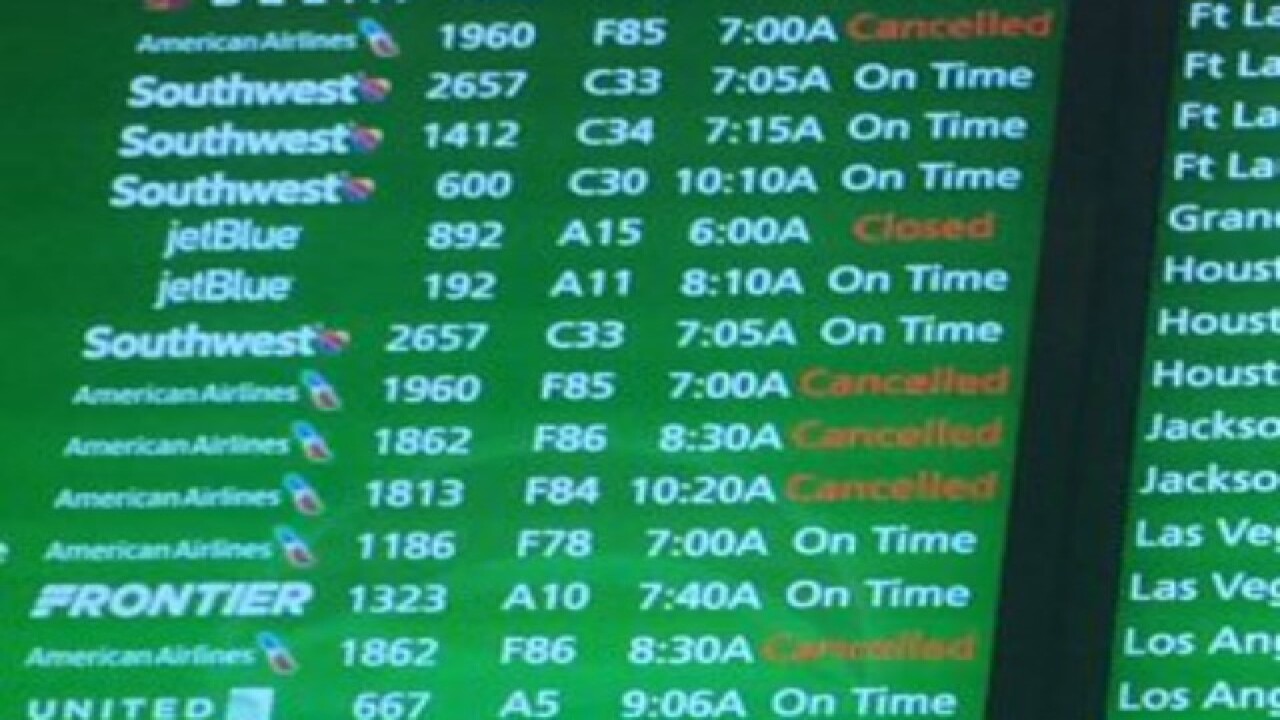 The forecast for a historic blizzard has been there for days, looming over the nation's capital like the UFO from "Independence Day." Projected snowfall totals have ticked steadily upward, to the point where the National Weather Service — known for its conservative predictions — says more than 2 feet of snow could land on Washington.

Residents and elected officials throughout the Eastern United States are heeding the warning.

States of emergency have been declared in five states and the District of Columbia. Schools and government offices are being closed pre-emptively. Thousands of flights have been canceled. Food and supplies are disappearing from grocery and hardware stores. College basketball games and concerts will have to wait.

"It's going to be dangerous out there," said Tonya Woods, 42, a Washington Metro station manager who lives in suburban Clinton, Maryland. "I say they should shut things down."

MORE: Scroll down for links to check for flight delays and other weather resources.

Late Thursday, she got her wish. The federal government announced its offices would be closing at noon Friday. The capital's subway system announced earlier in the day that it will shut down entirely late Friday night and remain closed through Sunday for the sake of employee and rider safety. Underground stations usually stay open during major snowstorms.

The director of the National Weather Service said all the ingredients have come together to create blizzards with brutally high winds, dangerous inland flooding, white-out conditions and even the possibility of thunder snow, when lightning strikes through a snowstorm.

The snowfall, expected to continue from late Friday into Sunday, could easily cause more than $1 billion in damage and paralyze the Eastern third of the nation, weather service director Louis Uccellini sad.

"It does have the potential to be an extremely dangerous storm that can affect more than 50 million people," Uccellini said at the service's Weather Prediction Center in College Park, Maryland.

RELATED: SnowCast tells how much snow will fall at your location

Washington looks like the bull's-eye of the blizzard, and New York City is just inside the slow-moving storm's sharp northern edge, which means it is likely to see heavy accumulations, Uccellini said. Boston will probably get off easy this time, forecasters said.

Weather Prediction Center meteorologist Paul Kocin, who with Uccellini wrote a two-volume textbook on northeast snowstorms, estimated more than 2 feet for Washington, a foot to 18 inches for Philadelphia and eight inches to a foot in New York.

The snowfall could be as heavy as 1 to 3 inches per hour, and continue for 24 hours or more, Kocin said.

That could put this snowstorm near the top 10 to hit the East, with the weekend timing and days of warning helping to limit deaths and damage, said Kocin, who compared it to "Snowmageddon," the first of two storms that "wiped out" Washington in 2010 and dumped up to 30 inches of snow in places.

Unfortunately, more than just snow is coming. Uccellini said it won't be quite as bad as Superstorm Sandy, but people should expect high winds, a storm surge and inland flooding from Delaware to New York. Other severe but non-snowy weather is likely from Texas to Florida as the storm system chugs across the Gulf Coast, gaining moisture.

At a supermarket in Baltimore, Sharon Brewington stocked her cart with ready-to-eat snacks, bread, milk and cold cuts. In 2010, she and her daughter were stuck at home with nothing but noodles and water.

"I'm not going to make that mistake again," Brewington said.

The Mid-Atlantic region is notorious for its struggle to cope with winter weather, and a light dusting on Wednesday night served as an ominous prelude to the massive blizzard.

Less than an inch of snow was enough to immediately turn roadways treacherous in the District, Maryland and northern Virginia, causing hundreds of accidents and leaving drivers gridlocked for hours. President Barack Obama wasn't spared, as his motorcade slowly weaved and skidded along icy streets to the White House.

Mayor Muriel Bowser apologized to the city, saying more trucks should have been sent out to lay salt ahead of the snow — a mistake she said wouldn't be repeated ahead of the much bigger storm arriving Friday.

White House spokesman Josh Earnest said Obama would hunker down at the White House and is confident local officials will get it right.

On Thursday, icy conditions caused accidents that killed two drivers in North Carolina and one in Tennessee. A truck with a snowplow killed a pedestrian while it was snowing in Maryland.

States of emergency were declared in Tennessee, North Carolina, Virginia, Maryland, Pennsylvania and parts of other states, where road crews were out in force Thursday. Blizzard warnings or watches were in effect along the storm's path, from Arkansas through Tennessee and Kentucky to the mid-Atlantic states and as far north as New York.

Train service could be disrupted as well, by frozen switches, the loss of third-rail electric power or trees falling on overhead wires. About 1,000 track workers will be deployed to keep New York City's subway system moving, and 79 trains will have "scraper shoes" to reduce icing on the rails, the Metropolitan Transit Authority said.

All major airlines have issued waivers for travel over the weekend, allowing passengers to rebook onto earlier or later flights to avoid the storms. The flight tracking site FlightAware estimates airlines will cancel at least 2,000 flights Friday and another 3,000 Saturday, which is the slowest travel days of the week. By Sunday afternoon, however, the airlines hope to be back to full schedule.

One major event in Washington was still on: the March for Life, an annual anti-abortion rally that's usually one of the largest events on the National Mall. It will be held Friday, the anniversary of the Supreme Court's Roe v. Wade decision.

The U.S. Capitol Police said sledding on Capitol Hill — which only recently became legal after an act of Congress — would be welcome for the first time in decades, as long as conditions are safe.

Keep an eye on your local forecast at http://abcactionnews.com/weather

For travel and flight information, check these websites: