Dozens are still unaccounted for in hard-hit Mexico Beach, days after Hurricane Michael 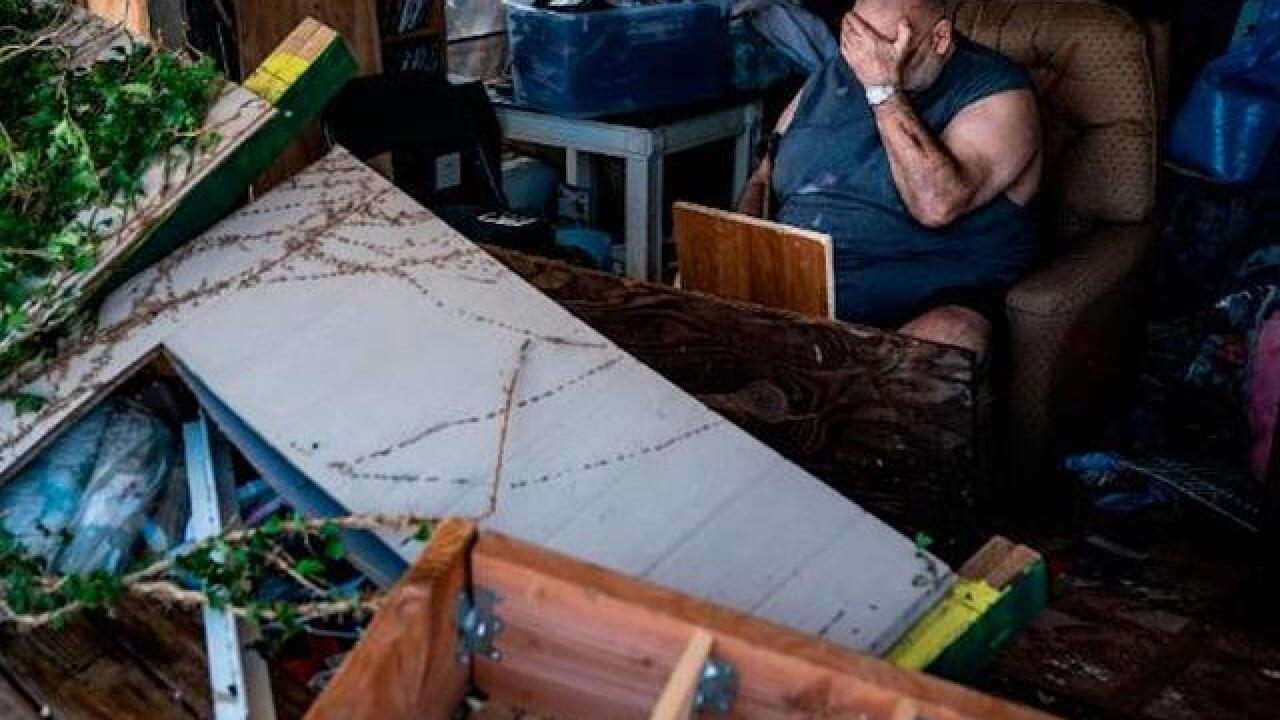 Copyright 2018 Scripps Media, Inc. All rights reserved. This material may not be published, broadcast, rewritten, or redistributed.
The Washington Post
<p>PANAMA CITY, FL - OCTOBER 11 : Benny Hobson, 69, sits in his recliner after loosing the front wall of his house after category 4 Hurricane Michael made land fall along the Florida panhandle Wednesday, on Thursday, Oct. 11, 2018 in Panama City, FL. Hobson rode the storm at his home with his wife and three dogs. (Photo by Jabin Botsford/The Washington Post via Getty Images)</p>

Florida and Georgia are reeling from the brutal effects of Hurricane Michael, which slammed into the Florida Panhandle Wednesday.

The widespread destruction has left many people living in dire conditions. Residents have been waiting in long lines to collect bottled water and ready-to-eat meals (MREs) at several distribution centers. Helicopters are also airdropping food and water to remote areas.

Early Monday, more than 250,000 customers were still without power in seven states from Florida to Virginia. The death toll remains at 18 but authorities say it could climb. About 30 to 35 people are unaccounted for in the Mexico Beach area, Police Chief Anthony Kelly said.

The declarations give affected residents and businesses access to federal aid and funding. The President and first lady are scheduled to visit Florida Monday where they are expected to survey damage from Michael.

On Sunday, FEMA said more than 58 evacuations and 403 rescues or assists had been completed by several agencies in the days since Hurricane Michael made landfall. Authorities also completed 3,362 shelter-in-place checks, and performed structural assessments on 7,257 structures in Florida.

FEMA has 14 teams in place in Florida to help people register for disaster assistance, the release said. There are also 17 distribution points throughout Florida and Georgia where people can get food and water in places where stores remain closed or there are limited supplies.

Trying to retain sense of normalcy

Some people have taken matters into their own hands and resorted to looting.

"This (storm) hit so hard and so fast that the different aspects of human nature is going to come out, and people are going to do anything to survive," Panama City resident Christopher Donahue told CNN affiliate WEAR-TV.

Panama City Fire Department Division Chief Scott Flitcraft told CNN that within three or four hours of the storm's impact, many dollar stores and convenience stores in the area were looted.

Others in the city are trying to retain a sense of normalcy.

Hiland Park Baptist Church in Panama City sustained some damage in the storm, so the church held its Sunday morning service outside.

"For the last couple of days I've just been walking down the streets, going from house to house," Senior Pastor Steven Kyle told CNN. "And one of the first things that everybody has said is, 'Are we going to have church? Can we have church?'"

"They just wanted the community," he said.

Residents could still be trapped

Hundreds of calls from people around the country looking for their relatives continue piling up as emergency crews attempt to reach the most remote areas.

Crews are using bulldozers to move debris and cutting trees with chainsaws to clear highways and hundreds of roads blocked by the wreckage.

"What's taking up most of your time right now just gaining access to some of these areas," said Panama City Fire Chief Alex Baird.

The fire department has received more than 200 calls for checks on residents and Baird said it could take days or weeks before they complete them. Residents still unaccounted for could be trapped in isolated areas and crews need to go door-to-door because there is no power and cellphone service is spotty.

At least 18 people have died since Hurricane Michael made landfall Wednesday, eight in Florida including Steven Sweet, 44, who died when an oak tree fell on his Gretna home.

An 11-year-old girl died in Georgia when a carport came crashing through the roof. Two of the three people who were killed in North Carolina died when their vehicle struck a tree that had fallen because of high winds, said Adrienne Jones, deputy director for the McDowell County Emergency Medical Services.

Six people died in Virginia. Four drowned and a firefighter was killed when a tractor-trailer lost control and hit his truck on a wet highway in Hanover County. The Virginia Department of Emergency Management said Saturday the sixth person died in Charlotte County.

The seaside town of Mexico Beach was virtually wiped away, and rescue teams have been using dogs as they combed through rubble piles and mangled structures one more time looking for survivors.

About 280 of the town's 1,200 residents said they planned to ride out the storm but authorities say many fled at the last minute when Michael gained more force, Mayor Al Cathey said.

Every school in Bay County was damaged, official said.

The future of thousands of students also remains unclear, especially those in Bay County, where schools are closed until further notice.

"It's not going to be a normal school year. There's nothing normal about where we are right now," Bay District Schools Superintendent Bill Husfelt told CNN affiliate WMBB.

With the majority of its 26,000 students displaced and many schools deemed not safe because of the damage, officials are discussing alternative ways to get students back to the classroom or provide psychological aid for them.

"I would say every single school in Bay County has some type of damage, some more extensive than others," said Steve Moss, vice chairman of Bay District School Board. "Some it'll probably take weeks or months to get online. Some it will take years."