Dog dies on United flight after being put in overhead bin, airline confirms

A dog died on a United Airlines flight Monday after being placed in an overhead bin, the airline confirmed to ABC News.

A dog died on a United Airlines flight Monday after being placed in an overhead bin, the airline confirmed to ABC News.

In a Facebook post, a fellow passenger said a mother and her two daughters were boarding the flight with their dog in tow when a flight attendant “insisted” that the dog be placed in the overhead bin.

Family wants answers after dog died on board United flight

"They assured the safety of the family's pet so wearily, the mother agreed," passenger June Lara wrote.

The dog remained in the bin for the three-hour flight and was not given any water, according to Lara.

Upon landing, Lara said the dog was unresponsive. 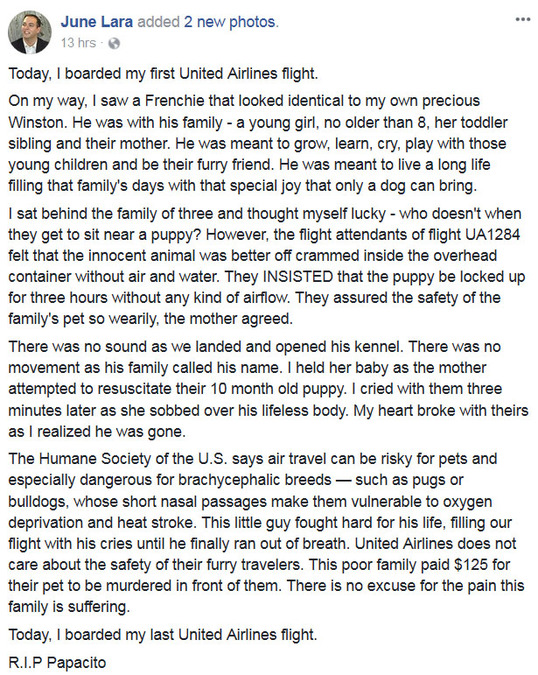 United told ABC News it assumes full responsibility for the dog's death. A spokesperson could not immediately say if anyone has been disciplined in the incident.

“This was a tragic accident that should have never occurred, as pets should never be placed in the overhead bin,” United said in a statement. “We assume full responsibility for this tragedy and express our deepest condolences to the family and are committed to supporting them. We are thoroughly investigating what occurred to prevent this from ever happening again.”

According to Department of Transportation statistics on animal incidents on U.S. carriers, United has the highest rate of incidents involving loss, injury or death of animals during air transportation, with 2.24 incidents every 10,000 animals transported.