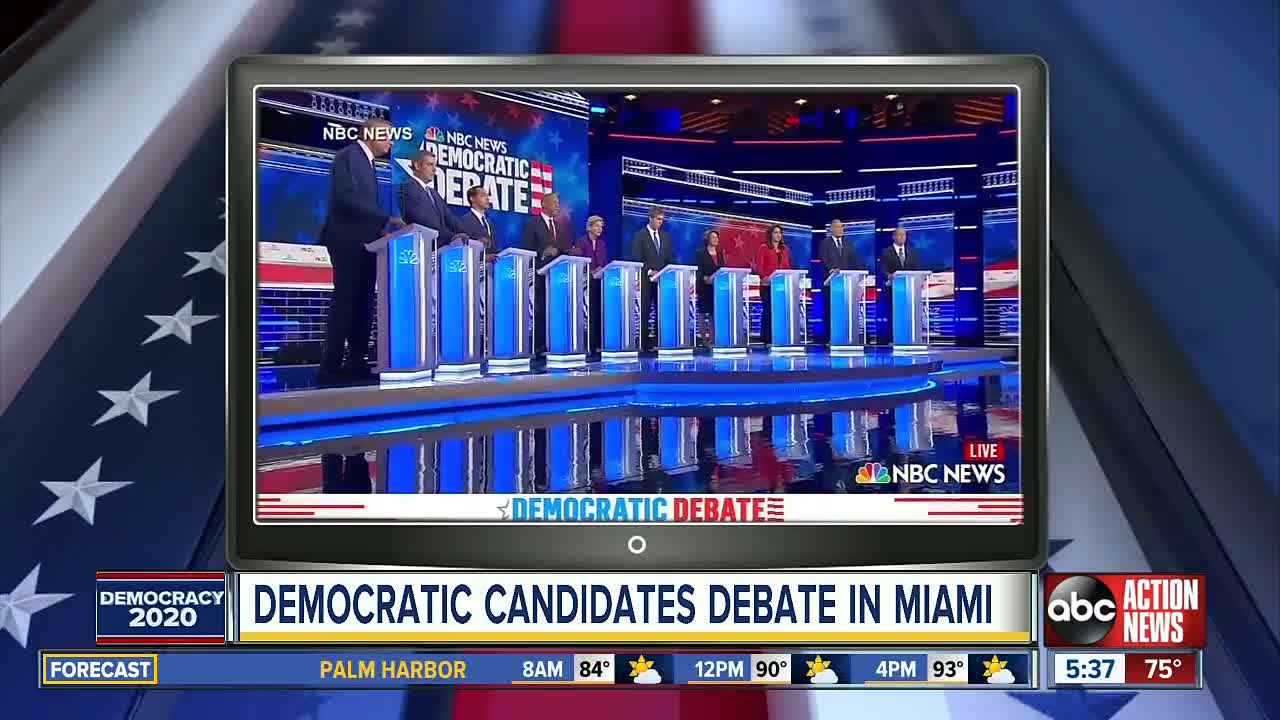 Candidates began heating up the first Democratic debate of the 2020 presidential campaign with jabs at one another. 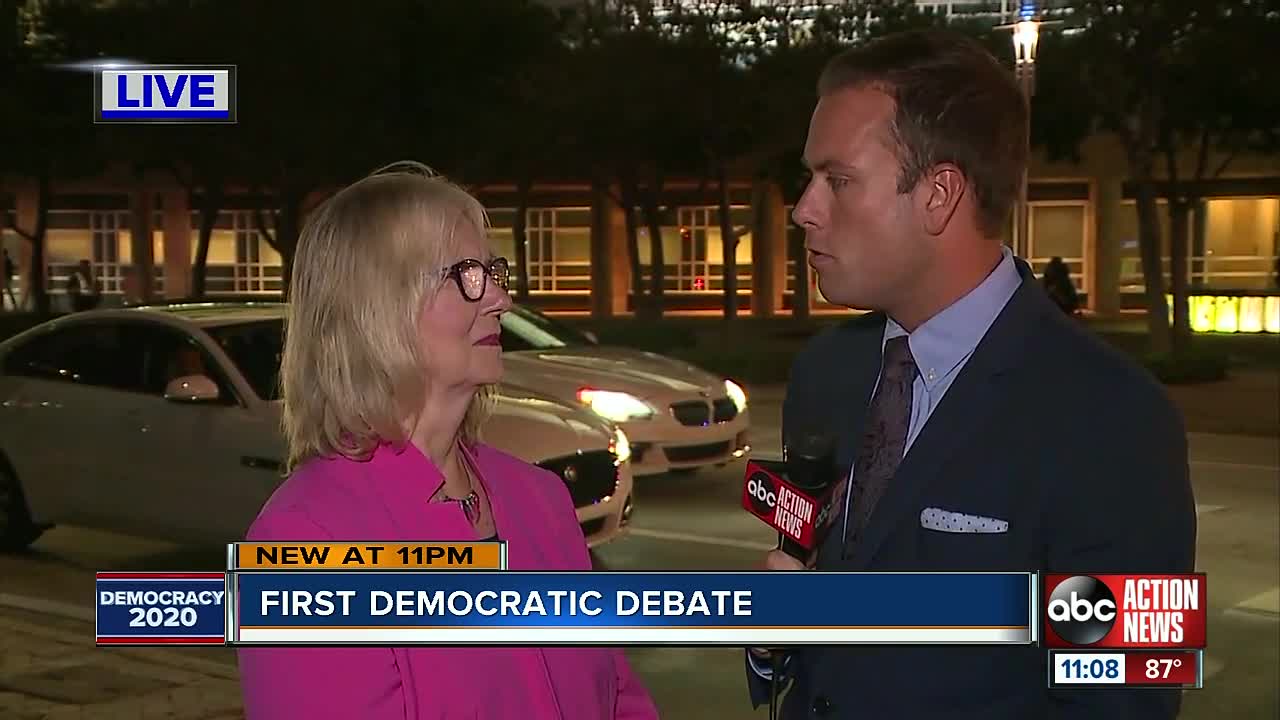 It took a little bit to warm up, but candidates began heating up the first Democratic debate of the 2020 presidential campaign with jabs at one another over immigration and national security.

As the immigration crisis overshadowed Wednesday's presidential debate, the tension between two Texans -- Julian Castro and Beto O'Rourke -- erupted on the stage on Wednesday night as the two tangled over immigration policy.

O'Rourke, the former Texas congressman, was answering a question about what he would do on Day One in office to deal with the migrants seeking asylum, and he referenced the searing photograph of a Salvadorian father and daughter who drowned this week while trying enter the US.

At that moment, Castro, the former Secretary of Housing and Urban Development, began repeatedly interrupting O'Rourke taking issue with his past stance on border crossings until he was admonished by the moderators.

"The reason they are separating these little children from their families is they are using section 1325 of that act, which criminalizes coming across the border, to incarcerate the parents and separate them. Some of us on this stage have called to end that section, to terminate it. Some, like Congressman O'Rourke, have not," Castro said.

"I just think it's a mistake, and I think if you truly want to change the system that we've got to repeal that section," Castro added.

In a pointed jab, Castro went on to challenge O'Rourke's policy depth: "If you did your homework on this issue, then you would know that we should repeal this section," Castro said to O'Rourke.

Later, Hawaii Rep. Tulsi Gabbard and Ohio Rep. Tim Ryan went after each other on their opposing strategies for the war in Afghanistan.

Gabbard, who has had a quiet few months after declaring her run for president, had a stand out moment challenging Ryan's assertion that the United States needs to be engaged in Afghanistan in order to tamp down the threat of terrorism.

"We are no better off in Afghanistan today than we were when the war began," Gabbard said.

Ryan shot back, "I don't want to be engaged. I wish we were spending all this money in places that I'm representing that have been completely forgotten." But he argued that withdrawing all American troops would allow the Taliban to support terrorists that could strike at America.

Gabbard dismissed the idea and said it would be impossible to totally defeat the enemy. "The Taliban has been there long before we came in," she said. "We cannot keep US troops deployed to Afghanistan thinking that we are going to squash this Taliban that has been there that every other country that has tried has failed."

Candidates try to break through with stand out moments

The initial moments of the debate were a time for candidates to deliver the lines they would hope break through the crowded field on the stage.

Klobuchar drew applause when she touted her record working on abortion rights.

"There's three women up here who have fought pretty hard for a woman's right to choose," Klobuchar said to loud applause.

He then reverted back to English for the rest of his remarks.

Former Housing and Urban Development Secretary Julián Castro got a strong response from the audience when he pledged to pass the Equal Rights Amendment. This came in response to a question about what he would do to close the pay gap between men and women. The Equal Rights Amendment is a proposed amendment to the Constitution that would ensure equal rights -- regardless of sex -- to all Americas.

And in the first testy exchange of the debate, de Blasio criticized O'Rourke over the former Texas congressman's approach to health care. O'Rourke had just explained that he backed a plan that would allow Americans to opt into Medicare but preserve a role for private insurance.

De Blasio jumped in, saying, "but private insurance is not working for tens of millions of Americans."

The exchange marked the first clash between de Blasio and O'Rourke -- and demonstrated how candidates tried to use the issue of health care to differentiate themselves.

Former Maryland Rep. John Delaney jumped in on O'Rourke's side. "I think we should be the party that keeps what's working and fixes what's broken," he said.

Inslee got off a zinger early in the debate that hit President Donald Trump by turning to the Washington governor's signature issue: climate change.

Trump "says wind turbines cause cancer. We know they cause jobs," Inslee said to applause.

Trump, whose disdain for wind power dates to his battles with Scottish officials over a plan to build turbines in view of one his golf resorts, suggested earlier this year that the noise from wind turbines "causes cancer."

Warren and her ideas dominated the early part of the debate. The Massachusetts senator was pressed to defend the cost of some of her most expensive ideas -- like forgiving student loans to reduce the debt of college students -- in the very first question of the debate. Moderator Savannah Guthrie noted that more than two-thirds of Americans believe the economy is doing well and could conclude that the change required by some of her ideas could put the economy at risk.

It was an easy opportunity for Warren to deliver her central message that the current tax structure helps the rich, while putting average Americans at a disadvantage.

Klobuchar, who has said that she wishes she has a magic wand to get rid of all student debt but sees that as an unreasonably expensive proposition, was given the opportunity to go after Warren directly in the question that followed. However, the Minnesotan declined the opportunity to go directly after her Senate colleague.

"We know that not everyone is sharing in this prosperity and Donald Trump just sits in the White House and gloats about what's going on when you have so many people that are having trouble affording college and affording their premiums," Klobuchar said. "So I do get concerned for paying for college for rich kids. I do."

"But I think that my plan is a good one, and my plan would be, to first of all, make Community College free, and make sure that everyone else besides that top percentile gets help with their education.... If billionaires out there can pay off their yachts, students should be able to pay off their student loans."

Booker subtly knocked his opponents at Wednesday's debate, faulting the majority of them for not supporting is plan to require a license to buy and own a gun.

Several of the candidates have already visited or intend to visit the Homestead Detention Center to draw attention to the conditions that migrants are facing when they come to the US illegally, which include reports of children being denied basic sanitary supplies like toothpaste, tissues and soap. Other reports, including ones from CNN, indicate children are being forced to sleep on bare floors as older children are asked to take care of younger charges.

The news of those indignities and the public health risks gave Democrats an opening for impassioned critiques of the Trump administration during the debate.

"On Day One, I will make sure that no. 1, we end the (Immigrations and Customs Enforcement) and the Customs and Border policies that are violating human rights," Booker said.

De Blasio pointed to the heartbreaking photo of the father and daughter dead in the Rio Grande and said Americans have to say "this is not America."

"Those are not our values," de Blasio said, in a pointed critique of the Trump administration.

Ryan also took aim at the Trump administration and the conditions of the detention centers in which migrant children are being held.

"What kind of country are we running where we have a President of the United States who is so focused on hate and fear?" Ryan said.

"The end result is we have kids laying in their own snot with three-week old diapers that haven't been changed. We have to tell the President that is not a sign of strength, that is a sign of weakness."

Wednesday's debate will be followed by another showdown on Thursday night. In that debate, Biden, Sanders and two other strong contenders -- California Sen. Kamala Harris and South Bend Mayor Pete Buttigieg -- will take the stage for their matchup.