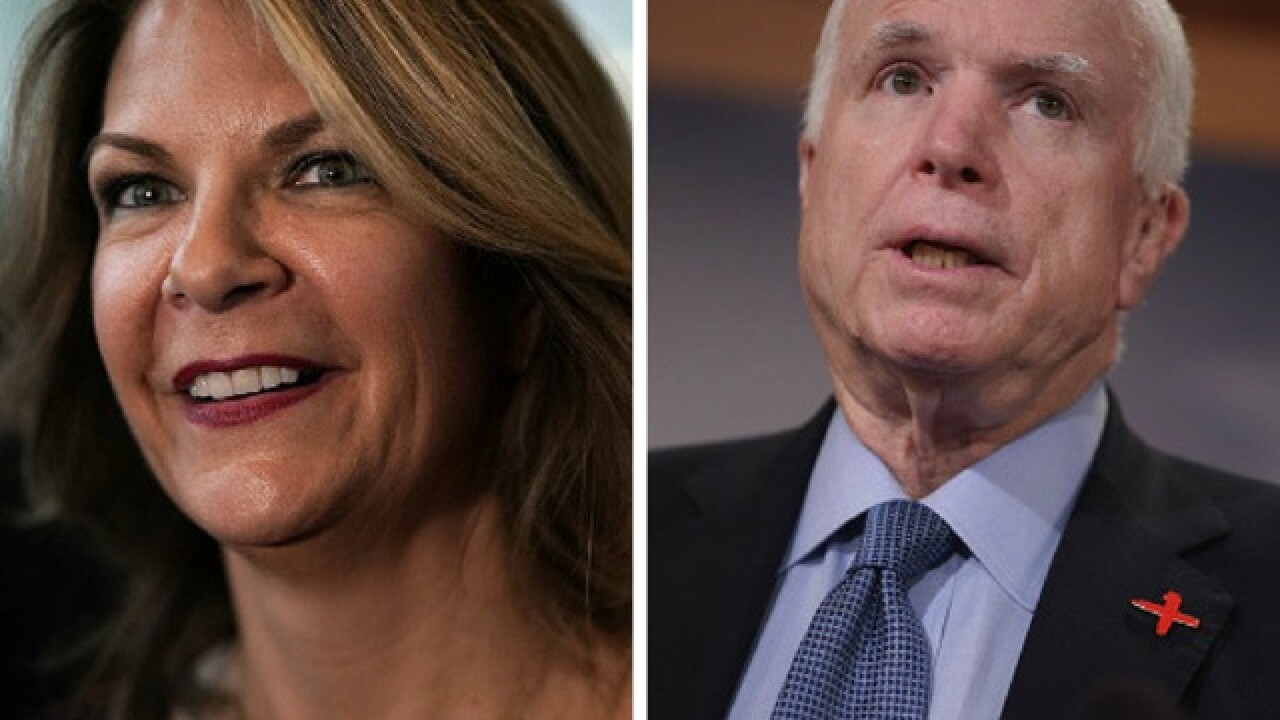 As the nation mourns the passing of Sen. John McCain, Arizona Republicans are holding a Senate primary Tuesday in which one of the candidates suggested the announcement that McCain was stopping medical treatment was timed to hurt her campaign.

Kelli Ward, a former state senator who has courted the far-right during her campaign, suggested on Facebook Saturday that McCain's family released its statement saying the senator was ending medical treatment for brain cancer was timed to hurt her chances of winning Tuesday's primary.

Ward staffer Jonathan Williams posted that he wondered whether McCain's statement was released "to take media attention off" Ward's campaign, which was beginning a statewide bus tour. "I'm not saying it was on purpose but it's quite interesting," Williams wrote.

"I think they wanted to have a particular narrative that they hope is negative to me," Ward responded, according to a screenshot posted by the The Arizona Republic.

On Monday, less than two days after McCain died of brain cancer, Ward tweeted, "Political correctness is like a cancer!"

The attacks and insensitive remarks about McCain are just the latest in a heated primary race that has seen all three candidates align themselves with President Donald Trump, who attacked McCain relentlessly for three years, rather than McCain or retiring Sen. Jeff Flake, whose seat they are seeking to fill.

Their decisions show how the path McCain cut through the Trump era -- breaking with the President on foreign policy, health care, immigration and more -- complicated his relationship with diehard Republicans in a state where the GOP electorate is now demanding fealty to Trump.

McCain fended off Ward's challenge in a 2014 primary. Since then, she's made a series of insensitive comments as McCain battled brain cancer.

She called on McCain to step down last year, calling him old and near "the end of life" before his diagnosis and said afterward he should resign "as quickly as possible."

Ward closed the race barnstorming the state on a bus tour with right-wing media personalities Mike Cernovich and Tomi Lahren, as well as Rep. Paul Gosar.

"Are we going to elect another senator cut from the same cloth as Jeff Flake and John McCain?" Ward asked the crowd at a campaign event Friday, eliciting shouts of "No!"

After McCain's death, Ward tweeted: "We are saddened to hear of the passing of @SenJohnMcCain. His decades of service will not be forgotten by the men & women of Arizona. May God grant the McCain family comfort and peace during this difficult time."

McSally, the Republican establishment's preference in the race, has mostly remained silent on McCain during the primary.

But McSally's omission of McCain's name when touting her support for the National Defense Authorization Act, which was named in McCain's honor, when McSally joined Trump at a signing ceremony at Fort Drum in New York, angered McCain's daughter Meghan McCain.

McSally's "inability to even mention my father's name when discussing the bill named in his honor is disgraceful (just as it was with Trump)," Meghan McCain tweeted. "I had such higher hopes for the next generation of leadership in my home state."

Throughout the campaign, McSally has sought to avoid any distance between herself and Trump.

On Thursday, McSally sought to dodge last-minute controversy that could undercut her primary campaign, repeatedly avoiding reporters' questions about whether she considers Trump honest and trustworthy. The questions came after Trump attorney Michael Cohen's guilty plea and claim that Trump knew about hush payments to alleged mistresses during the 2016 campaign. McSally refused to address Trump, saying only that Cohen was "all over the map, contradicting himself, lying in order to save his ass."

After McCain's passing, McSally tweeted, "John McCain was one of Arizona's greatest Senators, one of our country's finest statesmen, and an American hero who risked his life to defend this great nation. He loved this state, and he loved this country.

"I pray that God comforts Cindy and the entire McCain family. My heart is with them, and Arizona grieves with them."

Arpaio, who was pardoned by Trump last year after being convicted of criminal contempt related to his hardline immigration tactics, complained in a since-deleted tweet on Friday that Cindy McCain had blocked him on Twitter.

"I tweeted out my thoughts & prayers for" McCain, his campaign account tweeted, and Cindy "BLOCKS me on twitter?"

Arpaio tagged Trump and several news outlets in the tweet.