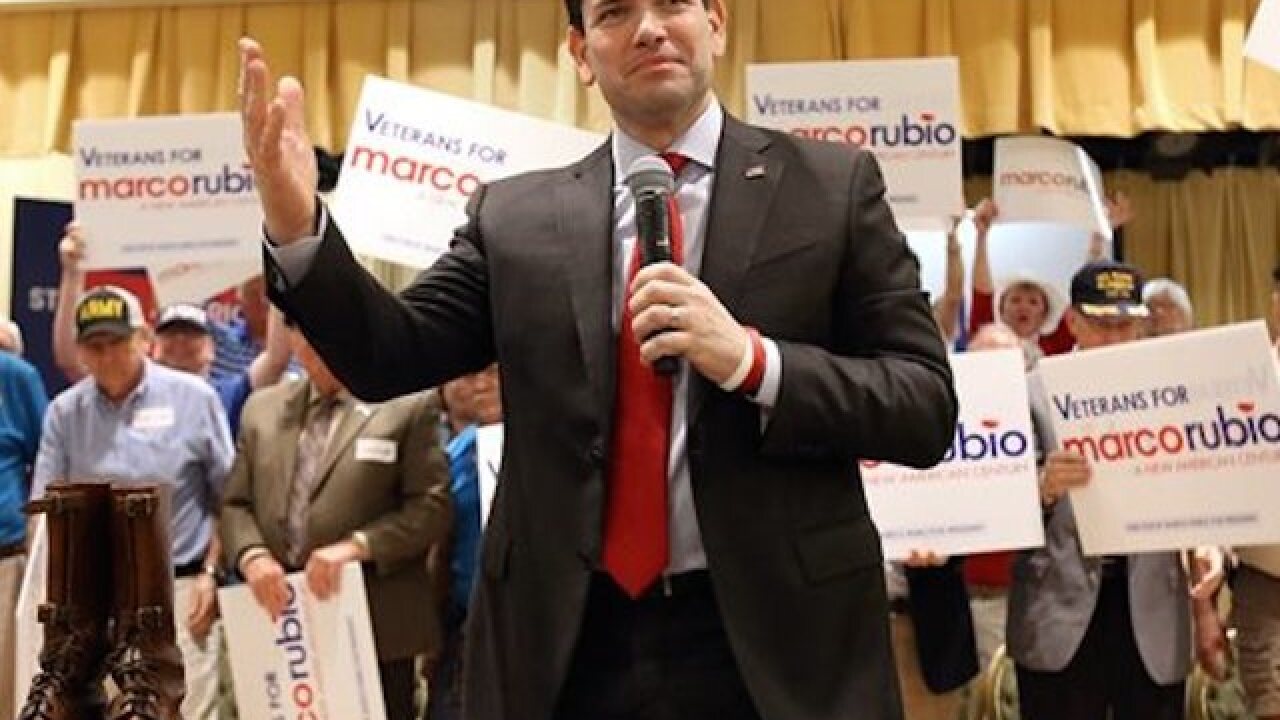 Copyright Associated Press
Bruce ACKERMAN
<p>Sen. Marco Rubio, a Republican Presidential candidate, speaks during a rally with a pair of Gen. George Patton's boots beside him as veterans hold signs at the Rohan Recreation Center in The Villages, Fla. on Sunday, March 13, 2016. (Bruce Ackerman/Star-Banner via AP)</p>

WASHINGTON (AP) — Tuesday's primaries could provide a defining moment in the race for the Republican nomination for president — or not.

So far, Donald Trump has been winning most of the primaries, but he's only been collecting 43 percent of the delegates. That's not good enough to win the nomination. It takes a majority, which raises the possibility of a contested convention with an uncertain outcome.

Trump's rivals are doing worse. The closest is Ted Cruz, who is 90 delegates behind Trump, winning 34 percent of the delegates awarded so far.

Almost every state that has voted so far has awarded delegates proportionally, so that even the losers could get delegates.

But that changes on Tuesday, when party rules say states can start awarding all of their delegates to the statewide winner. Only nine contests are winner-take-all, and three of them are on Tuesday, in Florida, Ohio and the Northern Mariana islands.

People will also vote in Illinois, Missouri and North Carolina.

A look at how different outcomes in Tuesday's races could shape the race for the GOP nomination:

If the GOP front-runner sweeps Tuesday's contests, he will put himself on a path to win the nomination by the end of the primary season on June 7.

He would have to keep winning to pull it off. But he would cross an important threshold by collecting more than 50 percent of the delegates awarded so far.

The big prizes are Florida, with 99 delegates, and Ohio, with 66. The Marianas have only nine delegates.

Also, the winners in Missouri and Illinois could get a large majority of the delegates from those states.

North Carolina awards delegates proportionally, so everybody gets a trophy.

THE HOME-STATE SENATOR AND GOVERNOR WIN

If Marco Rubio wins Florida and John Kasich wins Ohio, their victories would go a long way toward making sure that no one gets the 1,237 delegates needed to lock up the nomination before the convention.

It's already too late for Rubio or Kasich to reach the magic number by June. Rubio has been winning just 15 percent of the delegates, and Kasich has been getting just 6 percent.

But if they could both pull off big wins on Tuesday, they could stop Trump, setting the stage for a contested convention this summer.

Even if Trump were to win the rest of the winner-take-all states — there are only six others — he would still be denied a majority of the delegates.

THE HOME-STATE SENATOR AND GOVERNOR SPLIT

If Trump were to win Florida but lose Ohio, the status quo would prevail, and the race would continue on an uncertain path. Trump would have slightly less than 50 percent of the delegates, but he could jump above the threshold by winning the rest of the winner-take-all states.

The polls say it's unlikely, but if Ted Cruz were to win every state on Tuesday, he would jump into the lead in the race for delegates. However, he would still be short of a majority of the delegates, increasing the likelihood of a contested convention.

Cruz would need to win 61 percent of the remaining delegates to reach 1,237, a big improvement from his current rate of 34 percent.

Cruz would probably need Rubio and Kasich to drop out, and then would need to beat Trump soundly in the remaining contests.