“We were like, okay, we’re going to be married for a year, enjoy being newlyweds and then right at a year stopping birth control,” she said, looking at her husband, Dustin Merritt, with a glint in her eye.

Virginia and Dusty started “trying” right around their one-year anniversary, exactly as they’d planned. Except, things didn’t go as planned.

“Those first few months we knew it was early. Probably the three-month mark is when we were like...hmm, what’s going on,” she said.

They were happy for those announcing births and celebrating babies, but that happiness was muted.

They found themselves staying home more. They were sad. They wanted so badly to be parents.
Virginia’s doctor’s advice was to give it a year before they worried.

They gave it a year while they worried.

There was testing, different conclusions, more testing and more trying.

Three years into their marriage they started seeing specialists, something they later wished they’d done sooner.

They were referred to a reproductive endocrinologist.

They finally had answers, which meant they finally knew what might be needed to get pregnant.

Virginia had endometriosis. A condition in which the tissue normally lining the uterus or the womb grows outside of the uterus. Endo, as it’s often called, is a painful condition which affects about 11% of women. It is known to cause infertility.

Dusty was diagnosed with varicocele, an enlargement of the veins within the scrotum. The condition occurs in about 16% of males. It is usually harmless, but can be associated with infertility. Varicocele can contribute to lower sperm count and decreased sperm quality.

“It’s disheartening thinking that I might be the problem,” said Dusty, glancing at his wife.

They started what’s called intrauterine insemination, or IUI, a fertility treatment involving placing sperm into the woman’s uterus to help with fertilization. The goal is to increase the number of sperm reaching an egg. During this treatment, the woman takes hormone injections.

“You're emotional. You’re already emotional from having to go through this and then you have all of that added on top of it,” said Virginia of the extra hormones from injections.

“It really messes with your hormones. Basically, you feel like you’re pregnant, and maybe more like the harder parts of pregnancy,” she said.

A cycle of IUI is performed once a month at ovulation. It’s done in a clinical setting at the doctor’s office.

“The actual process itself is uncomfortable. They have to insert into your cervix and into your uterus. It’s quick but it’s just not ideal. Not as pleasant as the natural route. It’s awkward with the doctor and the nurse,” said Virginia.

IUI cost the Merritt’s about $1,000 a month and they did three rounds, or three months of treatment, before having success. They were pregnant, and were both nervous for the pregnancy to last.

“It’s hard to be hopeful. At the same time, you have to have hope,” said Dusty about the pregnancy.

Their son Macsen was born happy and healthy. They thought they were done having children, but the urge built over time. They wanted Macsen to have a sibling and they wanted another baby. The desire built in them to the point they started feeling all of the emotions of their earlier attempts.

The couple went through four rounds of IUI, some of them painful and all of them unsuccessful. The cost was about $1,000 a month, which they’d been covering with odd jobs and cuts from other places in the budget. It was decided, the best option for pregnancy was in vitro fertilization, or IVF.

It would have to be IVF

IVF is a much more labor-intensive process, and much more expensive.

An IVF cycle is a series of procedures to assist with conception of a child. Mature eggs are collected from the woman’s ovaries and fertilized with sperm in a lab. Then, the fertilized egg (or embryo) or eggs are implanted in the woman’s uterus. A cycle typically takes two weeks, and depending on personalized details, can cost between $15,000 and $20,000, sometimes more.

Virginia and Dusty weren’t sure how they were going to afford IVF. They were selling their house and knew they’d have some equity from the sale. They worked extra. They saved.

They started making appointments here. They were growing more discouraged, but remained determined.

“We were feeling really lost for a while. Like, how are we going to come up with this money? Are we in the right place? We were frustrated and unhappy,” recalled the couple.

A text from Virginia’s sister one morning changed everything.

“She said, had we considered treatment outside of the US for IVF?”

“I spent the entire day researching medical tourism,” she said, her husband chuckling.

Virginia found the Barbados Fertility Clinic, even emailing them to ask questions. They responded almost immediately.

“She’s looking up all this stuff,” said Dusty, “and then she’s springing it on me, sending me text messages. I get home and she’s like, I’m serious! Look at this, and look at this. Showing me all the research she’d done,” said Dusty.

The couple learned the difference in price was significant. A full round of IVF for everything they wanted here was going to run $23,000 at a local clinic. Total price for IVF in Barbados was to be about $8,300.

The Barbados clinic had a travel guide who helped them figure out details and pricing for travel. Airfare for four (they were taking their older son and Virginia’s mom), a condo for two weeks, a car, and food totaled up to about $10,000. The total trip with everything, including IVF, was to cost them about $18,500.

(Note, the Merritt’s say they were originally quoted $15,000 to $17,000 for IVF in the states, but didn’t know the quote did not include medication. That piece of information significantly changed the financial commitment for which they’d need to be prepared. They share so other couples will know to ask about including that in expenses.)

The decision to go

After more research and more discussions, and further communication with the clinic in Barbados, Virginia and Dusty made their decision. They were going to Barbados.

“Worst case, we have this amazing vacation with our son. Best case, we come home pregnant,” said Dusty.

They did get a little nervous as they were about to go.

“Flying out, it was like, we’re going on a vacation. This is nice. And then it was, okay, we’re going for medical treatment. This has all been built up and it’s all so wonderful. Is it actually going to be what we think it is,” said Virginia, recalling her feelings as they left for Barbados.

The couple was in Barbados for two weeks. The clinic was across the street from the beach; the couple’s condo was a short walk to both. They were there two weeks, and report a very comfortable experience and a wonderful vacation.

They left Barbados unsure if their efforts had worked, although Virginia said anyone struggling with fertility is to act as if they’re pregnant until they know for sure they’re not.

“It’s called PUPO, or pregnant until proven otherwise,” she explained.

Six days after returning from Barbados, Virginia and Dusty found out they were pregnant.

“Oh my goodness! It worked!” she remembered saying.

It was twins. Baby boy, Wells Coen Merritt, was born a few moments before his sister, Isla Lawrence Merritt.

Wells has the distinct honor of being the 2000th baby born with the assistance of the doctors at the Barbados Fertility Clinic.

“I’ve been a qualified gynecologist since 1998, qualified for medicine in 1992,” she said, stating how long she’d been practicing medicine.

She and her staff get inquiries regularly from couples exploring options for fertility treatments, and the clinic is reportedly very quick at responding to questions, something Virginia Merritt told us was a huge plus in her opinion.

Most women want to know success rates, cost, length of time and safety.

Success rates are difficult to verify when dealing with clinics because different variables lead to differing success rates and many clinics choose what’s best to market. It’s important for couples considering IVF to ask questions about their specific circumstances to learn the most likely chance of success.

As for cost, that’s easier to quantify. As mentioned earlier with the Merritt’s, cost in Barbados was about a fourth of what the couple was quoted in the states. A typical stay for treatment is two weeks.

The typical length of a woman’s visit for treatment in Barbados is two weeks, at which time she leaves and will learn if the visit was successful at producing a pregnancy within a week of returning home.

As for oversite and regulation?

“It’s always a leap of faith for someone to leave their home country and go to another country to have healthcare,” said Skinner.

Barbados is a very small island and doesn’t have a regulatory body like the United States does.

However, the clinic is accredited by Joint Commission International, or JCI.

41 Action News reached out to JCI to learn what an accreditation from them entails. Dr. Paul Chang, Vice President, Accreditation, Standards and Measurement, for Joint Commission International, e-mailed back this statement:

“To achieve JCI accreditation, organizations such as Barbados Fertility Centre voluntarily undergo an extensive and rigorous on-site survey every three years and continuous evaluation of their processes, including the assessment of physicians and nurses’ qualifications, care and treatment of patients, anesthesia procedures, safe use of medications and much more."

Some U.S. doctors are skeptical

Dr. Dan Gehlbach, founder of Midwest Reproductive Center, says he just doesn’t know enough about clinics outside of the United States to be comfortable with saying much about traveling for treatment.

“I don’t know the regulation that exists in other countries with medical and especially IVF procedures. 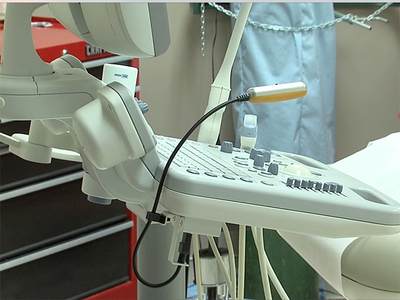 Here in the United States, we are very regulated and our laboratories are inspected regularly. We’re monitored on a regular basis. There are things that we want to hold ourselves to a higher standard,” he said.

He says there are costs associated with that high standard. He’s also concerned about timing.

“For most patients, it’s about a three-month process from when we start to when we’re actually transferring an embryo in them and there are multiple visits and procedures,” said Gehlbach.

Skinner admits most return to Barbados for multiple treatments.

“For most patients, they’re going to be coming to Barbados one to three times, depending on how many times they need to be treated,” said Skinner.

Currently, most insurance companies do not cover infertility treatments.

The Merritt’s say their search for answers was covered by insurance: the appointments, the tests, and the specialists. But when it came time to start reproductive assistance, they were on their own.

According to a just-published document from the National Association of State Legislatures, since the 1980s, 15 states have passed laws requiring insurers to either cover or offer coverage for infertility diagnosis and treatment.

Kansas and Missouri do not have laws mandating health insurance coverage for infertility treatment.

The number of couples choosing IVF, and the methods employed to increase chances for success, are growing.

The Merritt’s chose to share their story in hopes of encouraging others not to give up.

They, along with several other local women, have told us how dark and depressing the inability to have a baby is when every cell in your body wants a baby. They all said they felt very alone during the journey. They want others to know they are not alone.

Several women agreed to share their stories of infertility so if you are struggling you may find comfort in hearing from them.