Chinese space station set to plummet back to Earth, could crash over parts of US

Most of it will burn up on re-entry, but there’s always a chance some of it will survive and hit Earth. That said, most of our planet is covered by water so the odds are overwhelming it will splash down in an ocean someplace.

What goes up, must come down.

Simply put, that's why there's so much interest in Tiangong-1, China's first space station, which was launched in 2011 and has been in decreasing orbit ever since. China admitted last year it no longer had control of the space station –– and now it’s getting close to plummeting back to Earth.

Most of it will burn up on re-entry, but there’s always a chance some of it will survive and hit Earth. That said, most of our planet is covered by water so the odds are overwhelming it will splash down in an ocean someplace.

China is already building another more ambitious space station -- Tiangong-2 was launched in 2016 -- as well as a lunar base, and is ramping up its space program dramatically. The European Space Agency is now sending its astronauts to train in China, since there is so little opportunity with NASA these days. NASA shut down its Space Shuttle Program following the launch of Atlantis in July 2011 and has sent astronauts up to the International Space Station on Russian launches ever since.

The last manned mission to Tiangong-1 was in 2013.

When will it crash back to Earth?

Much depends on angle, velocity and atmospheric density –- but current predictions have it re-entering as early as March 29 and as late as April 2.

What are the odds someone will get hit?

Aerospace Corporation, which tracks space junk for NASA and Space Command, says the odds you will be hit -- even if you are in the highest-probability zones -- are about 1 million times smaller than the odds of winning the Powerball jackpot. The only known person to have been hit by space junk is Lottie Williams of Tulsa, Oklahoma. She was hit, and uninjured, when a used Delta II rocket burned up on re-entry in January 1997.

Who has the highest risk? 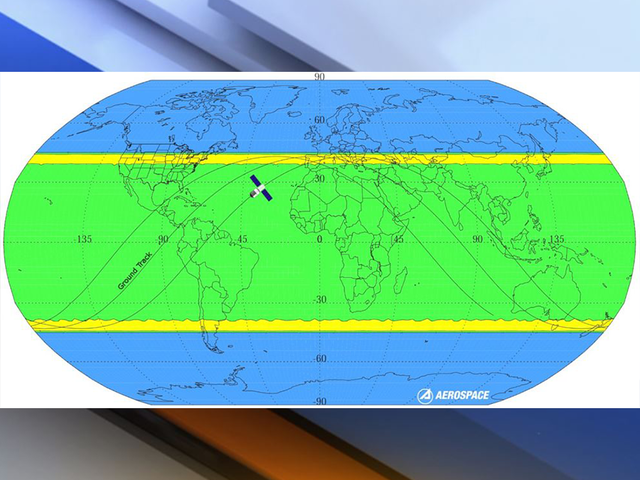 In the U.S., the highest probability of debris impact is located on a narrow horizontal band bisecting the country -- marked in yellow on the map. These areas include Oregon, northern California, parts of Nevada, Idaho, Utah, Colorado, Wyoming, Nebraska, Iowa, Minnesota, Wisconsin, Illinois, Indiana, Ohio, Pennsylvania, New York, New Jersey and Connecticut. Even then, the risk isn’t that high at all.

In Europe, it tracks across Spain, southern France, Italy and onward to China.