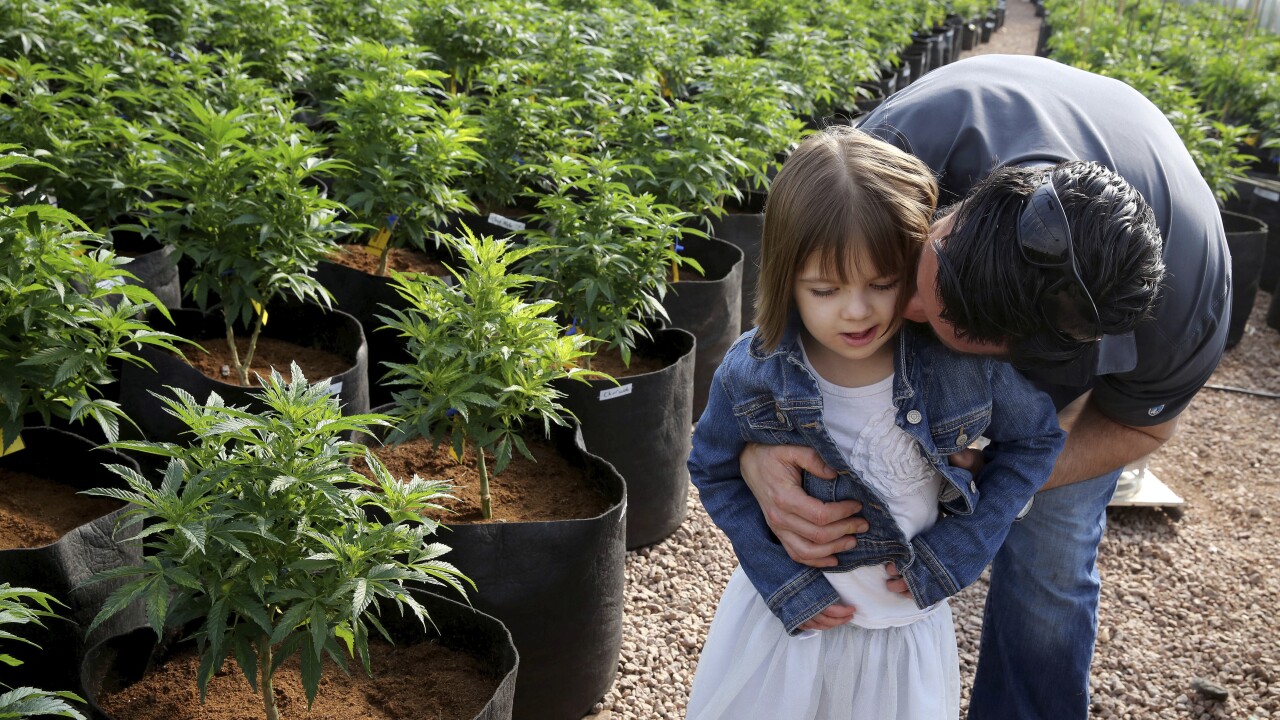 Copyright 2014 The Associated Press. All rights reserved
Brennan Linsley/AP
In this Feb. 7, 2014 photo, Matt Figi hugs and tickles his once severely-ill 7-year-old daughter Charlotte as they walk around inside a greenhouse for a special strain of medical marijuana known as Charlotte&#39;s Web, which was named after Charlotte early in her treatment, at a grow location in a remote spot in the mountains west of Colorado Springs, Colo. (AP Photo/Brennan Linsley, File)

COLORADO SPRINGS, Colo. (AP) — A Colorado girl with a rare form of epilepsy whose recovery inspired the name of a medical marijuana oil that drew families to the state has died.

The non-profit organization co-founded by her mother says 13-year-old Charlotte Figi of Colorado Springs died on Tuesday. It didn't say how she died.

A post on her mother's Facebook page said she was recently hospitalized and a virus had infected her whole family.

“Our entire family had been ill for close to a month starting early March, but did not initially fit all of the criteria for COVID-19 testing. For that reason, we were told to self-treat at home unless the symptoms worsened. Charlotte’s symptoms worsened, so she was admitted to the PICU on April 3,” wrote Paige Figi.

On April 3, Paige says her daughter was tested for COVID-19, but the results were negative and she was discharged on April 5, when she seemingly began to improve. However, Paige says Charlotte had a seizure in the early morning on April 7, resulting in respiratory failure and cardiac arrest.

“Given our family’s month-long history with illness and despite the negative test results, she was treated as a likely COVID-19 case,” wrote Paige. “Her fighting spirit held out as long as it could and she eventually passed in our arms peacefully.”

Before her death, family said Charlotte's seizures and other symptoms caused by Dravet Syndrome largely disappeared after she began taking an oil made with a marijuana strain low in THC.

“Charlotte had a catastrophic form of early childhood epilepsy called Dravet syndrome,” wrote her mother. “We are moved by the continual impact that Charlotte’s life has made shedding light on the potential of cannabis for quality of life."