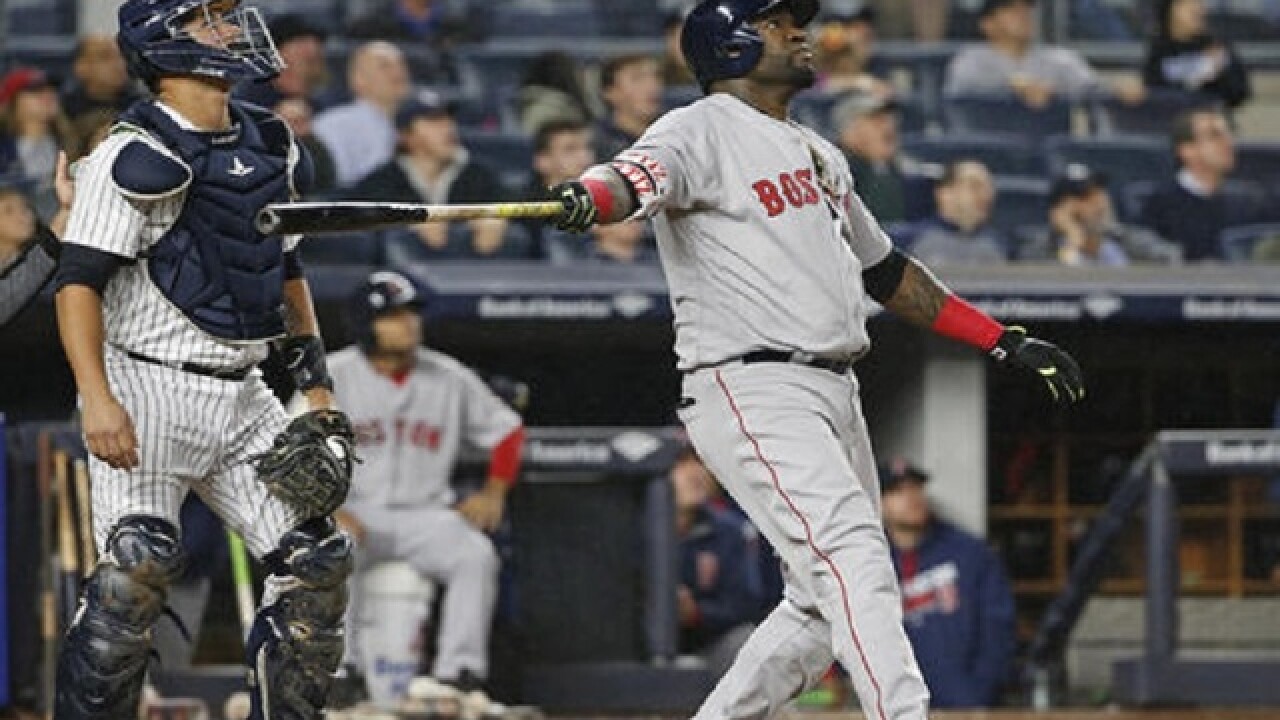 By: Associated Press
Posted at 11:08 PM, Sep 28, 2016
NEW YORK (AP) — The Boston Red Sox won the AL East, clinching the division championship despite wasting a three-run, ninth-inning lead in a 5-3 loss to the New York Yankees on Wednesday night.
David Ortiz and the Red Sox, who last weekend secured at least a wild-card spot in the playoffs, were assured of the division title earlier in the ninth inning when the Baltimore Orioles rallied for a 3-2 win at Toronto. But New York came back against Craig Kimbrel and Joe Kelly.
After winning their eighth division title, the Red Sox will open their postseason schedule Oct. 6 seeking a second World Series crown in four years. The team's first opponent has not been determined yet.
With Ortiz nearing retirement after the season, the Red Sox got to celebrate in the Bronx — the site of so much Boston heartache throughout its storied rivalry with the Yankees.
Of course, there was one glorious moment across the street, when Big Papi and his 2004 teammates overcame a 3-0 deficit to win the AL Championship Series at the old Yankee Stadium. Boston rejoiced and went on that year to capture its first World Series crown since 1918.
But this title will taste sweet as well, especially after the Red Sox completed a worst-to-first turnaround for the second time in five seasons. After winning the 2013 World Series, Boston finished last twice in a row.
This year has become much more than a farewell tour for Ortiz, though. The 40-year-old franchise icon is enjoying one of his biggest seasons at the plate, joined by steady veterans like Dustin Pedroia and Hanley Ramirez mixed with blossoming young stars Mookie Betts, Xander Bogaerts and Jackie Bradley Jr.
"This is a pretty dynamic team in terms of homegrown players at various stages of their career that are coming together to be a very successful team," manager John Farrell said.
Rick Porcello (22 wins) and free-agent prize David Price have solidified the front end of a suspect rotation, with new closer Craig Kimbrel anchoring the bullpen.
Boston took control of a wide-open AL East with an 11-game winning streak — all against division foes — that ended with Tuesday's defeat.
"Above and beyond all, this is a team that cares for one another. And I don't say that loosely," Farrell said. "They're tough, they're focused, they're talented, but, like I said, above all, they care for one another in an extraordinary way."
Farrell, who took over as manager before the 2013 season, enjoyed a personal triumph with this division title as well: He missed the final 1 1/2 months of last season after he was diagnosed with stage 1 lymphoma.
"It's been a journey that makes you relish the good times a little bit more. They're more meaningful," Farrell said. "There's so much to be fortunate or thankful for. ... Clearly, this puts you in a position to reflect on things differently."
The only other time Boston clinched the AL East title away from Fenway Park was at Cleveland in 1988.
Now, the Red Sox hope to reach the World Series again — and set up a potential dream matchup against the Chicago Cubs and former Boston general manager Theo Epstein.
Copyright 2016 The Associated Press. All rights reserved. This material may not be published, broadcast, rewritten or redistributed.