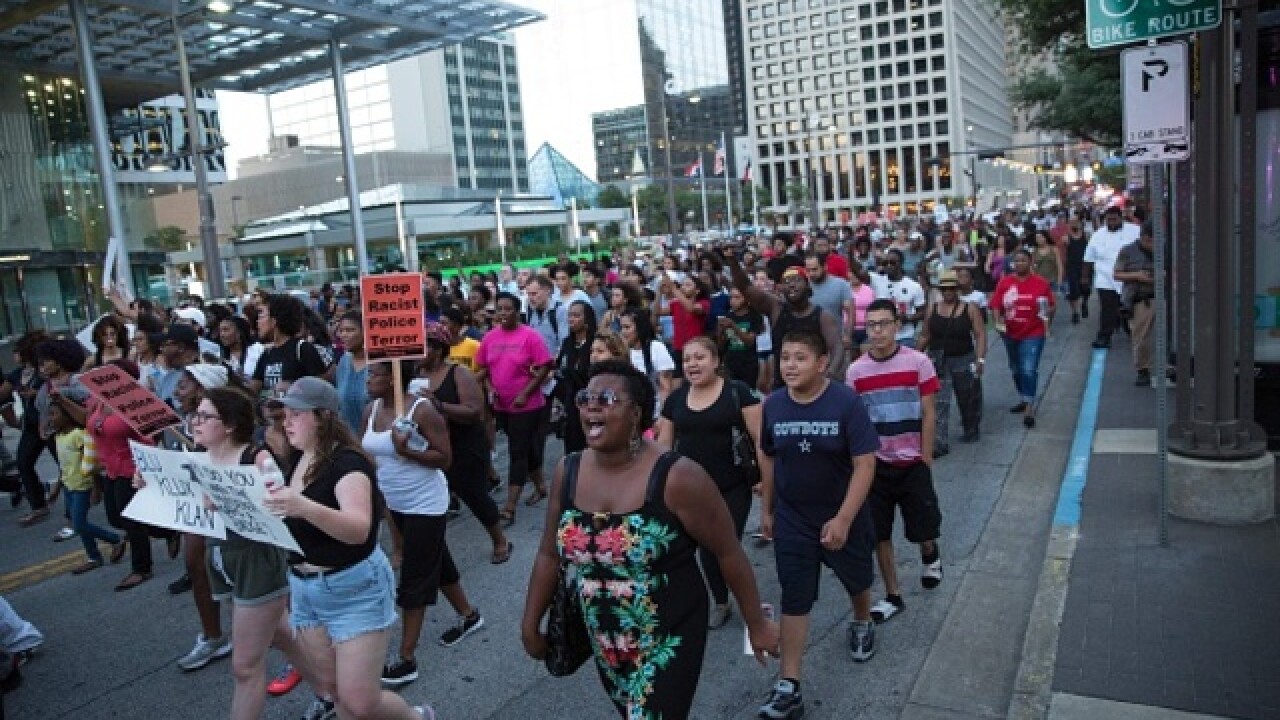 Copyright 2018 Scripps Media, Inc. All rights reserved. This material may not be published, broadcast, rewritten, or redistributed.
LAURA BUCKMAN
People rally in Dallas, Texas, on Thursday, July 7, 2016 to protest the deaths of Alton Sterling and Philando Castile. Black motorist Philando Castile, 32, a school cafeteria worker, was shot at close range by a Minnesota cop and seen bleeding to death in a graphic video shot by his girlfriend that went viral Thursday, the second fatal police shooting to rock America in as many days. / AFP / Laura Buckman (Photo credit should read LAURA BUCKMAN/AFP/Getty Images)

DALLAS (AP) — Supporters of the Black Lives Matter movement on Friday condemned the slayings of police in Dallas but stressed that the shootings should not lessen concerns over the killings of black men and women by officers across the country.

"My heart goes out to the victims of all violence, when we think about what has happened over the past 48 hours," activist DeRay McKesson said Friday during an appearance on C-SPAN.

Authorities say snipers killed five Dallas officers and injured seven others Thursday night during a protest over fatal police shootings of black men this week in Louisiana and Minnesota.

The Black Lives Matter group called the Dallas attack "the result of the actions of a lone gunman."

"To assign the actions of one person to an entire movement is dangerous and irresponsible. We continue our efforts to bring about a better world for all of us," the group said in a statement.

Police officials have identified one suspect, whom they killed but say they're unsure how many people participated in the attack.

The shooting in Dallas came as protesters gathered in reaction to the deaths of Alton Sterling in Baton Rouge, Louisiana, and Philando Castile in a suburb of St. Paul, Minnesota.

Castile was shot Wednesday while in a car with a woman and a child. The aftermath of the shooting was livestreamed in a Facebook video that has been widely shared on social media and broadcast on TV newscasts. A day earlier, Alton Sterling was shot in Louisiana after being pinned to the pavement by two white officers. That, too, was captured on a cellphone video.

The Black Lives Matter movement traces its roots to the fatal shooting of 17-year-old Trayvon Martin in Florida in 2012 and gained national ground after 18-year-old Michael Brown was fatally shot by a white police officer in Ferguson, Missouri, in 2014. Since then, deaths of other unarmed black males at the hands of law enforcement officers have inspired protests under the Black Lives Matter moniker.

"The movement is bigger than any one person or organization," McKesson said Friday. "There are so many incredible activists and organizers pushing to make the world more equitable and just."

The Rev. Al Sharpton's National Action Network appeared to strike a critical tone of the movement in a Friday morning media statement that said Sharpton "reaffirms his commitment that the movement must continue but that it must be anti-police misconduct, not anti-police."

The group rejected the notion that Black Lives Matter is against police.

"This is a tragedy — both for those who have been impacted by yesterday's attack and for our democracy," the group said in a statement. "There are some who would use these events to stifle a movement for change and quicken the demise of a vibrant discourse on the human rights of Black Americans. We should reject all of this."

The statement echoes comments from supporters who took to Twitter in the overnight hours to defend the movement.

"#BlackLivesMatter advocates dignity, justice and freedom, not the murder of cops," wrote Malkia A. Cyril, director of the Center for Media Justice.

"Those protestors were peaceful. This terrorized them too."