Biden tells Harris to 'go easy on me, kid' as candidates spar in early stages 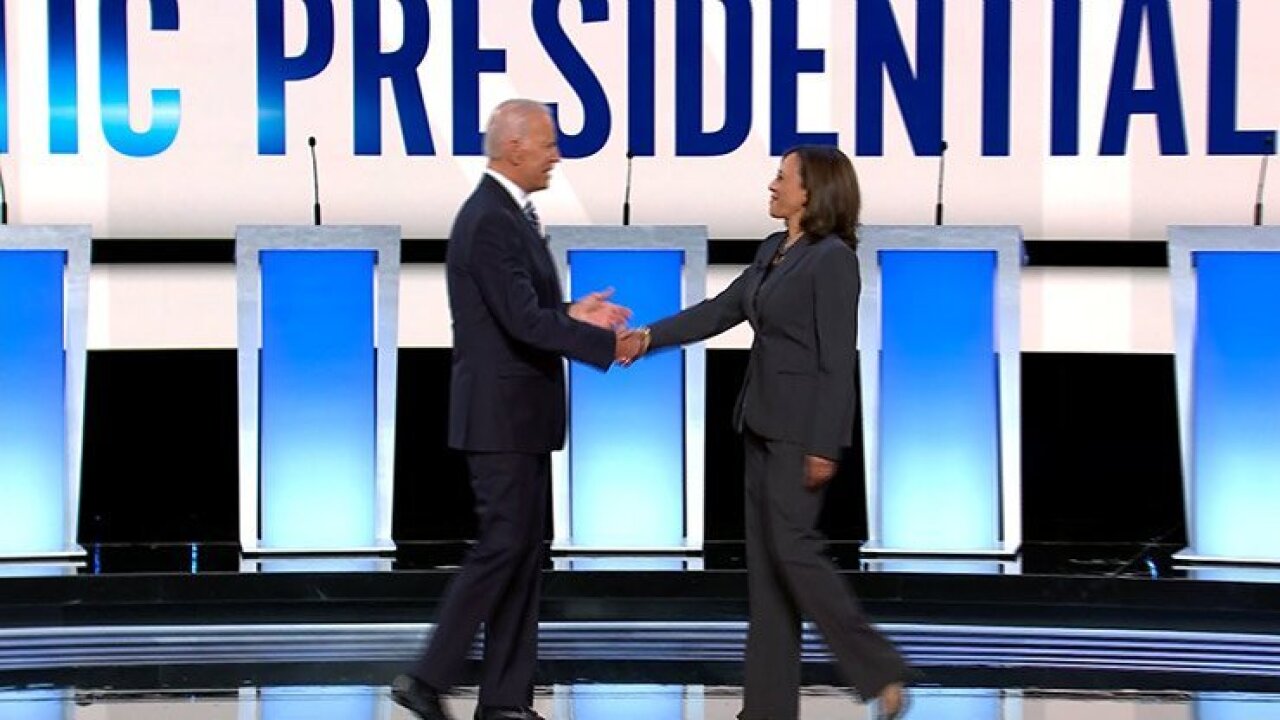 Former Vice President Joe Biden set the tone for his second matchup with California Sen. Kamala harris the moment she walked on stage and shook his hand.

"Go easy on me, kid," he said to Harris as they greeted one another at center stage.

Whether it was a warning shot or simply one of those folksy Biden phrases, it was a signal that he would not be blindsided again the way he was in the first debate when Harris dispatched a fierce attack on his record opposing busing to desegregate schools decades ago. In that exchange, he appeared totally unprepared and caught off-guard. It led many voters to question whether he would be ready to go toe-to-toe against Trump, but his friends and advisers said it was much needed wake-up call.

But Wednesday night in Detroit was different. In his opening statement, he noted that Democrats were "expecting some engagement here."

"I expect we'll get it," he said, before turning his attention to Trump.

"Mr. President, this is America," Biden said, alluding to the diversity of the Democratic field on stage. "We are stronger and great because of this diversity, Mr. President, not in spite of it, Mr. President. So Mr. President, let's get something straight. We love it. We are not leaving it. We are here to stay and we're certainly not going to leave it to you."

Harris, in her opening statement, argued that she too was ready to take on Trump.

"I come from fighters," she said. "My sister Maya and I joke we grew up surrounded by a bunch of adults that marched about this thing called justice and I'm prepared to march with you to fight with you for the best of who we are and to successfully prosecute the case of four more years of Donald Trump. And against him."

Booker, who is hoping for a breakout performance to help him move from the bottom of the pack toward the top tier of contenders, has signaled that he will be trying to show Wednesday night that it is time for fresh leadership and new ideas. Booker's camp has signaled he'll plan to target Biden as well, having previously gone after the vice president over his stances on racial issues and criminal justice.

Fiery debate over the future of health insurance

Immediately, Harris and Biden began to spar over the differences in their health care plans. While Biden would expand Obamacare with the goal of universal coverage but not force Americans to give up their private health insurance, Harris' plan would phase in "Medicare for All" and phase out private insurance over 10 years.

"The senator has had several plans so far, and anytime someone tells you you're going to get something good in 10 years, you should wonder why it takes 10 years," Biden said, alluding to Harris' plan. "If you notice, there is no talk that the plan in 10 years will cost $3 trillion. You will lose your employer-based insurance and in fact, you know, this is the single most important issue facing the public. (To) be very blunt and to be very straightforward, you can't beat President Trump with double talk on this plan."

Harris replied that Biden's description of her plan was "simply inaccurate."

"The reality is our plan will bring health care to all Americans under a Medicare for All system," the California senator said. "Our plan will allow people to start signing up on the first day, babies will be born into our plan and right now 4 million babies, almost, are born every day -- or every year in America. Under our plan we will ensure everyone has access to health care. Your plan, by contrast, leaves out almost 10 million Americans."

Over and over again -- even when responding to criticism from Gabbard -- Harris returned to criticize Biden's plan.

"I'm going to go back to Vice President Biden," she said when given the opportunity to respond to Gabbard, "because your plan does not cover everyone in America by your staff's and your own definition. ... As many as 10 million people will not have access to health care, and in 2019 in America, for a Democrat to be running for president with a plan that does not cover everyone, I think, is without excuse."

At one point, Booker interjected with a plea for unity.

"The person that's enjoying this debate most right now is Donald Trump," Booker said. "We pit Democrats against each other while he is working right now to take away Americans' health care. There is a court case working through the system that will gut the Affordable Care Act. ... I was raised by two civil rights parents that told me to always keep your eye on the prize and that is in the United States of America. Every Democrat should stand with the belief that everyone should have access to health care -- that it's a human right. How we get there, it has to be to end this broken system."