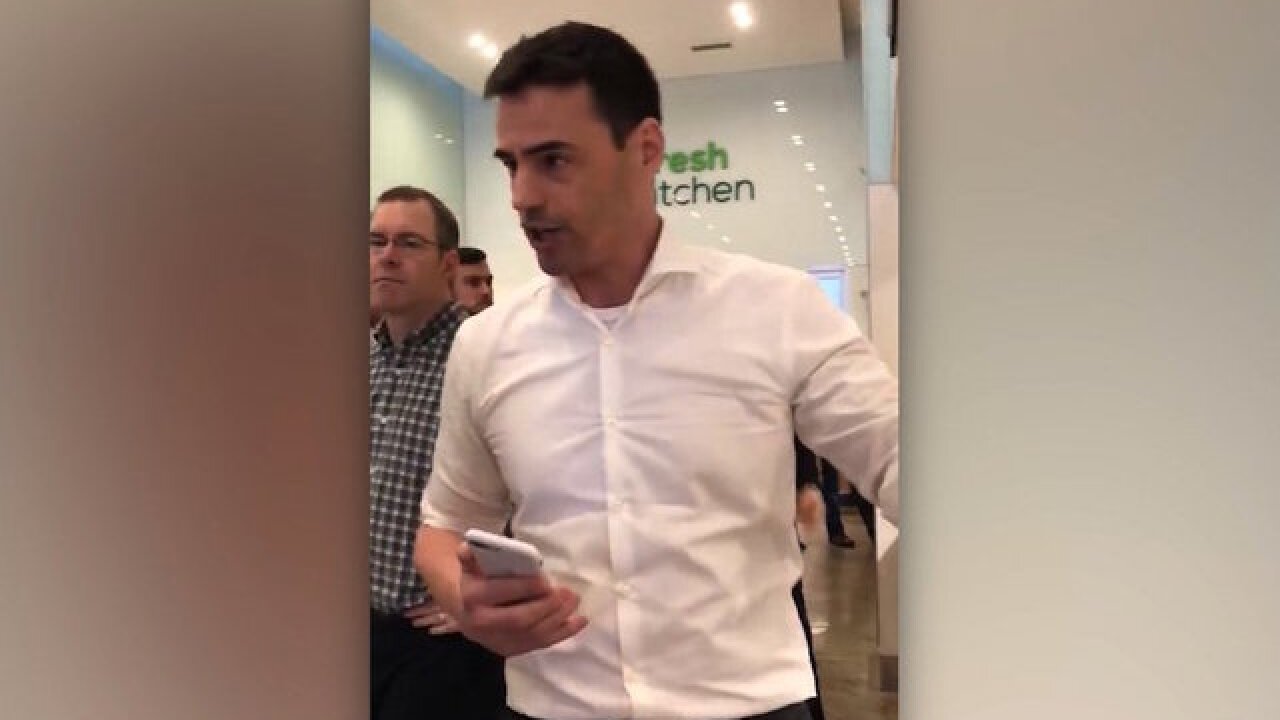 © 2018 Cable News Network, Inc.
Facebook/Edward Suazo
<p>Aaron Schlossberg, an attorney in New York, was identified as the man in a Fresh Kitchen in Manhattan who angrily told employees and customers to speak English because "This is America!"</p>

One week after he screamed at people speaking Spanish in a New York City cafe -- a rant captured on video that quickly went viral -- attorney Aaron Schlossberg says he's not a racist and is "deeply sorry" for his actions.

"To the people I insulted, I apologize," he said Tuesday in a message on Twitter and LinkedIn.

On May 15, a video posted on social media showed Schlossberg at a Fresh Kitchen in Manhattan, angrily telling employees and customers who were speaking Spanish to speak English because "This is America!"

"If they have the balls to come here and live off my money, I pay for their welfare," he says, asserting incorrectly that undocumented immigrants are eligible for federal public benefits. "I pay for their ability to be here. The least they can do ... is speak English."

He continued to express his displeasure to an employee and threatened to call US Immigration and Customs Enforcement officials.

"My guess is they're not documented. So my next call is to ICE to have each one of them kicked out of my country," he says.

Schlossberg, who has been seen on video aggressively confronting strangers on their identity in the past, appeared contrite Tuesday about the Fresh Kitchen incident. He did not mention any of the others.

"Seeing myself online opened my eyes -- the manner in which I expressed myself is unacceptable and is not the person I am," he wrote. "I see my words and actions hurt people, and for that I am deeply sorry."

He wrote that "people should be able to express themselves freely" but "should do so calmly and respectfully."

US Rep. Adriano Espaillat told CNN that he and Bronx Borough President Ruben Diaz Jr. filed a formal complaint against Schlossberg with the New York State Unified Court System, seeking to have his law license suspended until he "amends his actions."

On Thursday, Corporate Suites, the company that operates the business center where Schlossberg has a law office, said it was terminating its agreement with him.

Willie Morris said Schlossberg bumped into him on the sidewalk and called him an "ugly f***ing foreigner" (Morris is from Massachusetts).

Morris said on Tuesday that Schlossberg, through his apology, appears to be trying "to save face."

"I believe he's upset he was caught multiple times being racist and that it's probably been very damaging for him," Morris told CNN.

Morris said Schlossberg will "be more careful about how he acts in public for a while" and that the lawyer should demonstrate his "change of heart" through "actions instead of blanket apologies."

In another instance, Isaac Saul described Schlossberg angrily yelling at an ultra-Orthodox Jewish man who was participating in a protest, accusing him of being a fake Jew. Both encounters were caught on video.

Saul, lead editor for the digital media organization A Plus, saw the Fresh Kitchen video and said he recognized Schlossberg from a previous encounter at a protest outside Saul's Midtown Manhattan office.

On May 25, 2017, Linda Sarsour, an American Muslim political activist, was speaking at a City University of New York graduation ceremony. Saul said there was a protest against Sarsour just outside his office, and anti-Islam activist Pamela Geller and far-right personality Milo Yiannopoulos attended.

Saul also said there were Haredi Jews -- ultra-Orthodox Jews who, in some cases, are stringently opposed to Zionism and the state of Israel -- counterprotesting in support of Sarsour's speech.

Saul said that after the protest ended, he saw some members of the protest "get in the face" of the counterprotesters.