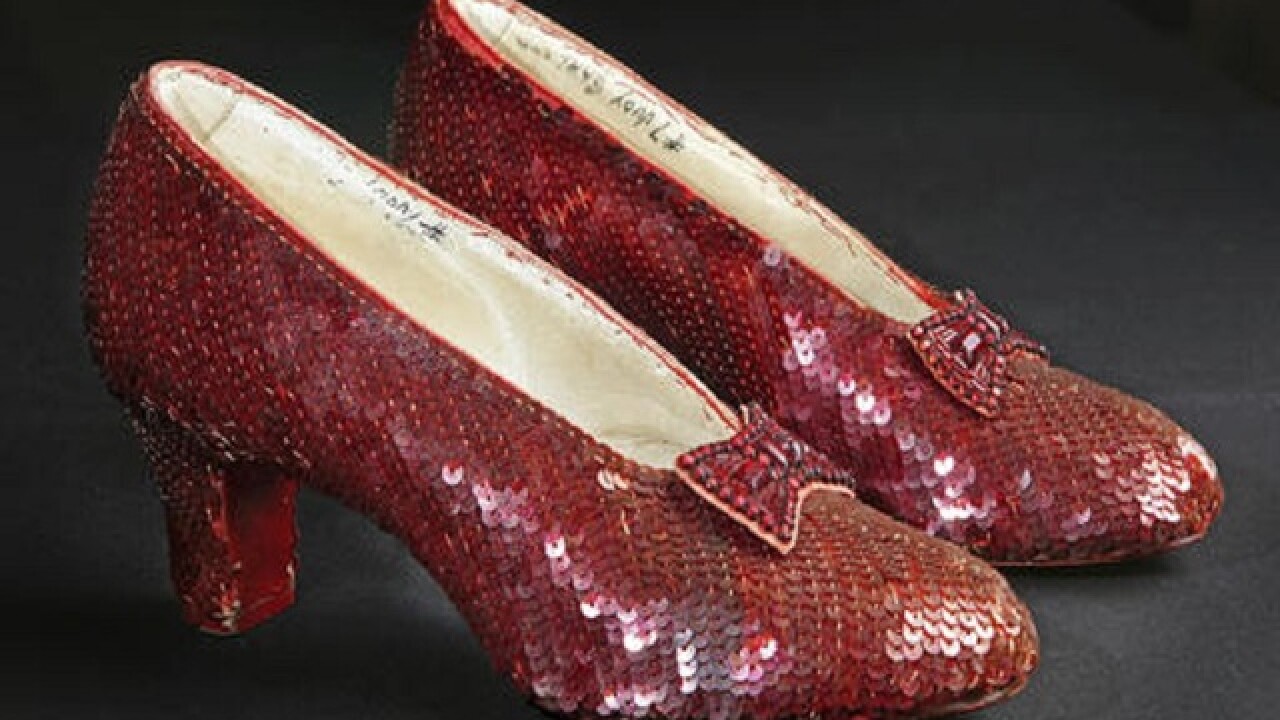 WASHINGTON (AP) — It will take more than three clicks of the heels to preserve the ruby slippers that whisked Dorothy back to Kansas at the end of "The Wizard of Oz."
The slippers, which for more than 30 years have been one of the most beloved items at the Smithsonian's National Museum of Natural History, were crafted almost 80 years ago by the MGM Studios prop department. Like most movie props, they weren't built to last. Now, the frayed shoes aren't even ruby-colored anymore — they're more like a dull auburn.
On Monday, the Smithsonian asked the public to help save the slippers, launching a Kickstarter campaign to raise $300,000. In addition to keeping the shoes' color from deteriorating further, the money will go toward a technologically advanced display case that will preserve them for future generations.
The Smithsonian's museums are federally funded, but the institution frequently solicits private and corporate contributions for major projects that its budget doesn't cover. This is the Smithsonian's second Kickstarter campaign. In 2015, the National Air and Space Museum raised $700,000 through the crowd-funding site to preserve the spacesuit that Neil Armstrong wore when he walked on the moon.
"This particular pair of ruby slippers really belongs to the American people, and so we thought as we sought support that we would invite the public to join us on this journey to help preserve them for the next generation," said Melinda Machado, a museum spokeswoman.
If the Kickstarter campaign is successful, the slippers will be the second-most-researched item in the museum's collection, behind the flag that inspired Francis Scott Key to write "The Star-Spangled Banner," said Richard Barden, the museum's head of conservation.
The shoes are the most recognizable prop for the beloved 1939 musical, their deep red hue dazzling audiences when the movie made its dramatic transition from black-and-white to Technicolor. They have been on near-constant display since they were anonymously donated to the museum in 1979.
Their age is showing, and preserving them is more complicated than it might appear. The slippers contain a dozen different materials. The sequins are made of gelatin with a primitive plastic coating, and many are no longer red because the coating has flaked off, in part because of decades of exposure to light and moisture. The undersides of the sequins, or portions that did not have direct exposure to light, have retained more of their color.
The shoes also include glass beads and red felt on the soles that was used to muffle their sound when Judy Garland wore them during dance sequences.
The pair is also mismatched: One shoe is wider than the other, and there are other subtle differences in their shape. Each has Garland's name written inside.
The museum will research the ideal conditions for the various materials that make up the shoes. The new case is likely to contain a gas other than oxygen, with controls on temperature, humidity and barometric pressure, Barden said.
"That case becomes very expensive to build, and we want to build one that will be efficient and low-maintenance so we're doing the best for the slipper and keeping our costs as low as possible," Barden said.
As of Tuesday afternoon, donors had pledged nearly $80,000 on Kickstarter. If the museum does not reach its $300,000 goal in 30 days, no one will be charged. Donations start at $1 and, depending how much they give, contributors can receive rewards including T-shirts and tote bags created by William Ivey Long, a Tony award-winning costume designer.
Copyright 2016 The Associated Press. All rights reserved. This material may not be published, broadcast, rewritten or redistributed.