A 20-year-old New Jersey man was bound and shot dead while trying to buy a PlayStation for his younger brother, according to authorities.

Danny Diaz-Delgado, 20, of Trenton, was found dead at the embankment of a creek in nearby Hamilton on March 24, according to the Mercer County Prosecutor's Office and a police affidavit.

Diaz-Delgado was shot multiple times in the torso, head and leg, prosecutors said.

A cut power cord was tied around his wrists, which were bound behind his back, and he had duct tape around his neck and mouth, the affidavit said. 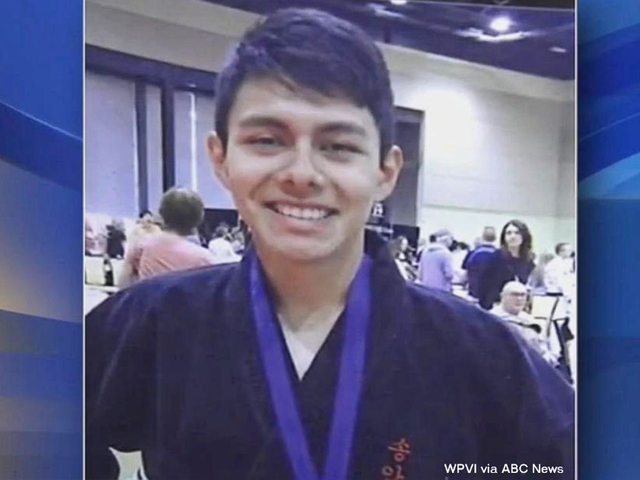 Diaz-Delgado's mother had reported him missing after he never came home on March 23, the affidavit said.

The family told police the 20-year-old left the house on March 23 to buy a PlayStation 4 system and games from separate sellers for his younger brother, the affidavit said. Diaz-Delgado told his family he would come back within an hour.

"We are a poor family and he always fought to better himself," she told WPVI. "He even said, 'One day I will have a lot of money, Mom, and we will never be poor again.'"

"He was a good person who glowed with the love of God," she said. "I want justice because every day it gets only harder to deal with this. Why would anyone do this to a person who never hurt anyone?"

Diaz-Delgado talked over Facebook Messenger with one potential PlayStation seller, identified by detectives as the suspect, Rufus Thompson, the affidavit said.

Police said Thompson withdrew money from Diaz-Delago's account at an ATM on March 23, the affidavit said.

Detectives also recovered pink duct tape, a TV set with the power cord cut off and an empty PlayStation 4 box in a basement where Thompson had been staying, the affidavit said.

Thompson, 29, was arrested Saturday at a friend's house in Trenton, prosecutors said. He was charged with murder, robbery, kidnapping and weapons offenses.

Thompson appeared in Mercer County Superior Court on Monday and entered a plea of not guilty. The prosecutor’s office filed a motion to have him detained and a judge scheduled his detention hearing for Thursday.