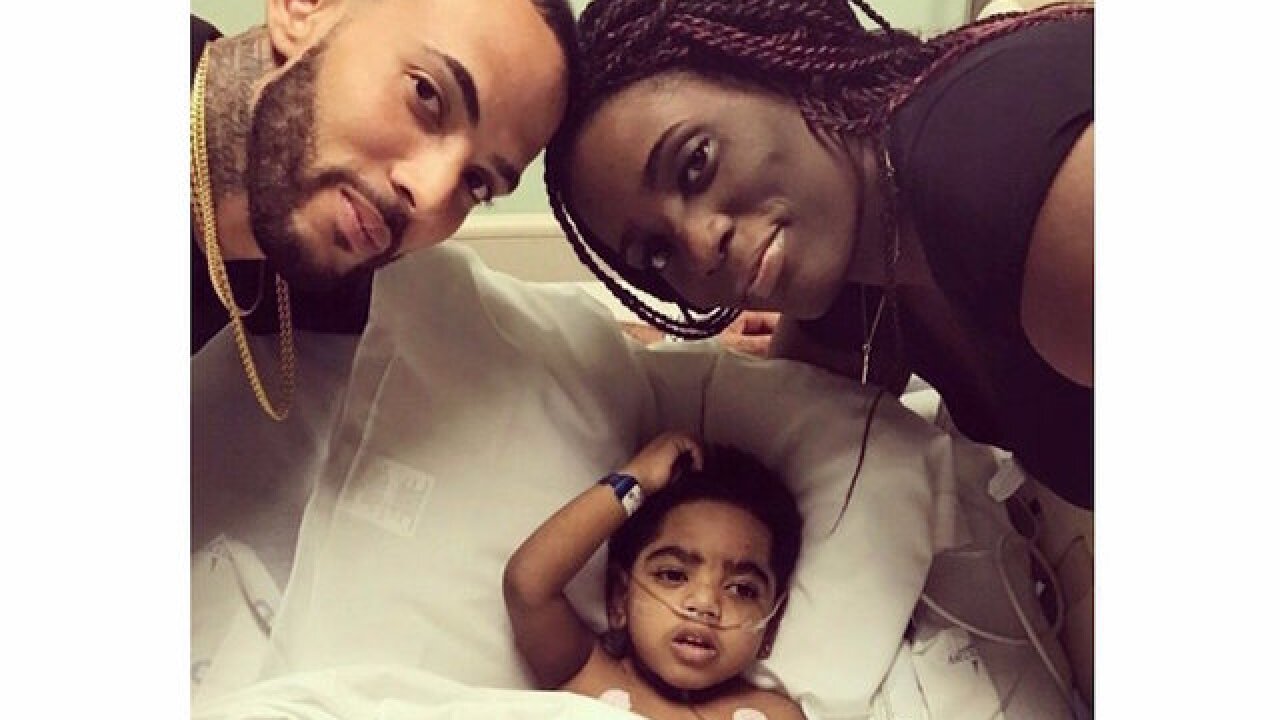 Two-year-old AJ Burgess received a new kidney Wednesday after a prolonged battle with hospital officials who postponed his original October surgery when his father, a perfect donor match, violated his parole and was arrested.

"This is an unexpected Thanksgiving miracle," family attorney Muwali Davis said while the baby was in recovery at Children's Healthcare of Atlanta at Egleston. "To watch this child that no one expected to live, and now for him to have a chance at a healthy life, it's unbelievable.

"His parents and family are overwhelmed with gratitude," Davis added. "They want everyone to know that with faith, all things are possible. When the situation was very bleak, it was their faith and the support of the community that pulled them through this."

According to AJ's mother, Carmellia Burgess, the boy was born prematurely without working kidneys. On a GoFundMe page Burgess established, she says AJ's father, Anthony Dickerson, was "found to be a perfect match" and volunteered to donate one of his kidneys.

Emory Healthcare in Atlanta was set to remove Dickerson's kidney on October 3, according to Burgess, and soon after, AJ would undergo the transplant at Egleston.

But on September 28, Dickerson was arrested for a parole violation, accused of being in possession of a firearm while fleeing and eluding police.

He was released five days later and expected to report for surgery the following day, Davis said, but the family was told the surgery was canceled. The reason, Davis told CNN, is that Emory required proof that Dickerson had complied with parole for 90 days, effectively postponing the baby's transplant until January.

But his son would not make it that long, Burgess said. "AJ's spirit is strong but his body is not," she wrote on the GoFundMe page.

"I love him," Burgess said tearfully on HLN. "I just hate to see him going through this."

In an earlier statement, Emory Healthcare CEO Dr. Jonathan Lewin said that "the national guidelines for approving a potential organ donor are clear and stringent. When evaluating any potential donor, Emory's medical team is required to consider the ability of the donor to manage the many complications and health challenges that come with a major surgical procedure."

Davis said at the time that Emory's justification for denying the transplant was that the hospital wanted to be sure Dickerson would be in a position after the procedure to adhere to the after-care requirements for living donors.

"Everybody understands that," Davis said, "but nobody can make any guarantee about what happens to a donor when a donation is made. His parole probation status should not, as far as we're concerned, be a factor at all."

On HLN, Dickerson said that "I don't see why they think it would be a problem for me to try to treat myself after I do the transplant," adding that he would do everything the hospital required.

Emory had previously concluded that Dickerson "would comply with any and all after-care requirements," according to Harold Spence, another family attorney.

After activists from Emory's Candler School of Theology began protesting the hospital's decision, Davis said, Emory officials began to work with the family to find a solution. That culminated in an early morning phone call from the hospital's transplant team the day before Thanksgiving.

"The transplant team contacted them and said, 'We have a kidney,' so they scrambled down here for the last-minute tests that had to be done," Davis said. "The family arrived about 5 a.m. for those tests, and the transplant team took baby AJ back at 7:30 a.m."

The operation at Egleston took three hours, according to Burgess' Facebook video, and then came the best news: AJ's new kidney was already making urine.

"The surgeons came out and told us of this great news," Davis said, "and hugged the family. It was a very emotional moment to see something that we had hoped and prayed for ... come to fruition. It was an overwhelming moment."

AJ will remain in the hospital for another week before returning home, Davis said. The family plans to "celebrate Thanksgiving in the hospital with him and his new kidney" and asked for privacy during this time of adjustment.

"They are planning a meet-and-greet in January for AJ's third birthday" to thank the community, Davis said, adding that AJ's parents are encouraging people to sign up as kidney donors so another family can be "blessed with the gift of life as their son has been blessed."