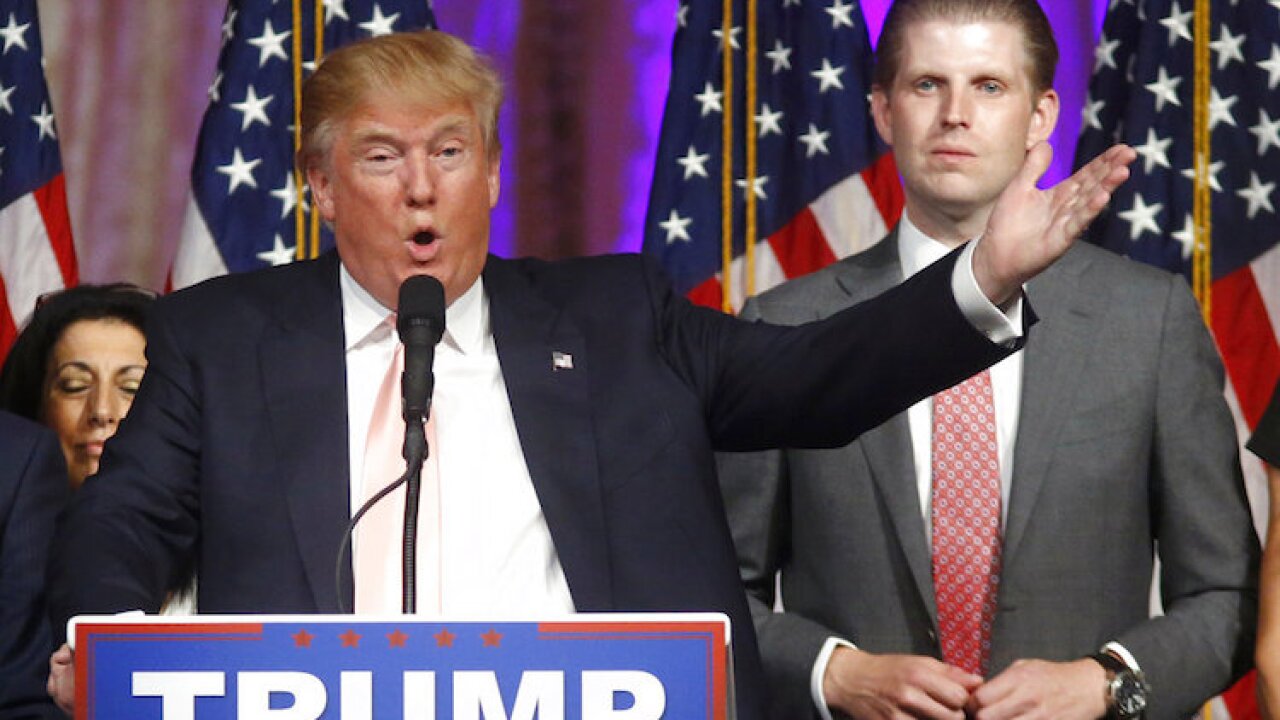 Gerald Herbert/AP
FILE - In this Tuesday, March 15, 2016, file photo, Republican presidential candidate Donald Trump speaks to supporters at his primary election night event at his Mar-a-Lago Club in Palm Beach, Fla. At right is his son Eric Trump. Hits to President Donald Trump’s business empire since the deadly riots at the U.S. Capitol are part of a liberal “cancel culture,” his son Eric told The Associated Press on Tuesday, Jan. 12, 2021, saying his father will leave the presidency with a powerful brand backed by millions of voters who will follow him “to the ends of the Earth.” (AP Photo/Gerald Herbert, File)

The Trump Organization is under city contract to operate the two ice rinks and a carousel in Central Park and a golf course in the Bronx.

According to de Blasio, the City is looking to terminate contracts with the Wollman and Lasker skating rinks at Central Park and the Ferry Point Golf Course.

De Blasio says the Trump Organization profits about $17 million a year from those sites.

“The President incited a rebellion against the United States government that killed five people and threatened to derail the constitutional transfer of power," de Blasio said in a press release. "The City of New York will not be associated with those unforgivable acts in any shape, way, or form, and we are immediately taking steps to terminate all Trump Organization contracts."

According to the press release, the carousel is currently closed, and termination of that contract would go into effect 25 days after the City's termination notice is received.

The City would terminate the agreement for the two ice rinks in Central Park after 30 days' written notice, de Blasio stated in the media release.

The mayor added that process for terminating the contract for the golf course is more detailed “and is expected to take a number of months.”

According to de Blasio, a contract can legally be terminated by the City if a company's leadership is engaged in criminal activity, The Associated Press reported.

A Trump Organization spokesperson said the City can't cancel the contracts and the company will "fight vigorously."

It is the latest example of how the Jan. 6 breach by violent Trump supporters is impacting the Republican president's business interests.

On Sunday, the PGA announced that they are moving the PGA Championship from Trump's golf course in New Jersey next year.

Germany's biggest bank, Deutsche Bank, decided not to do business with Trump and his company, to who he owes more than $300 million, which is set to be due in the next coming years.