Inside the Trump-Kim summit collapse 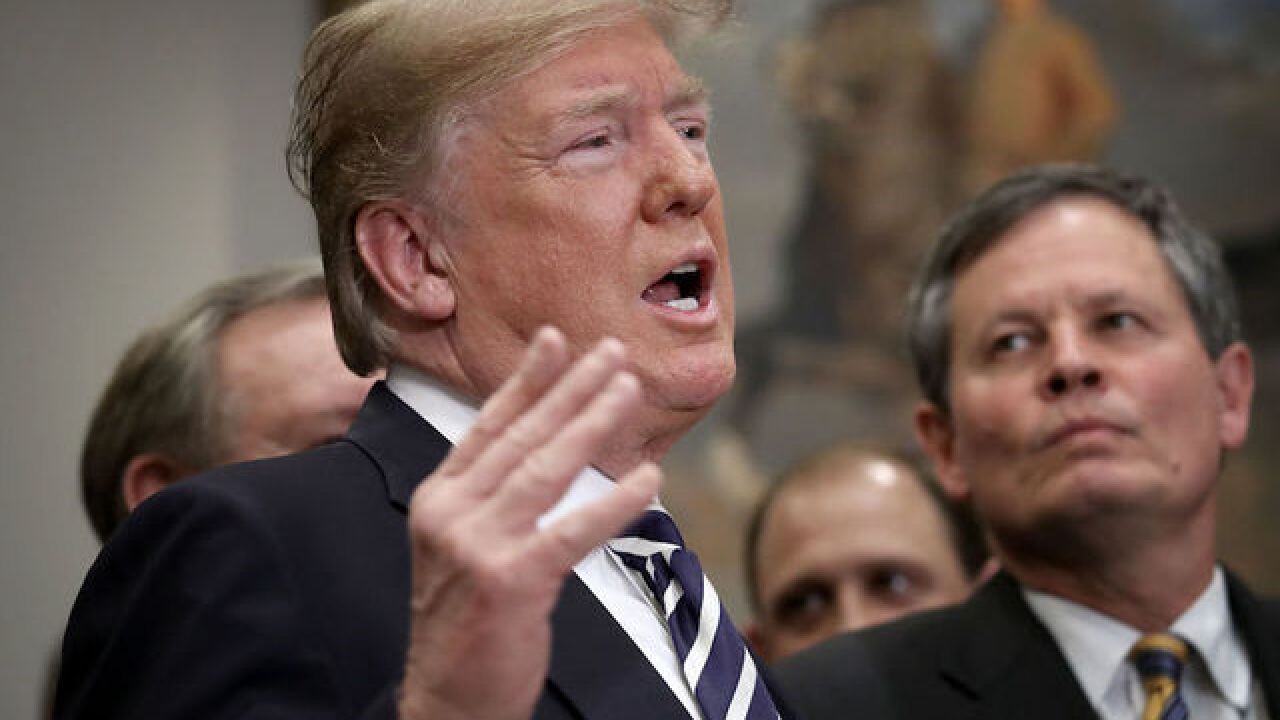 Image copyright 2018 Getty Images. All rights reserved. This material may not be published, broadcast, rewritten, or redistributed.
Win McNamee
<p>President Donald Trump speaks about the cancelled summit with North Korean leader Kim Jong-un during a bill signing ceremony in the Roosevelt Room of the White House May 24, 2018 in Washington, DC. Trump cited "tremendous anger and open hostility" toward his administration by North Korea as a reason for cancelling the proposed summit. </p>

The sun was setting, dinner was waiting and President Donald Trump was making the short walk to his private residence when, on March 8, he suddenly made a detour to the press briefing room.

Peeking through a half-opened pocket door, Trump caught the eye of a small handful of reporters and drew them closer.

"South Korea's going to be making a major statement at about 7 o'clock," Trump said coyly. Vice President Mike Pence stood silently behind him.

"About what?" a puzzled reporter asked.

"The big subject," Trump replied, his scowl turning into a grin. "North Korea."

It was an eager beginning to a diplomatic opening that appeared to close on Thursday. In a one-page letter to Kim Jong Un, Trump called off the summit they'd scheduled for June 12 in Singapore, declaring it a "tremendous setback." He bemoaned Pyongyang's recent turn to "tremendous anger and open hostility." And he renewed his boasts of America's nuclear weapons, which he called "so massive and powerful that I pray to God they will never have to be used."

"Our military, which is by far the most powerful anywhere in the world -- that has been greatly enhanced recently, as we all know -- is ready as necessary," he said later from the Roosevelt Room.

For Trump, the cancellation amounts to a vanished opportunity to secure a historic foreign policy accomplishment midway through his first term as President, a prospect that enamored him even as top officials remained wary. It also ends, for now, the storm of global anticipation for what would have amounted to a landmark diplomatic encounter between two truculent leaders.

At the heart of the diplomatic collapse, according to more than a dozen administration officials and others familiar with the matter, was Trump's own thirst for a legacy-making breakthrough -- one he came to believe could even secure him a Nobel Prize.

A self-declared dealmaker in chief, Trump remained squarely focused on the summit's spectacle, even as he avoided in-depth briefings about North Korea's nuclear program, the officials said.

Ultimately, a barrage of harsh statements from the North and questions about Pyongyang's commitment to denuclearization threw into sharp relief Trump's vague objectives for his encounter with Kim, and the risk of moving forward. The final straw, officials said, was a Wednesday statement from the North railing against Pence and threatening nuclear war.

"The summit could have never worked under these circumstances," a senior US official said.

Trump drafted his letter to Kim early on Thursday morning as he consulted by phone with top aides, including national security adviser John Bolton, Secretary of State Mike Pompeo and Pence. In a tweet, he revealed his chagrin.

"Sadly, I was forced to cancel the Summit Meeting in Singapore with Kim Jung Un," he wrote, misspelling Kim's name.

It was a distant cry from the grinning Trump who teased the announcement in March -- his first and only time in the White House briefing room. Aides said then that Trump accepted the invitation to meet with Kim on the spot, even as firm details of what the North Koreans were offering remained vague. Perched on a gold brocade couch in the Oval Office, Trump dispatched a top South Korean envoy to a darkened White House driveway to make the announcement.

The official, Chung Eui-yong, insisted North Korea was "committed to denuclearization" and understood that joint US-South Korea military exercises would continue. But those commitments appeared in doubt as the US began preparatory talks for the summit using intelligence channels established by the CIA, and Pompeo made two secret trips to Pyongyang.

US officials grew increasingly wary about the seriousness of North Korea's commitment to denuclearization in recent weeks, sources familiar with the discussions said. The concerns were compounded in recent days by silence from the North Korean side, including a meeting where top North Korean officials failed to appear, according to a senior US official.

"Over the past many days we have endeavored to do what Chairman Kim and I had agreed -- put teams, preparation teams, together to begin to work to prepare for the summit," Pompeo told the Senate Foreign Relations Committee on Thursday. "We had received no response to our inquiries from them."

During his two visits to Pyongyang, Pompeo urged North Korea to take concrete actions toward denuclearization, the sources said. While the North Koreans were eager to discuss the logistics of the summit, they did not signal a readiness to take any concrete steps to negotiate away their nuclear weapons.

The President's eagerness to strike a historic deal was on full display during an overnight ceremony earlier this month at Joint Base Andrews as he dramatically welcomed three American prisoners released from North Korea. Asked directly why he believed Kim was ready to negotiate on his prized nuclear arsenal, the President didn't hesitate.

"I really think he wants to do something and bring the country into the real world," Trump said. "I think that we'll have a success. I think this will be a very big success."

Even in the wake of the saber-rattling North Korean statements, Trump continued to offer his unvarnished thoughts. He made clear the summit was up in the air and revealed that he was rattled by the rapprochement between China and North Korea, which he blamed for North Korea's hardened stance.

He also made no secret of his eagerness to salvage the summit, suggesting he was willing to mollify his stance in trade negotiations with China if it meant securing Beijing's support on the North Korean front.

"When I'm thinking about trade -- you know, I read you folks and you say, 'Well, why does he' -- there's a much bigger picture that I have in mind," Trump said. "I'm also thinking about what they're doing to help us with peace with North Korea. That's a very important element. So we'll see how it all works out."

But in diplomatic channels, skepticism remained.

US officials interpreted Kim's reticence as reflective of lingering concerns over the summit, including his transport options to Singapore, a 6,000-mile round trip from Pyongyang. His fleet of Soviet-era aircraft is untested on long journeys, and the heavily armored train he rode to Beijing in March wasn't an option. He also harbored fears of being deposed should he leave his country for long, leading to an insistence the summit take place in North Korea's capital.

That was a non-starter for Trump's aides, who demanded the location be viewed as neutral. Sites in Europe and Asia were considered, and officials believed they'd settled on Singapore, when Trump in April unexpectedly raised the prospect of meeting along the fortified border between North and South Korea.

"Would Peace House/Freedom House, on the Border of North & South Korea, be a more Representative, Important and Lasting site than a third party country? Just asking!" he wrote.

To his aides, it was a sign the optics of the summit were of paramount importance. Kim had just met along the Demilitarized Zone with President Moon Jae-in of South Korea in a pageant-filled moment broadcast live on television. Trump, according to officials, wanted something similar -- and was assured Singapore could provide a suitable backdrop.

Advance teams in Singapore were scouting hotel ballrooms -- including at the ornate Shangri-La hotel -- as possible locations. The White House's top logistics official, deputy chief of staff Joe Hagin, was deployed to Singapore this weekend to finalize details with North Korea counterparts. And commemorative coins featuring Trump and Kim gazing toward each other were stamped to mark the occasion, though Trump's aides said they'd played no role in their production.

But even as those details were coming together, the substance of the talks was becoming less clear. In harshly worded statements, North Korea threatened to pull out of the summit, balking at US demands for "unilateral nuclear abandonment." In statements, the regime appeared to attempt driving a wedge between senior US officials, including going after Bolton when he suggested the so-called "Libya model" could be used on North Korea -- despite the ultimate fate of Moammar Gadhafi, who was killed by rebels in a US-backed uprising less than 10 years after relinquishing his nuclear weapons.

Still, Trump publicly maintained over the last week that he believed Kim was "serious" about denuclearization as the US continued to work toward the summit. And in the hours before his letter to Kim was made public, he appeared in an interview to shift toward a "phase-down" mode of denuclearization instead of the immediate abandonment he'd insisted upon.

Even after the talks were officially scrubbed, the President appeared open for reconciliation.

"If and when Kim Jong Un chooses to engage in constructive dialogue and actions, I am waiting," he said.