A Michigan man has confessed to killing his wife the same day she was set to meet with a divorce attorney, officials said.

The suspect, who has not yet been identified pending an arraignment scheduled for Wednesday, went to his sister-in-law's home on Monday morning and “indicated that she was dead,” Cmdr. Michael Johnson of the Oakland County Sheriff’s Office told ABC News.

The sister-in-law's husband then went to the home and discovered the wife's body lying on a blood-covered couch and called police, Johnson said.

After leaving his sister-in-law's home, the suspect drove himself to a Meijer’s grocery store in nearby Warren, bought a soda and a banana, and sat in his vehicle in the parking lot for a bit before driving himself to the Rochester Hills’ substation of the Oakland County Sheriff’s Office and turning himself in, Johnson said.

“He walked to the front desk, handed them his driver’s license and said, ‘I just killed my wife,’” Johnson said.

RECOMMENDED: Police: Florida teen killed 1, stabbed 2 others at sleepover because 'of his Muslim faith'

The wife had left the house on Monday morning and returned home, where she was shot twice by her husband, Johnson said, adding that investigators have not yet determined if she met with the lawyer she was scheduled to see on Monday. 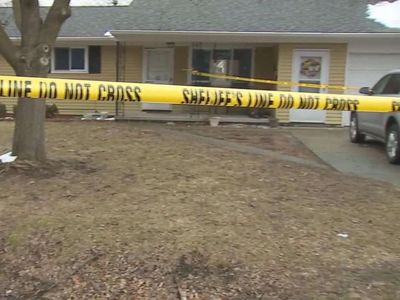 The couple’s two children -- a third-grader and a fourth-grader -- were at school at the time of the shooting, Johnson said.

The wife did not have any sort of protection order against her husband, Johnson added.

Undersheriff Michael McCabe confirmed authorities had been to the couple’s home three times in recent years, but none of those visits involved domestic violence complaints. Twice when officials visited on complaints there was a loud party at the residence, and another time they visited for a “mental health commitment” for the wife's 19-year old son, Johnson said.

The suspect is being held at the Oakland County Jail at the moment.