Tampa and Clearwater bar owners protest to reopen their businesses 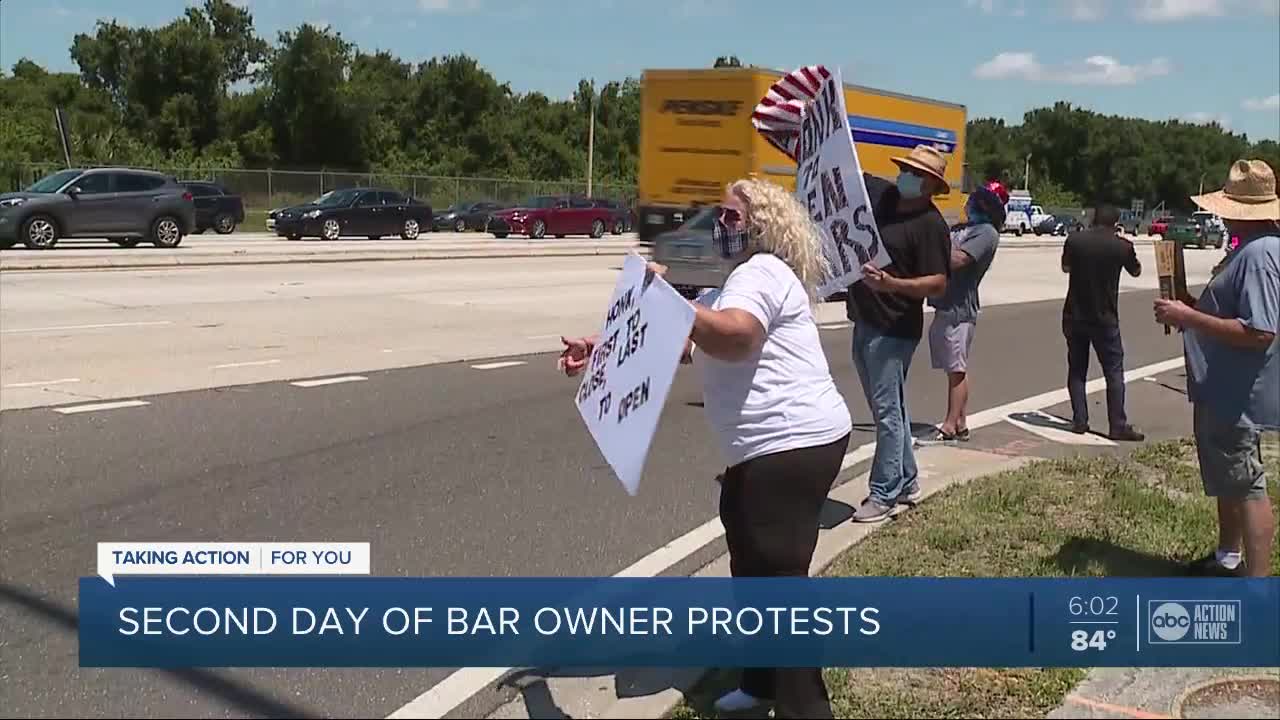 Tampa Bay area bar owners and staff are protested Wednesday to be allowed to reopen their businesses immediately. 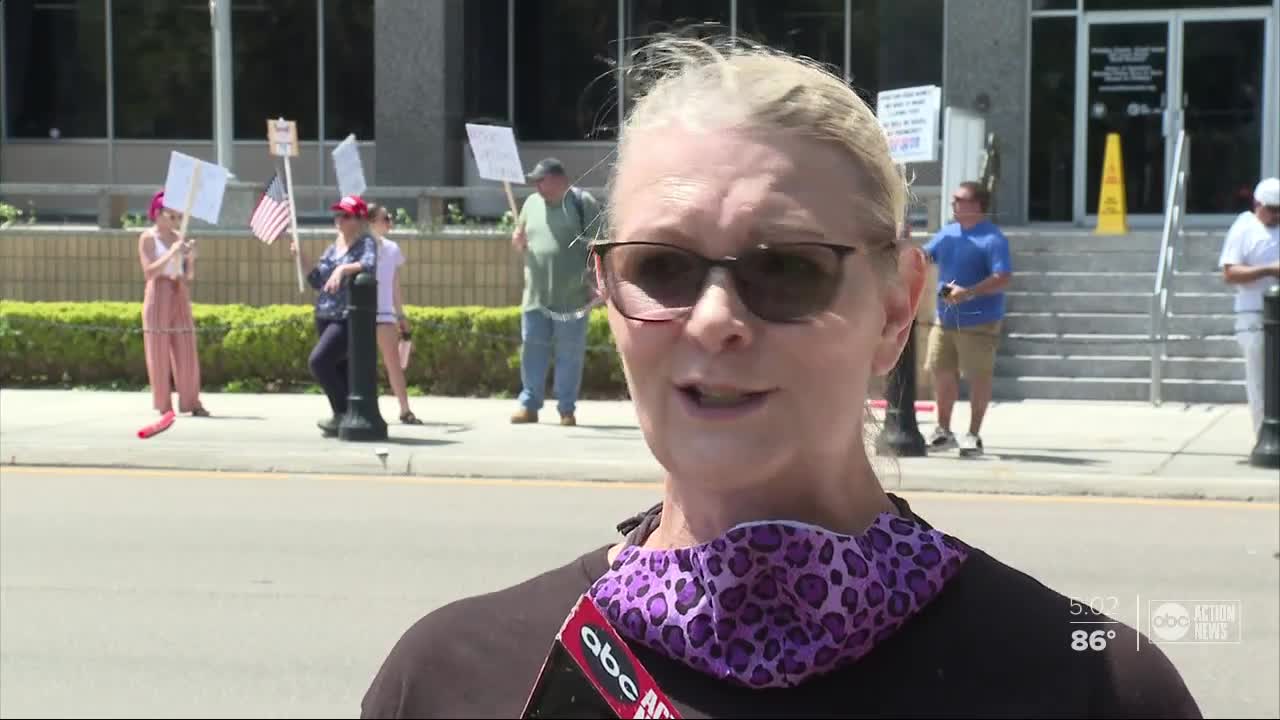 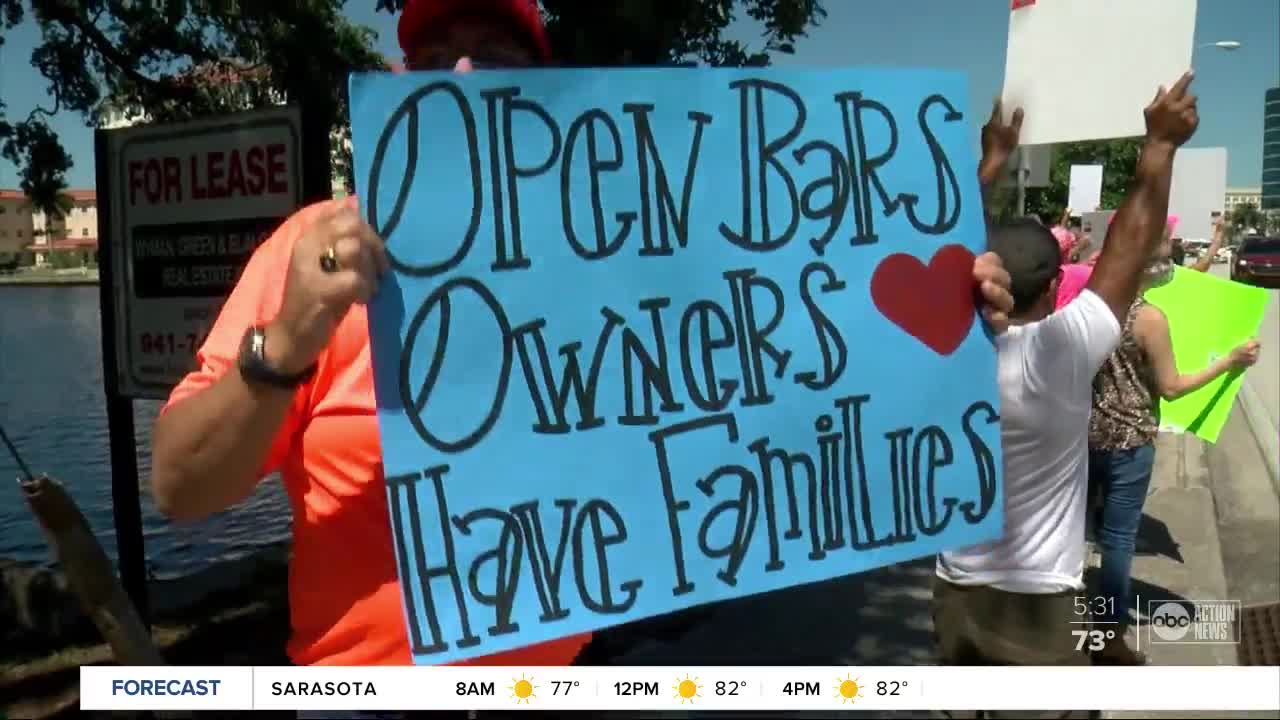 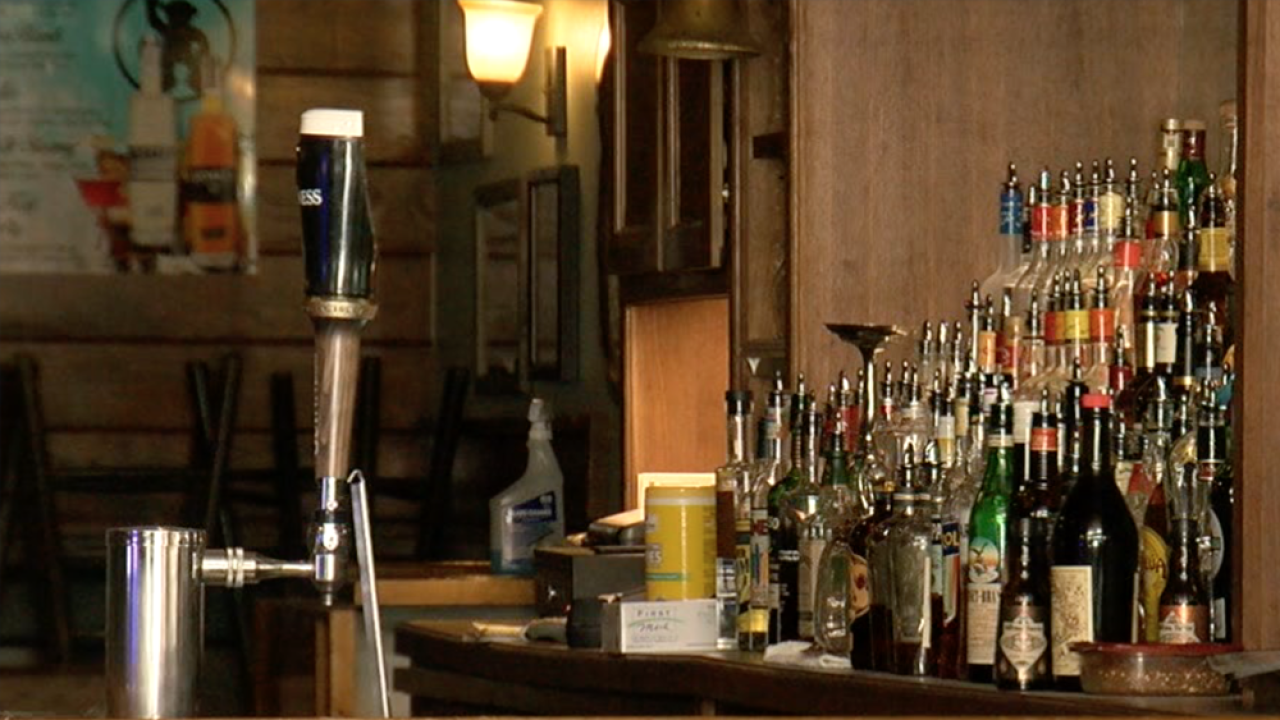 They say it's unfair that restaurants that serve alcohol can reopen, but they can't. They're even more upset that breweries in Pinellas County were given the green light to reopen as long as they have a food truck operating on site.

RELATED: Bar workers protest not being able to work, call for bars to reopen

Hundreds of people lined the streets of Clearwater, Tampa and Bradenton Tuesday and Wednesday as part of the #BarsCanOpenSafelyFlorida protests. The protests Wednesday took place outside the Pinellas County Commission Building in downtown Clearwater and at the corner of Dale Mabry Highway and Columbus Drive in Tampa.

Organizers are asking for their voices to be heard on opening bars, and are aiming to catch the attention of Gov. Ron DeSantis.

The bar and nightclub industry have been closed for two months. The businesses are technically part of Florida's second phase of reopening, but the businesses believe it is unfair that other similar businesses have been allowed to reopen.

On Wednesday, many held up signs in a show of support for reopening bars, pubs and nightclubs. Many of the signs talked about the need to make money to support their family members and how bars are willing to put in new protocols to keep people safe.

Bars and nightclubs have been closed throughout the state since March 17.

On Tuesday, leaders in Pinellas County announced that breweries were allowed to open under current rules with restrictions.

Bar owners said they are concerned they were not even allowed to partially open in Phase I of Florida's Reopening Plan.

"Companies like Amazon, Walmart, Costco, and liquor stores have been allowed to stay open throughout this process," said Rich Bantock, one of the organizers of the "Bars Can Safely Open" protests in a message to bar owners. "Malls and other mass retailers are open. With all that said, we are not allowed to open in any capacity, and we are not given a timeline when we can open," Bantock said in their appeal to other bar owners to come out and protest. "It is now time to take matters into our hands as we need to come together and organize."

Katie Brook, who works at the Silver Dollar Saloon in Plant City, says they are willing to make changes to comply with social distancing.

“We would take chairs out, tables out. We would keep it at a minimum capacity, wear masks, put hand sanitizer by the door. We would do anything at this point just to go back to work," Brook said.

“We were the first to close and we don’t even know when we’re going to reopen," Ackerman said.

We took their concerns to the Pinellas County Sheriff who agrees that the reasoning behind some businesses reopening and not others is unfair.

“I’m sure the bar owners are asking that same question why can’t they add a food truck and reopen and do the same thing? That’s not my decision. That’s coming from the state and that needs to be directed to the state but I see their frustration," he elaborated.

Gualtieri says they're relying on the guidance from the Department of Business and Professional Regulations.

“Please listen. Give us a fair shot. That’s all we’re asking for," Richard Bantock, the owner of Sports Rock Bar in Largo plead.