Florida Fish and Wildlife Conservation Commission officers are heading out on critical missions to rescue stunned sea turtles and manatees during the cold weather.

As the eastern seaboard is dealing with blizzard conditions, Florida is feeling the effects with below average temps across the state.

The temps are affecting the state's unique and treasured fish and wildlife species.

Florida Fish and Wildlife Conservation Commission officers are heading out on critical missions to rescue stunned sea turtles and manatees during the cold weather. 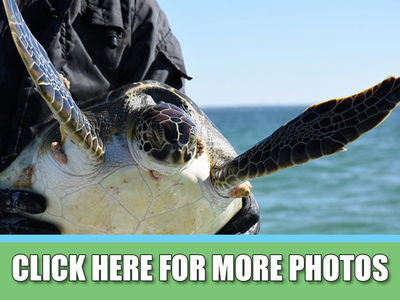 Over the past week, FWC officers have rescued more than 200 sea turtles along the Florida coast.

Keith Kolasa of Hernando County Aquatic Services and Waterways took a crew to try and rescue turtles on Friday. He said, "We were expecting to find maybe one or two but it looks like the cold has impacted them a little bit more than we thought."

The crew rescued five turtles in less than two hours. Brittany Hall-Scharf from Sea Grant said, "The air temperature is colder than the water so if they’re already stunned in the water, trying to transport them in the air and make them even colder." Which is why rescuers have to work fast and make sure to cover the sea turtles in blankets and towels when transporting them to agencies who can help them.

When sea turtles are exposed to cold temperatures, they may float lifelessly in the water on or near the shore. Officials say the sea turtles can appear dead but they are often still alive. The FWC is asking anyone who comes across a cold-stunned sea turtle to report them to the FWC Wildlife Alert Hotline (888-404-3922) as soon as possible.

More information from FWC about their efforts.