Police say they may be heading to Florida

The Lima Police Department in Ohio has issued a statewide endangered missing child advisory for four children taken by their mother who doesn't have custody of them.

Four endangered missing children were located safely after The Lima Police Department in Ohio issued a statewide advisory when they were taken by their mother, who didn't have custody of them.

According to a release, Damara Croley,13, Benjamin Karl-Leland Croley, 12, Patience Wilson, 9, and Damien Wilson, 8, were taken by their non-custodial mother Marianne Merritt.

However, Merritt and her boyfriend Charles Perkins were found and taken into custody. The mother was held on suspicion of interference with custody, and the boyfriend was arrested on an active warrant.

The kids are in the temporary custody of Allen County Children's Services. 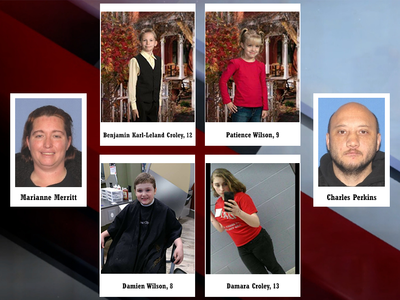 Merritt was said to be headed to Florida with the children in a dark blue 2000 Chrysler Voyager with Ohio license plate: FMQ3175. However, they were ultimately located in Kenton, OH.

Authorities said Merritt's boyfriend, Charles Perkins, was with them. He is said to be abusive towards the children and has active warrants. He is considered armed and dangerous.